Thursday, May 13th 2021, 3:21 pm - Manitoba Wildfire Service is warning the public to avoid the Toniata area.

The public is warned to avoid a section of southeastern Manitoba as several fire crews and water bombers work to extinguish a large forest fire.

The Manitoba Wildfire Service issued a warning about a fire in the southern part of Whiteshell Provincial Park Wednesday afternoon. The service specifically warned to avoid the area around Toniata, a community about 140 kilometres southeast of Winnipeg on the north shore of Falcon Lake.

Firefighters from the Southeast Whiteshell Fire Department, four Wildfire Service crews and water bombers from Manitoba and Ontario are working to put out the fire, which spans roughly 30 to 40 hectares (about 74 to 99 acres), a provincial government spokesperson told CBC News.

The public is urged to stay away from the area for their own safety and so fire crews have room to work, the spokesperson said.

Efforts are being made to protect buildings, trailers and cottages in the area, the spokesperson said. 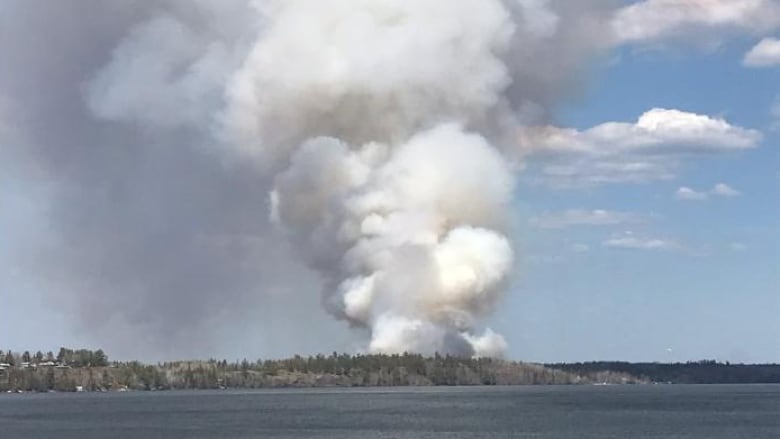 The Manitoba Wildfire Service warned the public to avoid an area in the southern part of Whiteshell Provincial Park Wednesday as crews fight a fire. (Dana Moore/Submitted to the CBC)

Dana Moore watched the smoke rise from the relative safety of his place on the south shore of Falcon Lake, but he couldn't help but think about some friends who lost their home in a fire earlier this year.

"It's very close to there … and it's close to some other places that are big businesses and people who really support this area," he told CBC Up To Speed host Faith Fundal Wednesday afternoon.

"It's worrisome for anybody, but it's really close to the people who kind of make this community."

Manitoba is experiencing a drought that has created extremely dry conditions that could allow wildfires to get out of control quickly. There are travel restrictions in place to prevent people from entering areas — including all provincial parks south of the 53rd parallel — suffering from the dry conditions.

Such restrictions were issued for Area 2, which includes the Whiteshell and Falcon Beach area. The Manitoba government has cancelled all existing provincial burning permits in that area and no new permits are to be issued there.

Boats can only be loaded and launched from "developed shorelines," while aircraft can land and take off from developed docks or shorelines.

This article, written by Nicholas Frew, was originally published for CBC News.