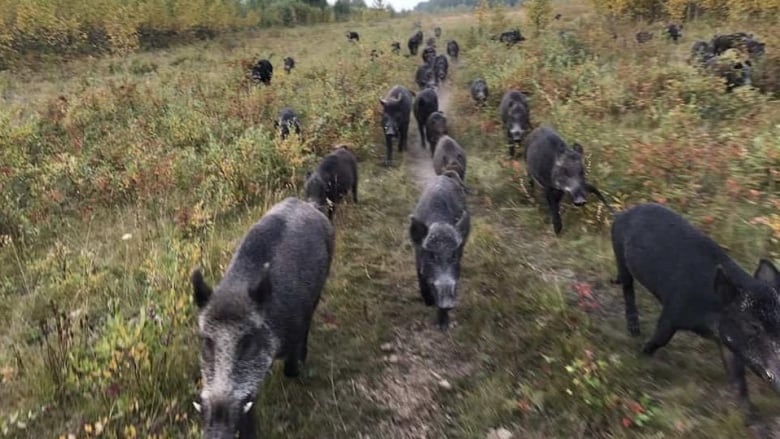 Wild pigs have infested parts of Saskatchewan, rooting up crops, plundering endangered bird habitats and reproducing so virulently they could soon outnumber people in the province, according to one expert.

Wild pigs made news recently when they were found in Elk Island National Park near Edmonton, the first time the invasive animals were located within a Canadian National Park.

Ryan Brook of the Canadian Wild Pig Research Project, based out of the University of Saskatchewan, said that while the Elk Island sightings hit the headlines, there are more wild pigs in Saskatchewan than anywhere else in Canada.

"We are well on track to have more wild pigs than people here in Saskatchewan," Brook said.

He said the wild pig population is largest in east central Saskatchewan, where they can hide in the bush and feast on cropland.

"It has all the characteristics of an ideal pig stronghold: Big huge chunks of forest and in areas that are hard to access with lots of wetlands."

While the animals often move around at night and keep well hidden, Brook said they have been spotted in large numbers near Prince Albert National Park.

"They eat virtually everything and live in almost any habitat. So they're perfectly adapted as an invasive species," Brook said. 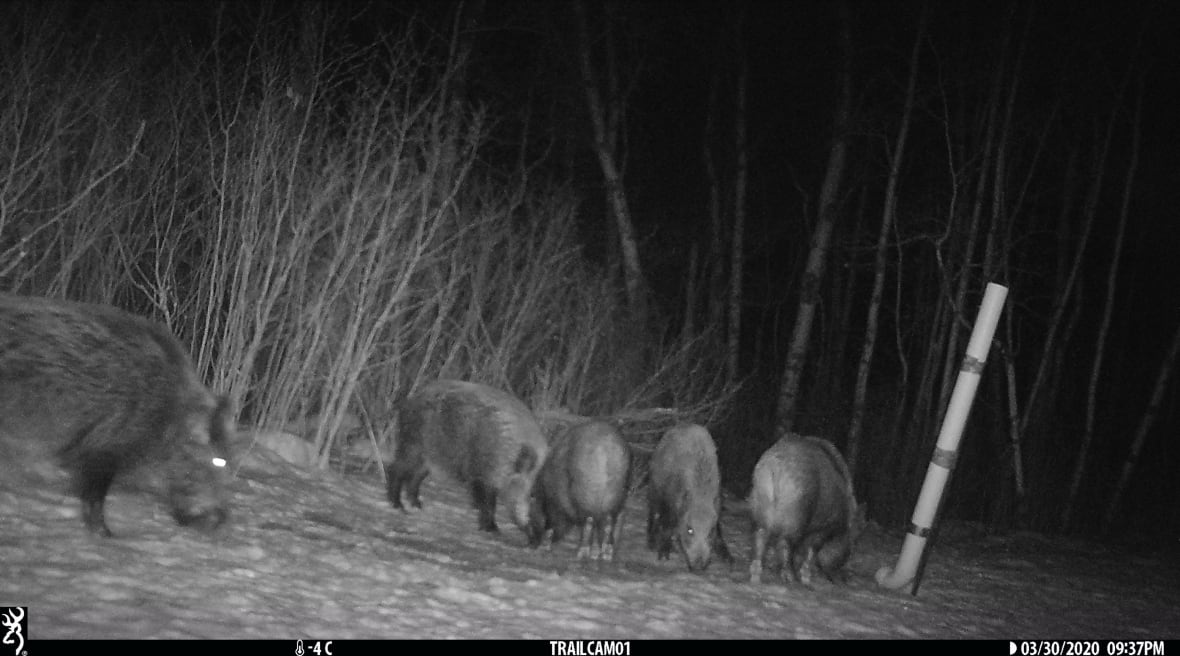 Wild pigs were first imported to Saskatchewan and Alberta in the 1990s to help farmers diversify their operations. However, some escaped and have thrived in Saskatchewan's rural areas.

Wild boar are smart and destructive. They adapted quickly to the Canadian climate and are difficult to hunt, Brook said.

He said an attempt to cull their numbers by opening hunting season on them failed. Instead, he said, it made the pigs smarter, driving them into hiding and turning them into nocturnal creatures adept at avoiding humans.

"If you want lots and lots of wild pigs, open it up to sport hunting."

Sows can produce two litters each year with up to 12 piglets per litter, further adding to the pig population problem. The animals are large, some topping out at 300 kilograms, Brook said.

"They are often referred to as an ecological train wreck because they just destroy natural environments. And so they get into wetlands and they tear them up and they eat the roots of the plants and they wallow in the mud and they spread their fecal matter," Brooks said, adding that the pigs also spread disease.

He said endangered piping plovers are particularly at risk from the wild pigs who eat eggs from shoreline nests.

"Pigs have the opportunity to not only walk up and down the shorelines and gobble up the young and the eggs ... but also to destroy their habitat."

In Brook's view the problem is so severe in east-central Saskatchewan that the notion of eradicating wild pigs from the area is futile.

"Any notion of eradication is now long past. Saskatchewan will have wild pigs for at least about 1,000 years."

He said groups need to work at keeping the wild boar out of areas where they haven't yet taken hold, like Grasslands National Park, a delicate prairie ecosystem located in the province's southwest corner.

Brook said local landowners, farmers and First Nations should be enlisted to report wild pig sightings and trap the animals.

While it's impossible to know how many wild boar roam the Prairies, Brook said a collar-tracking system combined with reporting and trail camera sightings easily puts the number in the thousands in Saskatchewan.

"We have almost 56,000 occurrences of all pigs across Canada, with more than half that in Saskatchewan."

Wild pigs are enough of a problem there's a whole program designed to control them.

Darby Warner, executive director of insurance for the SCIC, said it operates 25 traps across the province and has caught 575 pigs over the past five years.

"They don't belong in Saskatchewan, I'd like to see them gone from the province," Warner said.

Most recently, SCIC received a report about a sounder of pigs roaming around the Melfort area. Warner said trappers were able to catch all 12 pigs.

"The whole goal has to be to take out the entire group at once. If you take one or two out of the group you just make the rest of them smarter."

This article, written for CBC News by Colleen Silverthorn, was originally published for CBC News on October 13, 2021.