For the first time, researchers have mapped the range of wild pigs across Canada and found the invasive swine are expanding at a rapid rate.

Wild pigs are now Canada's most prolific invasive mammal, according to what the University of Saskatchewan calls the first-ever published survey of their distribution in Canada — and they're causing an "ecological disaster."

Wild pigs are now Canada's most prolific invasive mammal, according to what the University of Saskatchewan calls the first-ever published survey of their distribution in Canada — and they're causing an "ecological disaster."

"They'll root up the vegetation like a rototiller," said researcher Ruth Aschim. "They're rolling around in the water, defecating in it."

"There is crop damage, disease transmission, even automobile crashes with these pigs."

The wild pigs are the legacy of a failed attempt to diversify meat production with wild boars.

The porcine pests were imported from Europe in the 1980s and 1990s for livestock or "penned game" for hunters.

Many boars escaped their pens and mated with pigs, said Aschim, and they're now causing damage wherever they go.

The wild pigs are rooting and wallowing from B.C. to Quebec.

While most are in the Prairies, there are pockets in Ontario, Quebec, northeastern B.C., the B.C. Interior, and possibly even the Vancouver suburb of Langley.

Only Atlantic Canada and the territories lack populations. 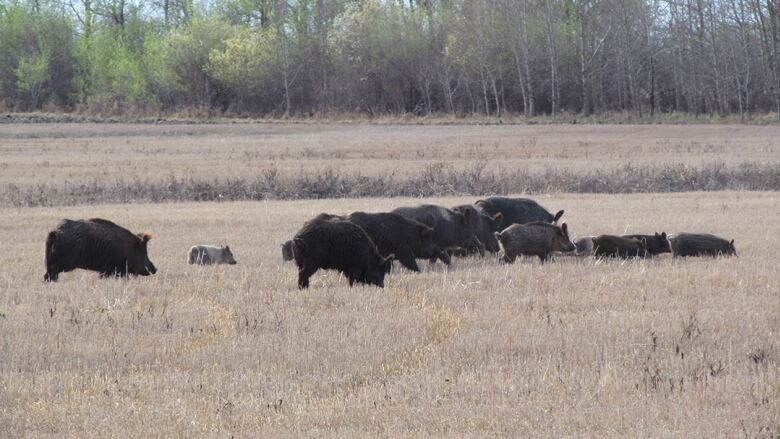 Researchers say wild pigs are an emerging crisis as their territory continues to expand across Canada. (Dan Sakal)

COME OUT AT NIGHT

"The public is not overly aware of the wild pig problem, because they are elusive and nocturnal," Aschim said.

They grow as big as 115 kilograms (250 pounds), can eat almost anything, become sexually mature in four to eight months and have about six piglets in a litter.

Researchers add they're hardy in the winter as well, burrowing into "pigloos" in the snow.

The survey, published last week in Nature Scientific Reports, warns that wild pig populations and range will "continue to expand exponentially" over the next decade at least, if aggressive management policies are not implemented soon.

How the range of wild pigs in Canada has grown over the past three decades. (Ruth A. Aschim and Ryan K. Brook/University of Saskatchewan)