Tuesday, August 11th 2020, 12:05 pm - After an oil spill into water, cleanup crews use booms, skimmers and sometimes even fire to remove the spilled oil from the water’s surface. None of this is possible if the oil sinks. 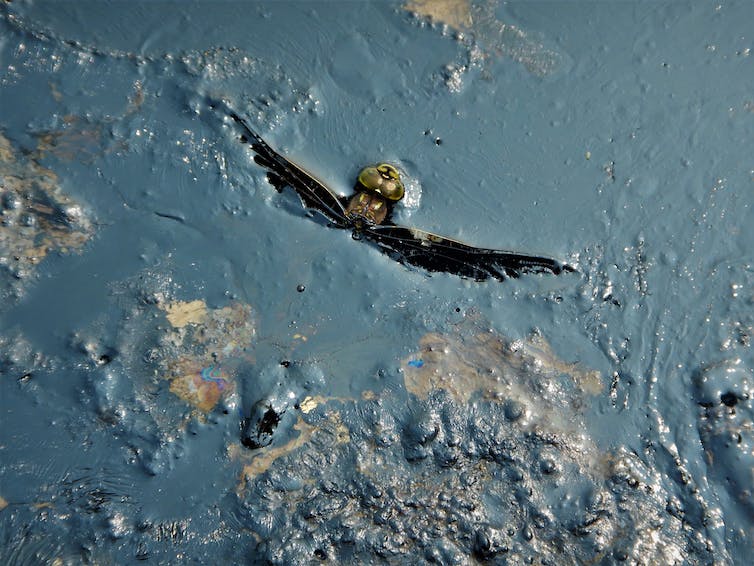 A captive adult dragonfly trapped in the sticky surface slick of Canadian diluted bitumen from a controlled experimental oil spill in a boreal lake located in Northwestern Ontario during the summer of 2018. (Jeffrey Cederwall)

Canada sits on the third-largest oil reserve in the world. Most of it is in the Alberta oilsands, where companies extract bitumen, a crude oil with the consistency of peanut butter.

To get the oil to pass through pipelines, petroleum engineers mix the oil with lighter components — usually byproducts of natural gas production — to dilute and liquefy the bitumen. This mixture is called “diluted bitumen” or dilbit for short.

Alberta is landlocked. To reach refineries and the international market, dilbit is transported through a network of pipelines and railways over vast stretches of land, riddled with lakes, rivers and wetlands.

But oil pipelines can leak or rupture, and spill their contents into the environment. In July 2010, for example, an Enbridge pipeline in Marshall, Mich., spilled at least three million litres of dilbit into the Kalamazoo River, of which an estimated 680,000 litres sank.

The issues of inland spills aren’t new. They are more common than marine spills but often overlooked or unreported. Generally, we know much less about how oil spills affect freshwater ecosystems than the ocean and, when it comes to dilbit spills, we know even less.

To find out, our research team carefully spilled dilbit into mini-lakes to uncover the real-world responses of the oil and its impact on aquatic life.

WATCH BELOW: 10 YEARS AFTER THE BP OIL SPILL MARINE LIFE IS STILL BEING IMPACTED

We created mini-lakes with 1,400 litre tanks, filled with lake sediment, water and the natural community of microscopic plankton retrieved from a lake on the Canadian boreal shield. We then spilled a scaled-down volume of dilbit — less than two litres — into the “lake.”

We left the tanks exposed to sunlight, temperature changes and weather while we monitored the viscosity and density of the oil slick on the surface of the water. These parameters are important for understanding when the oil might sink and how it can be cleaned up. We also tracked the oil beneath the surface, its chemical composition and its impact on the plankton living there.

Crude oil floats because it is less dense than water, allowing spilled oil to be skimmed off the water surface. But this isn’t always true for heavy Canadian crude oil.

Dilbit can sink under certain conditions, such as a turbulent river with a lot of suspended sediment and other particles. These particles can bind to the oil and make it denser, as happened on the Kalamazoo River in 2010.

Past research using wave tanks has suggested dilbit would not sink in a lake. Other studies in test tubes have shown that dilbit can sink, but only when vigorously mixed with much more suspended sediment than what is typically experienced in nature.

Our research showed that after only one day, dilbit became too viscous for conventional cleanup methods to perform well. When it rained eight days after our experimental spill, the dilbit slicks broke up and about half of them sank to the sediment in these mini-lakes.

After an oil spill into water, cleanup crews use booms, skimmers and sometimes even fire to remove the spilled oil from the water’s surface. None of this is possible if the oil sinks.

To clean up sunken oil, the submerged oil and sediment must be dug up. This invasive removal is both expensive and may further harm an ecosystem by removing entire communities living in the sediment and re-suspending oil back to the water column. Sinking substantially increases the cleanup costs and timelines and reduces recovery.

If the spilled dilbit gets too viscous, conventional skimmers don’t work well, but if it gets too dense it sinks.

Our results show that dilbit can sink in lakes given enough time, and highlight the need to consider different weather scenarios in risk assessments.

WATCH BELOW: OIL AND GAS IS CONTRIBUTING MORE TO GLOBAL WARMING THAN WE THOUGHT

LIFE UNDER AN OIL SLICK

Plankton are microscopic organisms that form the base of the food web that supports fish populations. They are also quite sensitive to environmental changes, such as a dilbit spill, making them an ideal group to study.

We found that dilbit spills reduced the overall amount of the zooplankton and algae in the water, but not all species were affected to the same degree.

Some algae species showed signs of recovery after the dilbit sank, but zooplankton appeared more sensitive in the long-term. Larger zooplankton are an important food for fish, so if their numbers drop for a prolonged period, fish could starve. Our initial study lasted 11 days, so we don’t know if this would occur.

Bacterial abundance, on the other hand, increased following the dilbit spill. The composition of the bacterial community shifted to include more oil-eating microbes, which could help mitigate some of the impact of residue oil.

We have seen this before in the ocean. After marine oil spills, bacterial blooms of oil-eating microbes are common.

Oil breakdown by bacteria offers a promise for some remediation following spills but is likely not a silver bullet, especially for heavy oils such as dilbit. After a dilbit spill, most of the heaviest petroleum compounds comprising natural bitumen will still likely remain, as oil-eating microbes prefer lighter, more accessible oil.

RESEARCH COMING DOWN THE PIPELINE

We know that freshwater dilbit spills may have different implications for clean up and can dramatically affect aquatic life in the short-term, but we still need to understand the long-term impacts of dilbit in a variety of environments and spill sizes.

In 2018, we conducted a larger study using in-lake enclosures at the IISD-Experimental Lakes Area, a research facility in northwestern Ontario that’s world-renowned for hosting experiments in whole lakes. Research from these experimental lakes has shaped water quality policies, such as acid rain and phosphates, by providing more accurate answers than those that come from a lab test tube. 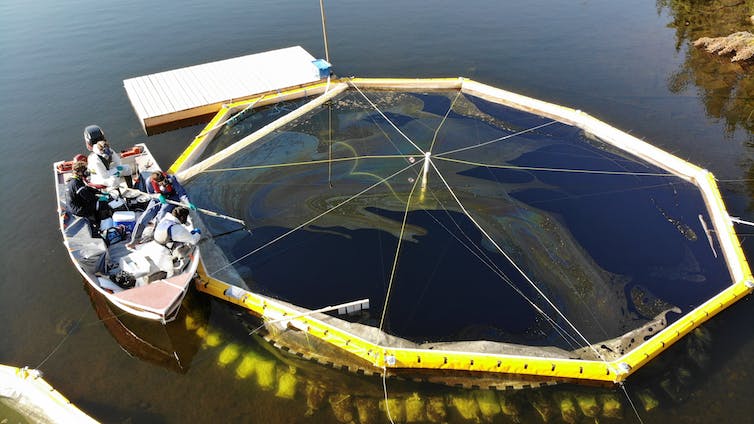 However, unlike typical whole lake studies, we did not just release dilbit into a single lake. By using large in-lake enclosures, we created seven different spill sizes, using multiple levels of oil containment to prevent an intentional oil spill from becoming a terrible accident.

No one wants an oil spill in their backyard, but sometimes recreating these accidents through small controlled spills is the best way to understand them.