Thursday, July 9th 2020, 11:31 am - Explanations range from climate change to food supply — or maybe they've been here all along.

Climate change, a supply of seals to eat and effective conservation in the United States are all possible explanations for the apparent increase in great white sharks in Atlantic Canada, according to a newly published paper in the Canadian Journal of Fisheries and Aquatic Sciences.

The peer-reviewed report, led by authors from the University of Windsor in Ontario, speculates on why more of the apex (top-of-the-food-chain) predators are being seen in the summer months, especially off Nova Scotia.

One hypothesis is that the great white shark's range has shifted, bringing them into an area where they were rarely seen in the past.

"A northward range expansion could be related to multiple factors, including warming Canadian waters due to climate change, population recovery and/or increased regional prey abundance," the authors state.

Or maybe they've been here all along and we didn't notice.

"A large, highly mobile, predatory shark may have been historically abundant in Canadian waters yet considered 'rare' simply due to our inability to observe them," the paper states.

It documents records of 60 great white shark "observations" in Atlantic Canada between 1872 and 2016: There were 27 sightings; 26 caught in nets; and seven others inferred from teeth in gear and wounds on seals and porpoises. 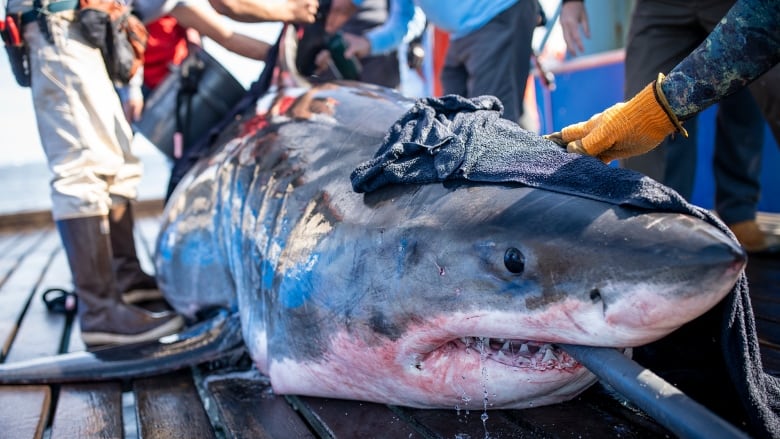 The report is based primarily on satellite tracking data from Florida-based Ocearch, which tagged this female shark in the northwest Atlantic and named her Unama'ki. (Robert Snow/Ocearch)

WHAT THE TAGGING SHOWS

The report is based primarily on satellite tracking data from Florida-based Ocearch, an organization that collects and publishes ocean data, in part through tagging sharks and taking samples from them. The organization staged heavily promoted and highly publicized tagging events off Nova Scotia in 2018 and 2019.

Over the two-year period, 17 great white sharks were captured — most at Ironbound Island near Lunenburg, N.S., and some near Scatarie Island off Cape Breton. Holes were drilled through their dorsal fins, and they were fitted with a satellite-transmitting tag.

Because the satellite tracking data is not precise, hot spots for occurrence were estimated based on modelling.

The authors suggest great white sharks may move north in the summer months because ocean temperatures off the United States are getting too warm and Canadian waters are now just warm enough.

"An increase in Atlantic Canada white shark sightings in recent years may therefore be the result of white sharks seeking cooler northern waters during the warm summer months," the report states.

They may also be attracted by more abundant prey as grey seal populations explode.

"It is therefore possible that with greater prey availability, white sharks are experiencing a similar increase in fecundity and survival rates. An increase in shark sightings in Atlantic Canada due to an increase in the local seal population would mirror that observed in Massachusetts," the report states.

White shark populations have grown in the Massachusetts area in recent years as conservation measures to protect seals have resulted in their population rebounding in that area, as well, the report notes.

VIDEO: SHARKS ARE IMPORTANT. HERE'S WHY.

Canada's Department of Fisheries and Oceans (DFO) also tagged a great white shark, a young male, in Nova Scotia off Port Mouton in 2018.

It was the first great white shark tagged in Canada.

That shark and a female tagged off Cape Cod spent the summer of 2018 off Nova Scotia.

The tracking device showed what appeared to be a search pattern to intercept grey seals moving from the huge colony on Sable Island to areas where seals come ashore in Nova Scotia and elsewhere on the eastern seaboard.

It is part of a government effort to identify where the endangered predator lives — its "critical habitat" — when in Canada.

"We are talking low numbers," she said.

To put the numbers in perspective, it took DFO three days to find the great white off Port Mouton and three hours to find 15 off Cape Cod.

The DFO research was not affiliated with Ocearch, and the data it generated does not appear to have been used in the Fisheries Journal article.

The corresponding author, Nigel Hussey, of the University of Windsor, did not immediately respond to an inquiry from CBC News.

This article was written for the CBC by Paul Withers. Epic thumbnail image courtesy of Pixabay