Imagine walking through a tropical forest as a sweet scent wafts through the air. A little farther down the path, the putrid stench of rotting flesh makes you catch your breath. Upon investigation, you find that both odors originate from flowers – but why do flowers smell like anything at all?

It’s actually part of a strategy that helps flowering plants reproduce themselves and spread their species. Certain scents help these flowers solve a big problem.

Plants flower to produce seeds that can go on to become new plants. To make a viable seed, pollen from one part of the flower must fertilize the ovules in another part of the flower. Some plants can self-pollinate, using their own pollen to fertilize the ovule. Others require pollen from another plant of the same species – that’s called cross-pollination.

So how does one plant get some other individual plant’s pollen where it needs to be?

Sometimes gravity helps pollen fall into place. Sometimes wind carries it. Wind-pollinated flowers, like those of many trees and grasses, don’t produce a scent. 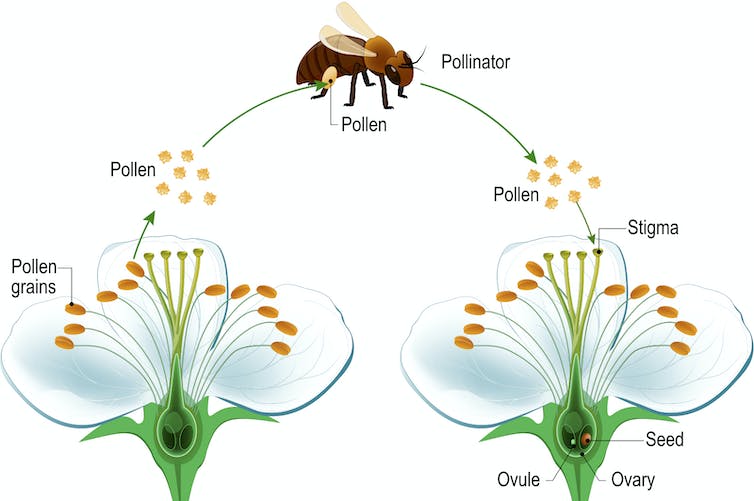 Animal pollinators can carry pollen from one flower’s stigma to another flower’s ovule as they forage for food. ttsz/iStock via Getty Images Plus

Other flowers are pollinated by birds, bats, insects or even small rodents carrying the pollen from one flower to another. In these cases, the flowers might provide a little incentive. Animal pollinators are rewarded by sweet energy- and nutrient-rich nectar or protein-packed pollen they can eat.

Flowers that need the help of insects and bats go one step further, producing a floral scent that acts as a smelly kind of welcome sign for just the right pollinator.

An orchid blooming in the tropical forest or a rose in your garden needs to attract a pollinator to bring pollen from flowers of the same species. However, there are flowers which look similar but are from other species. To differentiate itself from other flowers, each species’ flowers puts out a unique scent to attract specific pollinators.

Similar to the perfumes at a department store counter, flower scents are made up from a large and diverse number of chemicals which evaporate easily and float through the air. The type of chemical, its amount and its interaction with other chemicals give the flower its unique scent. The scent of a rose may consist of as many as 400 different chemicals.

People can smell these floral scents because they easily evaporate from the flower, drifting on the air currents to attract pollinators. 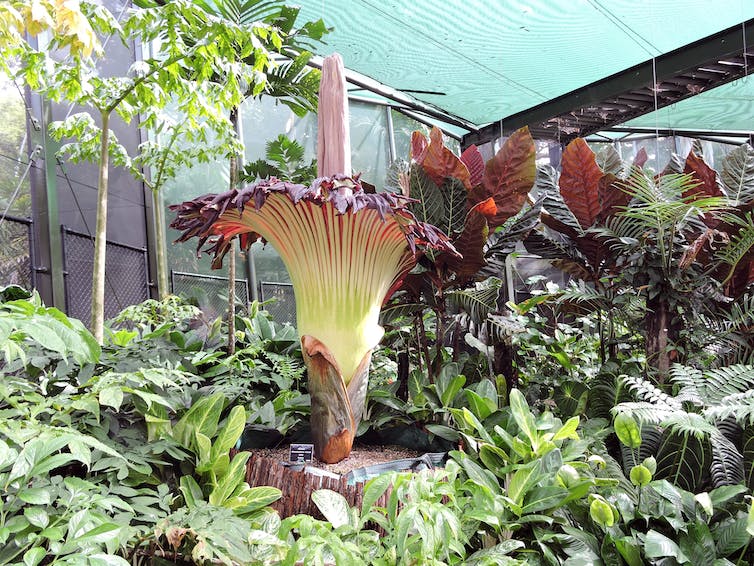 The giant corpse flower has a very stinky scent that its pollinators love. Photography by Mangiwau/Moment via Getty Images

Flower fragrances may be sweet and fruity, or they can be musky, even stinky or putrid depending on the pollinator they are trying to attract. A blooming apple or cherry tree emits a sweet scent to attract bumblebees, honeybees and other bees. But stick your nose into the beautiful flowers of a pear tree – a close relative of apples and cherries – and you may recoil in disgust, as these flowers smell musky or putrid to attract flies as pollinators. Similarly, the corpse flower, native to Indonesian rainforests, emits a foul odor reminiscent of rotting flesh to attract flies and beetles to pollinate its flowers.

Moths and bats flying at night locate flowers by the scent some release after the Sun goes down. The night-blooming cereus, the saguaro cactus and the dragon fruit all have large white flowers which open at night – they seem to glow in the moonlight, making them visible to nocturnal visitors. Their strong perfume helps guide pollinators inside. While drinking the sweet nectar, the pollinator picks up pollen which it then deposits in the next flower visited.

Once pollinated, the flower stops producing a floral scent and nectar and redirects its energy to the fertilized embryo that will become the seed.