Thursday, May 9th 2019, 1:46 pm - Usually when Canada is at the top of an international ranking, it’s cause for celebration. Not this time.

A recent report by the International Energy Agency shows that Canada’s vehicles have the highest average fuel consumption and carbon dioxide emissions per kilometre driven. They are also the largest and the second heaviest in the world.

In short: Canadian vehicles are big, heavy and guzzle a lot of gasoline. For a country that is championing its climate action, how do we square these facts? 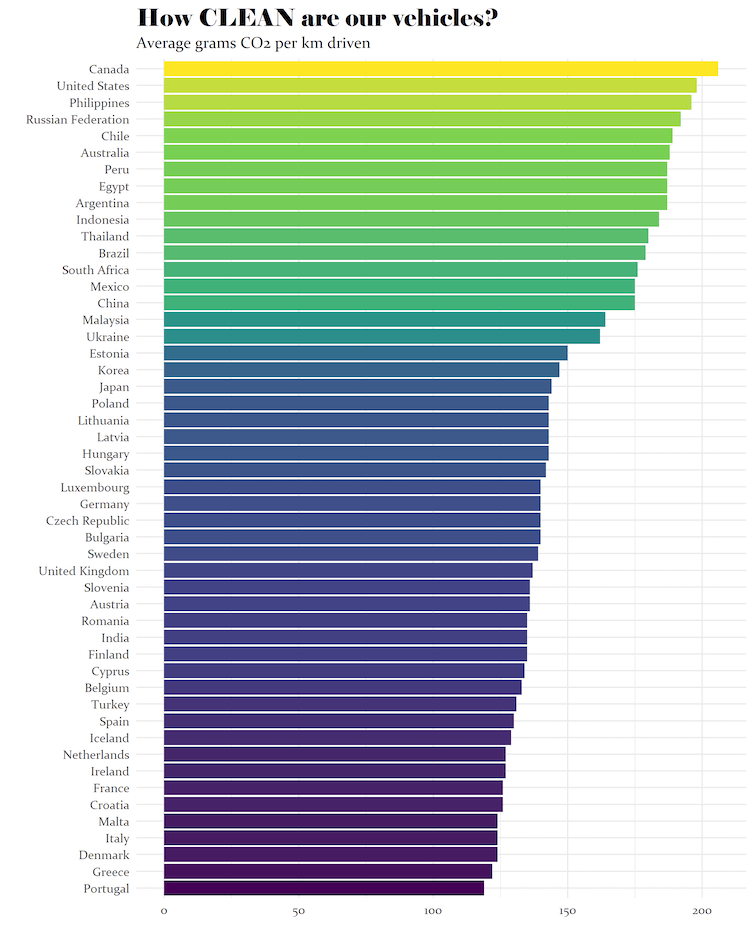 Many point to Canada’s vast land area — often connected with less-than-ideal roads and highways — and our cold climate as reasons for requiring more substantial vehicles. These arguments are not convincing.

More than 80 per cent of Canadians live in urban or suburban areas where a more modest vehicle suffices for most activities.

In terms of vast distances, that actually calls for better fuel efficiency, not worse. And if cold weather is the excuse for buying an SUV, similarly frigid countries — Sweden, Finland and Iceland — have all managed to survive with lower-emitting vehicles.

So what explains Canada’s preference for gas guzzlers?

North American vehicle manufacturers produce larger cars than their European and Asian counterparts. This in part reflects consumer preferences, but it is also the result of marketing campaigns and economies of scale in production that push buyers towards SUVs.

Fuel economy standards in Canada and the United States act to reverse this pressure, pushing manufacturers to produce more fuel-efficient vehicles. In part they have worked: the average fuel consumption of cars and trucks has fallen substantially since 2005. Even so, Canada’s average fuel consumption trend has flatlined recently, with almost no improvement since 2013. 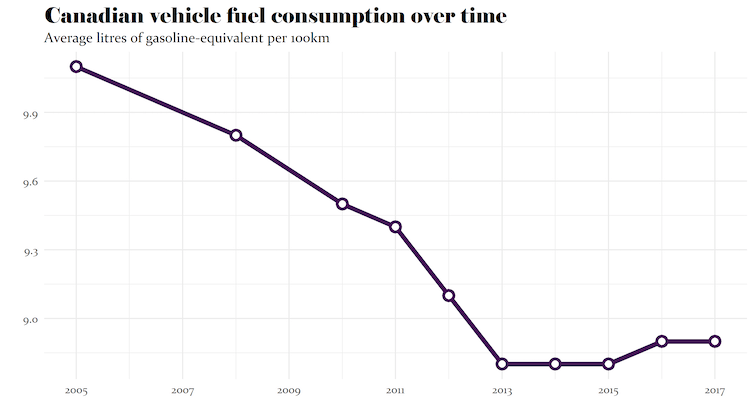 The slowdown in fuel economy improvements has a lot to do with the types of vehicles Canadians buy. The Toyota Camry and Honda Civic, once the mainstays of the average Canadian family, have given way to Ford F-150s and Dodge Rams.

The shift towards trucks, including SUVs, crossovers and minivans, in the past decade has been phenomenal. And before fingers point at places like Alberta, this is a trend seen across every province in Canada. 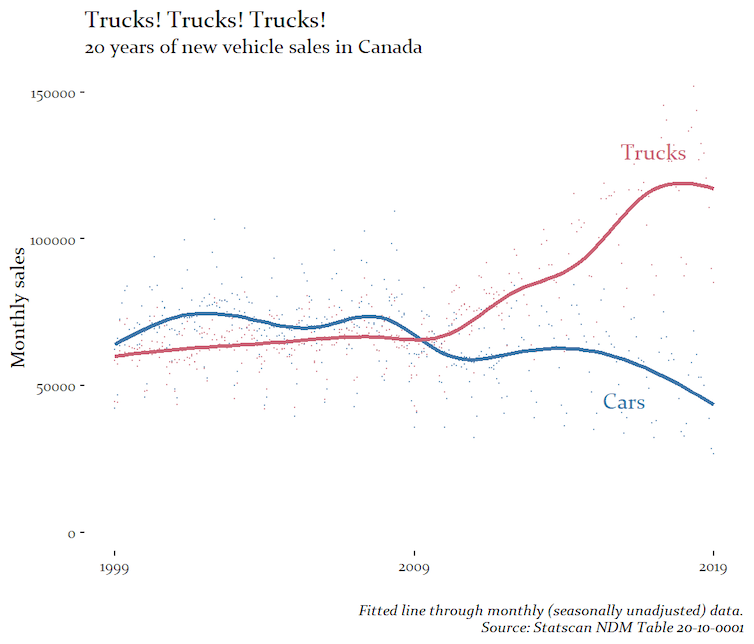 Canadians say they are now buying trucks in droves because they are safer.

The common wisdom is that bigger, heavier cars are safer in a collision. This is half right. Vehicle weight does affect the likelihood of a fatality from a collision, but only in a relative sense. 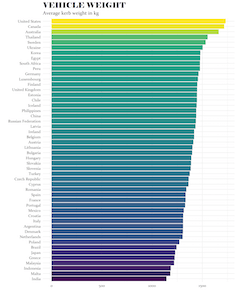 When similar-sized vehicles collide, it makes little difference to safety outcomes whether it is large-on-large or small-on-small. However, when a large vehicle collides with a small one, the results are (unsurprisingly) far worse for the small vehicle’s passengers.

This introduces the notion of vehicle-size externalities: buying a larger car imposes safety costs on drivers of smaller cars. It also raises the prospect of a vehicle arms race, with drivers buying ever-larger cars in order to protect themselves, when safety would be just as effective if everyone drove similar, smaller vehicles.

IT COMES DOWN TO COST

Far and away the biggest reason for Canada’s fuel inefficient vehicles comes down to cost. Simply put, the cost to purchase and operate a gas guzzler in Canada (or the U.S.) is far less than the rest of the world.

In Europe, vehicle registrations are often based on the vehicle’s fuel economy or emissions profile. In France, for example, car buyers face a sliding “bonus-malus” scale (or “feebate”). High-emitting vehicles incur a registration charge up to €10,000 while zero-emission vehicles receive €6,000 in rebates. And in Norway, where new vehicles are subject to a 25 per cent value-added tax and up to €10,000 in registration fees, electric vehicles are exempt from both charges. It is little wonder that Norway has highest share of new sales of electric passenger cars. 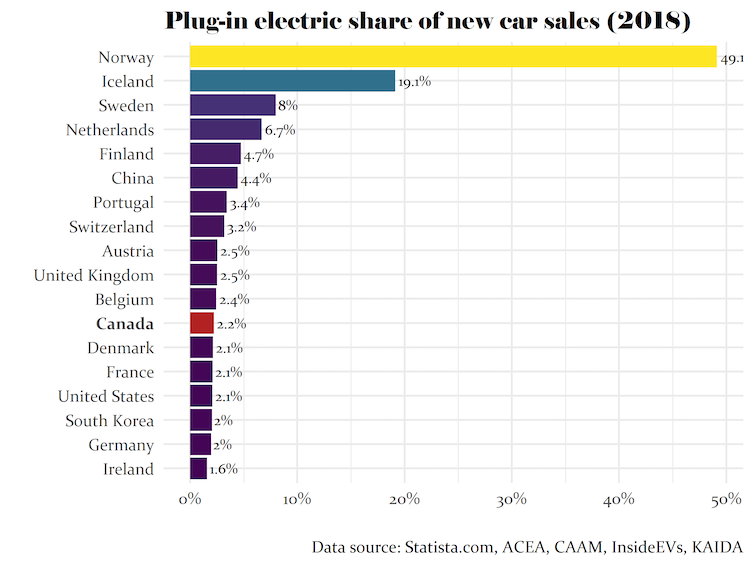 These upfront charges are often seen as alternatives to carbon taxes to shift consumers towards smaller, less emitting vehicles. And as Norway has shown, they can be effective.

However, other research has shown feebates are less cost effective than fuel or carbon taxes in reducing greenhouse gas emissions. Carbon taxes are better at targeting high-mileage drivers, and penalizing a gas guzzler that is driven sparingly can be a very ineffective (and costly) way to reduce emissions.

PAIN AT THE PUMP

But perhaps the most significant reason Canadians drive less-efficient vehicles is gas prices. There is a clear correlation between the price of gasoline and the average fuel consumption of vehicles. Where gas prices are low, as they are in Canada and the U.S., fuel consumption tends to be high. 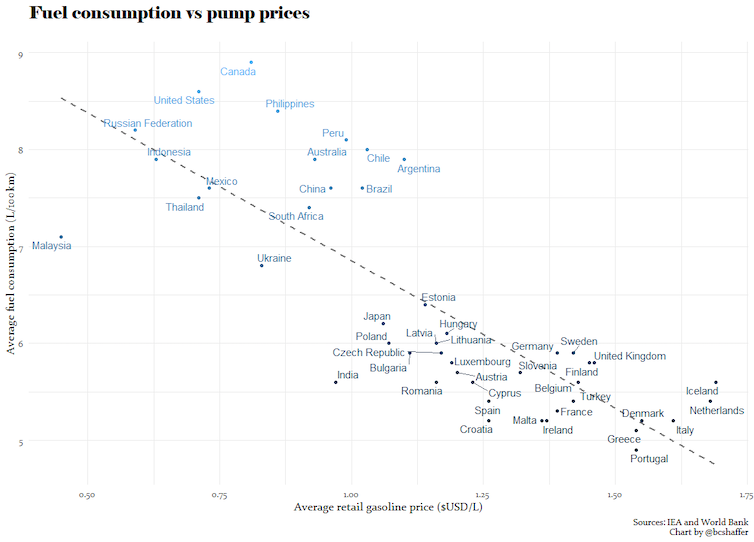 While most people focus on the role of carbon taxes to reduce emissions by discouraging driving, higher gas prices can also affect the choice of which vehicle to buy.

In the aptly named article “Frugal cars or frugal drivers?,” economists Werner Antweiler and Sumeet Gulati from the University of British Columbia looked at driver response to the provincial carbon tax.

They found that people started purchasing and driving more fuel efficient vehicles. According to their calculations, without B.C.’s carbon tax fuel, demand per capita would be seven per cent higher and the average vehicle’s fuel efficiency would be four per cent lower.

Carbon taxes may be unpopular with many, but they play an important role in determining what vehicles are on the road now — and in the future.

VIDEO: NOT YOUR USUAL TRAFFIC JAM