A growing body of research shows that SARS-CoV-2, the virus that causes COVID-19, can spread from person to person through the air. Indoor spaces with poor ventilation in areas where the virus is prevalent are particularly hazardous.

In the fictional world of “Star Trek,” public health officials and first responders would be able to determine instantly if a space had a dangerous concentration of airborne virus, and any other pathogen, by simply waving around a tricorder.

That technology, imagined 60 years ago, is still firmly in the realm of fiction. However, devices that can rapidly detect particular airborne pathogens – including SARS-CoV-2 – are in the works in various research laboratories.

THE AIR WE BREATHE

Detection of the presence of airborne virus particles is complicated by the mixture of other particles in the air. The atmosphere includes a large number of floating particles, a significant fraction of which are biological. Typically, with each breath, you inhale about a thousand biological particles.

These bioaerosols include live and dead organisms, including viruses, bacteria, fungi, pollen and plant and animal debris. Viruses are the smallest of these particles. They range in size from 10 to 300 nanometers, or millionths of a millimeter. In contrast, red blood cells average about 6 to 8 microns, or 6,000 to 8,000 nanometers, in diameter. Bacteria range from 1 to 4 microns and fungi 5 to 10 microns. Plant and animal debris is generally larger than 10 microns.

Most of these biological particles are not a health concern, because most are bits of plants and animals, including humans. However, it only takes a small number of dangerous microbes to produce a pandemic.

CAN COVID-10 SPREAD THROUGH AIR CONDITIONERS?

To understand the potential threat from bioaerosols, it’s important to identify the small fraction of problematic or pathogenic microbes from among all the bioaerosols present. Bioaerosol identification begins with capturing biological particles from the air, typically by collecting particles on a filter, in a liquid vial or on hydrogels.

Often, researchers transfer the collected bioaerosols to a culture medium that is designed to support microbe growth. How the microbes respond to a specific culture medium – the size, shape, color and growth rate of the microbe colony – can indicate the microbe species.

This process can take several days to weeks, and is often ineffective. It turns out the scientists can only identify about 1% of airborne microbes with this approach.

Increasingly, scientists are relying on gene-based analyses to map viruses and other microorganisms collected in air samples. One popular technique for gene-based analysis is polymerase chain reaction (PCR), which uses an enzymatic reaction to make many copies of a specific gene or portion of a gene so that the genetic sequence – DNA or RNA – can be detected in a sample. A PCR test can be designed to spot gene sequences specific to a microorganism so that detecting the sequence equals identifying the microorganism.

This technique is currently the gold-standard for detecting the presence of SARS-CoV-2 from nasal swab samples. PCR-based methods are very accurate in identifying pathogens.

Next generation sequencing technology makes it possible to rapidly sequence organisms’ whole genomes. Using these techniques, researchers now have the ability to understand the entire population of microorganisms — their diversity and abundance — in the air.

UV-C LIGHT IS BEING USED ACROSS CANADA TO DISINFECT, BUT CAN IT KILL COVID-19?

Despite these advances, there is still a lot of work to be done to be able to instantaneously identify the presence of pathogens in air. Current techniques for identifying microbes are expensive, require specialized equipment and involve long processing steps. They also can’t detect a species from small amounts of genetic material.

Recent advances, however, provide some promise for the development of sensors that can provide quick information about bioaerosols.

One approach uses laser induced florescence. In this technique, particles are illuminated with light of a particular color or wavelength, and only biological particles respond by fluorescing, or emitting light. This technique can be used to identify and quantify the presence of biological particles in air in real-time but it doesn’t differentiate between a safe and a harmful microbe. 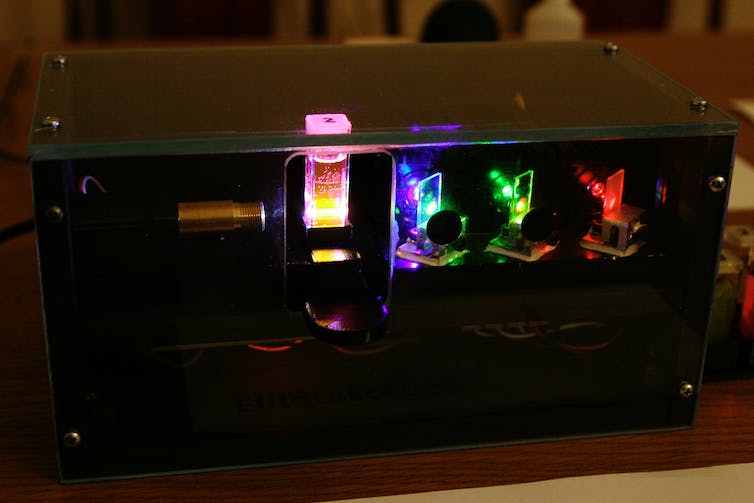 Laser-induced fluorescence is a method of using lasers to cause specific substances to emit light. Jan Pavelka/Wikimedia Commons, CC BY-SA

Another advance is using mass spectrometry for bioaerosol detection. In this technique, a single bioaerosol particle is blasted apart with a laser and the molecular fragments are immediately analyzed to determine the molecular composition of the particles. Researchers are also using Raman spectroscopy-based sensors. Raman spectroscopy can identify molecular composition from light reflected off of samples without destroying the samples.

BIG CHALLENGE IN A SMALL PACKAGE

These techniques are advancing instant detection and identification of airborne bacteria and fungi, but they are less efficient in detecting viruses, including SARS-CoV-2. This is primarily because viruses are very small, which makes it difficult to collect them with air samplers and difficult to perform PCR analysis given the small amount of DNA/RNA.

Researchers are working to address the limitations of detecting airborne viruses. In our lab at Clarkson University, we have developed a low-cost bioaerosol sensor and collector for wide-scale bioaerosol sampling. This battery-operated sampler uses a micro-sized high-voltage source to ionize airborne viruses, bacteria and fungi and collect them on a surface. Ionization gives the biological particles an electrical charge. Giving the collection surface the opposite charge causes the particles to stick to the surface. 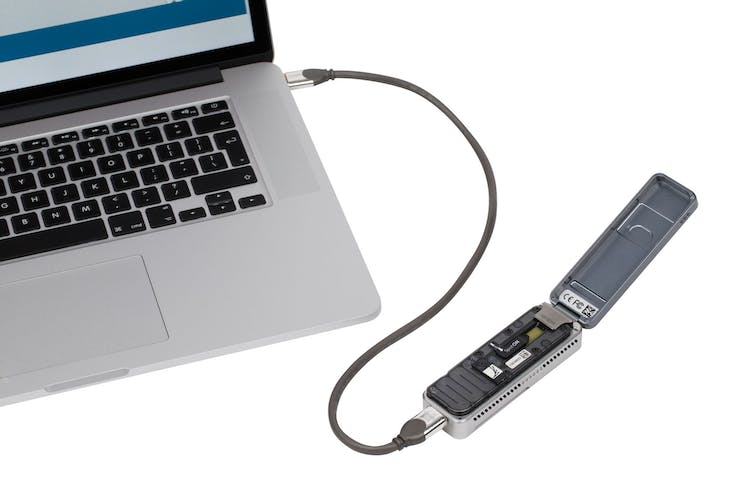 Samples from our collector can be analyzed with new portable DNA/RNA sequencers, which allows for near real-time bioaerosol detection with low-cost, hand-held equipment.

These advances could soon make it possible to detect a known pathogen, like SARS-CoV-2, with a portable device. But they’re still far from being a tricorder.

For one, they require relatively high levels of a pathogen for detection. Being able to identify a virus like SARS-CoV-2 at lower levels that are nonetheless sufficient for disease transmission will require developing sensors with lower detection limits. Additionally, these sensors can only be tailored to detect specific pathogens, not scan for all possible pathogens.

Though the equivalent of the tricorder in “Star Trek” isn’t around the corner, the need for such a device has never been greater. Now is an opportune time for the emergence of new sensing techniques piggy-backing on the dramatic advances being made in the fields of electronics, computing and bioinformatics. When the next new pathogen emerges, it would be nice to have a tricorder handy.