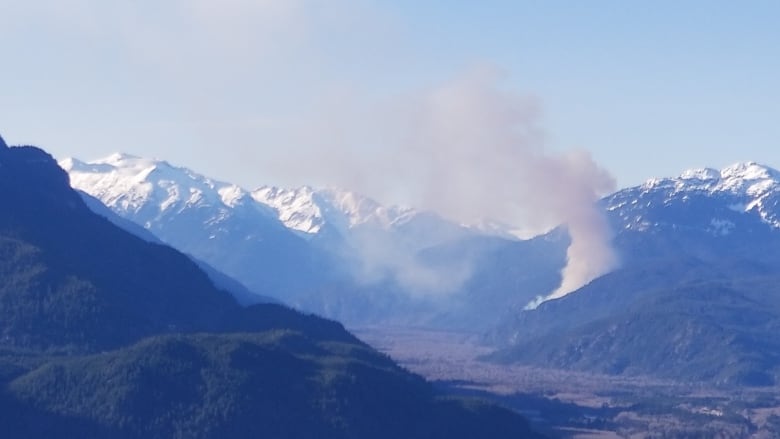 Smoke from a wildfire several hectares in size hovers over the Upper Squamish Valley.

A wildfire burning in the Upper Squamish Valley has grown to 15 hectares in size.

The B.C. Wildfire Service said the fire is burning in the 17.5-mile area of Squamish Valley Road, about 30 kilometres northwest of downtown Squamish.

"The fire is burning upwards and away from structures and does NOT pose a danger to residents at this time," the Squamish-Lillooet Regional District (SLRD) said in a release.

The fire, believed to be human caused, was about 3.5 hectares in size on Monday night but has since quadrupled in size.

The district said an initial attack crew and a helicopter are currently on site, with more firefighters being deployed Tuesday.

Heavy smoke was expected, and may be visible in Squamish and Whistler, the district says.

The area is heavily forested, but is home to several farms, cabins and campgrounds.

Glen McEachran, who lives in the area, said he heard from a local Facebook group that the fire started Monday afternoon at a hop farm.

"When the fire started, the fellow at the hop farm said he needed some help and then everybody that was around came running over, but pretty quickly the B.C. forest service fire crews were there and they took over," said McEachran.

"I guess it was burning up the mountain, but when I drove by I couldn't really see any flames. It was just smoke that I could see and a helicopter with a bucket flying around."

How wildfire smoke could mess with your summer plans Squamish Valley Road is still open at this time, but the SLRD asks that all non-essential travel be avoided due to safety concerns and to ensure uninterrupted access for wildfire crews and other first responders.

The district says rain is in the forecast for Tuesday evening through to the end of the week, and should help with fire suppression efforts.