Tuesday, January 7th 2020, 9:00 pm - Several chances for Lower Mainland snow round out the week before the real cold arrives.

Though the first major storm is winding down, B.C.'s active weather pattern continues, this time with chances for snow sneaking back into southern Vancouver Island and the Fraser Valley. That comes ahead of a much stronger system making its way in for Friday and the weekend -- a storm that stands to bring the first significant accumulating snow of 2020 to parts of the South Coast. We take a look at the chilly and snowy days ahead, below.

While the active pattern takes a bit of a breather on Wednesday and Thursday, an Arctic front dropping south through the second half of the week means we're far from done with the snow this week. As storms take a more north-to-south track across the region, less rain and more snow are in the forecast for the South Coast, even at lower elevations. Early Thursday will bring a shot of wet snow for parts of southern Vancouver Island, including Nanaimo and communities west of Victoria, and parts of the Fraser Valley. While Metro Vancouver will likely miss out on this first taste of snow, it won't be the only chance as we round out the workweek.

The risk for heavier snowfall, closer to sea level, comes as we head into Friday morning, and a shot of Pacific moisture joins forces with Arctic air sweeping down from the north. Metro Vancouver north of the Fraser down toward Abbotsford are all in line to see the first decent helping of snow for 2020 through Friday morning.

Arctic air filtering down through the province means that it's about to get cold for southern B.C. Daytime highs close to freezing will be the name of the game by the start of next week. That winter chill will leave conditions primed for more low elevation snow next week. As strong high pressure sits over the western Prairies, any systems moving toward the coast stand to be deflected southward -- potentially brushing the South Coast with additional rounds of flakes. 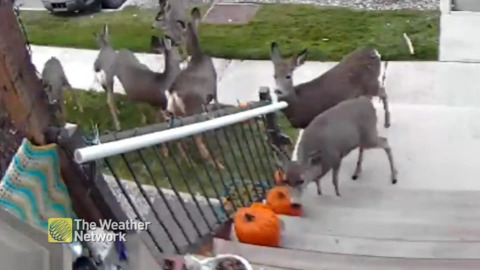