Record high water levels in the Northwest Territories led to record amounts of trace metals and hydrocarbons in watersheds over the summer, but the territory's environment department says that aren't expecting to see much of an impact on local wildlife.

The findings were presented to a standing committee of MLAs on Thursday, during a presentation on transboundary water agreements.

However, she said, the dissolved concentrations of those metals were much lower, and turbidity levels returned to regular levels starting in August. 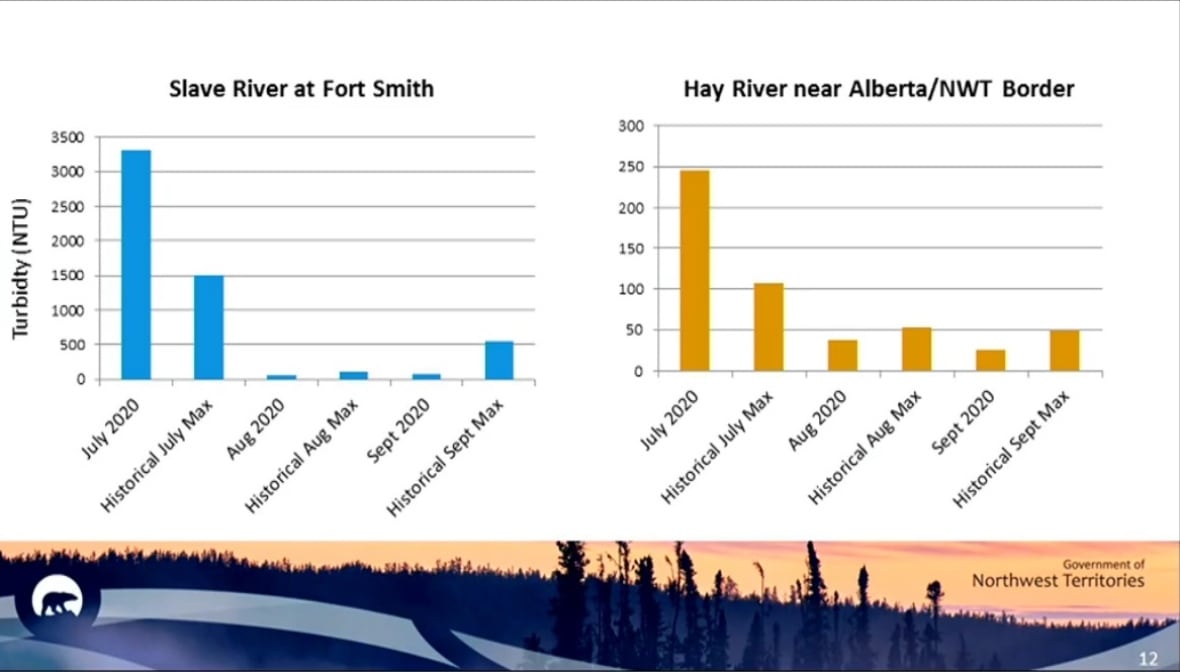 A slide from the territorial government's presentation shows turbidity levels in the Slave and Hay Rivers. Levels smashed historic highs in July 2020, but returned to normal levels in August and September. (N.W.T. Department of Environment and Natural Resources)

"The concentrations of metals in the Slave and Hay rivers this July should not have had any chemical-related impacts on aquatic organisms or fish," she said, adding that the dissolved concentrations of those metals were well below Health Canada guidelines for safe drinking water.

The concentration of hydrocarbons in the water, which the government attributed partially to oil sands development downstream, were also much higher than usual in July, but dropped back to regular levels in subsequent months.

"I take it you guys are just saying, 'well, it's dissolved into the water. It's dissipated somewhere.' I kind of have a hard time fathoming such a scenario," he said. "Because many times, you're also stating that they're within guidelines. Just saying that alone — within guidelines — does tell me that there is something in that water coming from the tar sands."

In her response, Kelly said that they are tracking long-term trends related to hydrocarbons, and that dissolved metal concentrations are the indicators the department most concerns itself with, due to their direct impacts on bugs and fish. 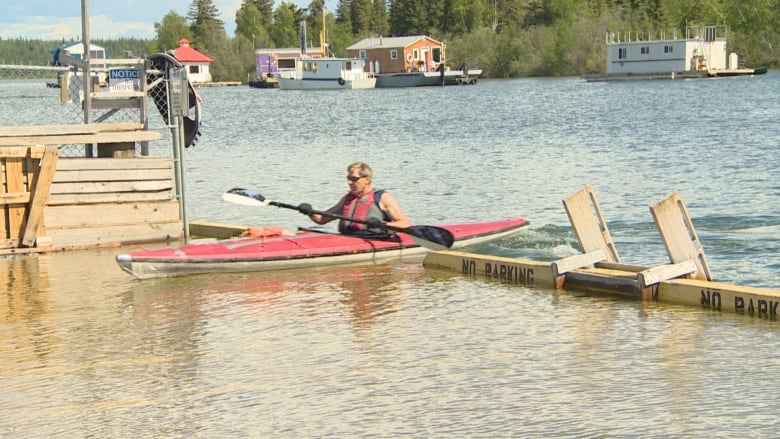 A kayaker paddles from Great Slave Lake directly onto the government dock in Yellowknife's Old Town neighbourhood in June. Water levels in Great Slave Lake reached historical highs in July 2020, and have remained there since, according to N.W.T. environment department officials. (CBC)

MONITORING RESTORED AT 12 of 18 SITES

Kelly also said water monitoring activities had resumed at 12 of 18 priority sites in Alberta. Monitoring at the sites was suspended in March due to the COVID-19 pandemic.

The suspension of monitoring activities — done without the territory's knowledge — led MLAs to question the effectiveness of the territory's transboundary water agreement with Alberta, which it has had since 2015.

"Water monitoring was suspended during the highest levels ever recorded, and the Alberta government didn't bother to inform us," Frame Lake MLA Kevin O'Reilly said. "What sort of lessons do we take away from this, and how do we improve the implementation of these agreements?"

"Unfortunately, we weren't informed. But as soon as we were informed, we reached out to both the provincial minister and federal minister to have these open and frank discussions ... we were on it right away," he said.

Kelly said that the incident has led to the government changing how it communicates with Alberta. The province put an assistant deputy minister on the bilateral management committee, and is meeting with N.W.T. representatives quarterly.

The environment department reported in its presentation that water levels in Great Slave Lake are the highest they've ever been, reaching record highs for every month beginning in July 2020. 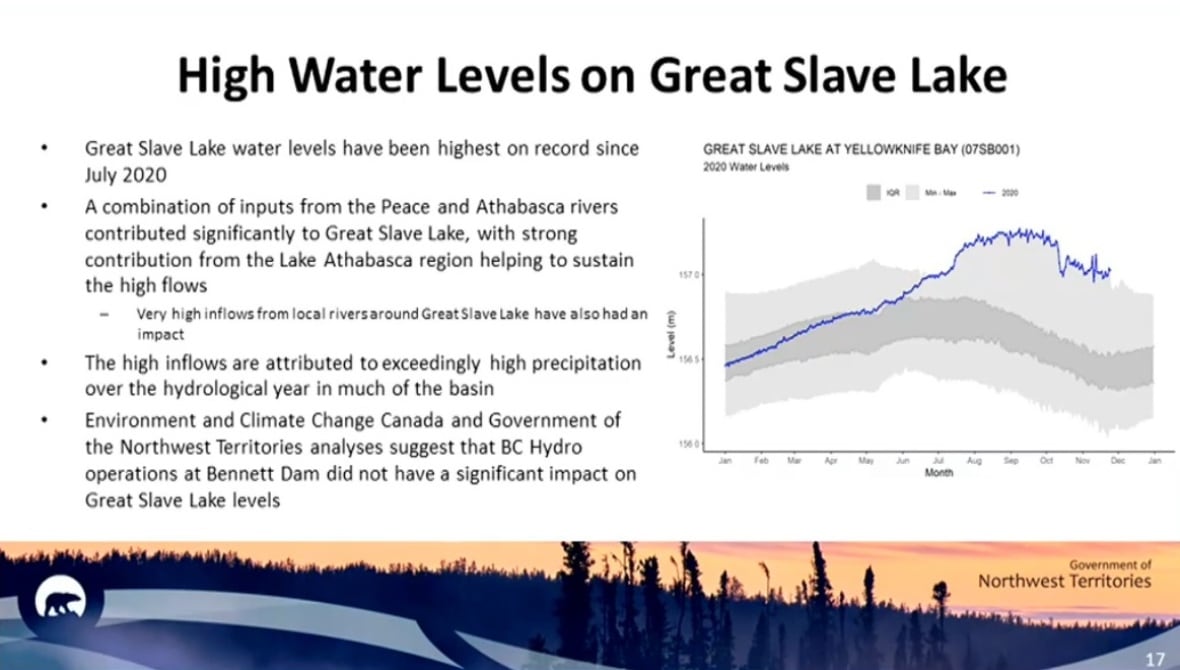 A slide from the presentation shows water levels in Great Slave Lake in 2020. Levels hit a historic high in July, and remained there for the following months. (N.W.T. Department of Environment and Natural Resources)

Though the government wasn't able to pinpoint the exact reason for the high levels, it attributed them to very high precipitation in watersheds that flow into the lake, starting in September 2019.

Kelly said the analysis suggested the flooding of B.C.'s Bennett Dam, which took place this summer, did not have a significant impact on the levels.

Territorial government officials are working with researchers from the federal, Alberta, and B.C. governments to further examine the factors contributing to the high levels, she said.

Kelly said that the government also took samples of a larger than normal plume in Great Slave Lake after hearing concerns from residents, and that results from that sampling are expected to be available in the next few weeks.

As for what's next, officials say they aren't sure at this point, and that rain and snowfall in northern B.C., Alberta, and Saskatchewan and the southern N.W.T. will be the biggest factors.

"It's not just an average high water year," said Kelly. "It's unprecedented. It's very hard to predict what happens next when we have no data on what's happened previously."