Friday, August 30th 2019, 4:53 pm - The draft report will shortly be studied next month, and is expected to draw dire conclusions

A leaked draft of an upcoming U.N. climate change report paints a catastrophic picture of the effects of the climate change-driven sea-level rise expected in the coming decades.

The draft, a 900-page "special report" on the prospects of Earth's oceans and polar regions, expects "a steady decline in fish stocks, hundred-fold or more increase in the damages caused by superstorms, and hundreds of millions of people displaced by rising seas" as a result of the changes expected as climate change continues, according to the AFP, which first reported on the leak.

The draft, which is set to be studied at a conference next month in Monaco, describes a full-court press of feedback loops if warming continues on its current path.

First, some 30 per cent of permafrost in the northern hemisphere is expected to melt, resulting in the emission of billions of tonnes of trapped greenhouse gases, which will increase global warming and make climate change even worse. Glaciers, already under strain, will also fare poorly, with melting accelerated.

And even if emissions are capped to a level that would keep future temperature rise to 2°C -- still more than the Paris Agreement's goal of 1.5°C -- the expected sea-level rise would lead to the displacement of around 280 million people from the lower-lying parts of Earth's coastlines.

"Even if the number is 100 or 50 million by 2100, that's still a major disruption and a lot of human misery," Ben Strauss, CEO and chief scientist of Climate Central, told the AFP. "When you consider the political instability that has been triggered by relatively small levels of migration today, I shudder to think of the future world when tens of millions of people are moving because the ocean is eating their land."

Canada, which includes millions of square kilometres of permafrost, is estimated to be warming twice as fast as the global average, according to a report released by the federal government earlier this year. Among the risks are not only sea-level rise, but also increased flooding in the populous Great Lakes Basin. 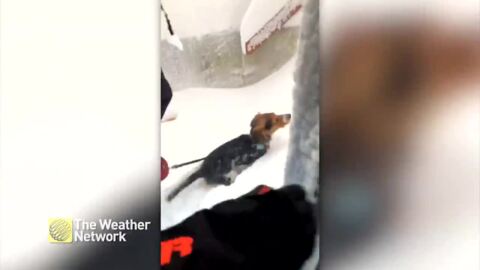