Editor's Choice
We have an unlikely leader in January's snowfall race

If shovelling the daunting amount of snow we've faced so far in Ottawa this winter hasn't been enough for you and your back, the city wants to remind you that you also need to keep any fire hydrants on your property clear.

"It actually does state in the bylaw that it is the responsibility of the property owner adjacent to the fire hydrant, to keep it clear of obstructions and to make it easy to access for fire or for maintenance," said Carol Hall, manager of water distribution with the city's public works and environmental services department.

'We try not to go to bylaw if we don't have to. We'd rather work with the resident.' - Carol Hall, City of Ottawa

Firefighters are equipped to remove snow and ice from around a hydrant when they arrive at a call, but they'd prefer to focus on other tasks, said Danielle Cardinal, the public information officer for Ottawa Fire Services (OFS).

"It's just that extra step that needs to be taken where that crew could be doing something else," Cardinal said. "It can be a pretty ferocious task when your number one tool is being blocked by ice and snow."

The reminder follows a garage fire Thursday morning on Mimosa Avenue, near the General campus of the Ottawa Hospital.

OFS photographer Scott Stilborn tweeted two photos showing how a path had to be cleared around the hydrant in order for firefighters to attach their hoses. In that case, Cardinal said a resident who called 911 jumped into action with their shovel to begin the work.

Hall and Cardinal acknowledge that not everyone is up to the job of clearing the required 1.5-metre radius around hydrants, so they're asking neighbours to help each other out.

"We would encourage people, if they see a hydrant that looks like it's been neglected, to adopt that hydrant and to get a group together to keep it clear," says Hall. 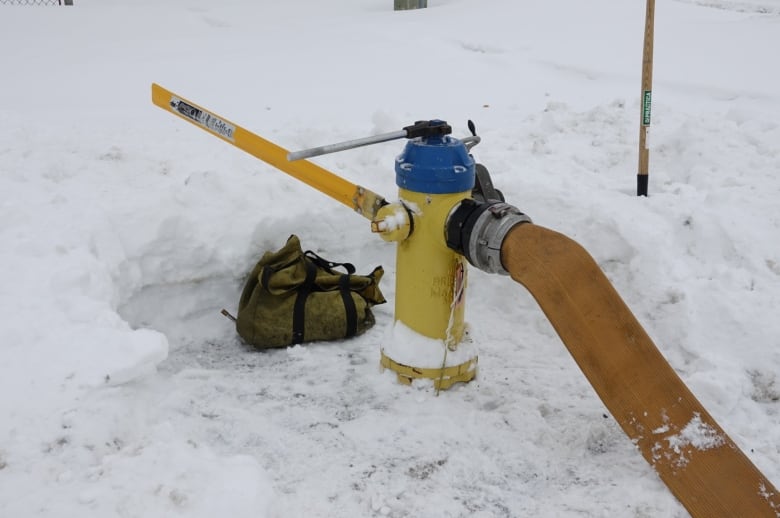 Residents are expected to clear a 1.5-metre radius around fire hydrants. (Giacomo Panico/CBC)

"As a community, take the time to meet your neighbour and ask, 'Do you need help with that hydrant?' That might be the first step in giving that hydrant a little more TLC," Cardinal said.

While the city can fine property owners who fail to properly clear the area around a hydrant, Hall said it's rare.

"We try not to go to bylaw if we don't have to. We'd rather work with the resident," she said. "If they are someone who is completely unable to clear the hydrant, for sure we'll be there helping, and hopefully the neighbours can be engaged as well."

On the other hand, if someone's caught piling snow onto hydrants, they city will be more apt to crack down and issue a fine.

Hall said anyone unable to clear a fire hydrant on their own can submit a service call to the city by calling 311 or submitting a report at ottawa.ca

This article was written for the CBC By Giacomo Panico

VIDEO: COUPLE TRIES TO SHOVEL DURING A SNOW STORM