Thursday, July 11th 2019, 4:47 pm - We often talk about healthy living and quality of life but have you considered the quality of the air you breathe? Most of us spend up to 90% of our time indoors, according to many surveys. Add up the time you spend at home, in the office and on transport, and you will see how close this figure is for yourself.

The study of indoor air quality did not achieve any public prominence until the 1970s. This was brought on by the “Oil Shock” that rapidly pushed energy prices to unprecedented highs. The response from building managers in the United States and elsewhere was to reduce the fresh air entering a building and recirculate as much as possible to retain heat in winter and keep out heat in summer.

These changes were made with minimal understanding of the effects on indoor air quality. Suddenly a new phenomenon emerged, “sick building syndrome”.

The first indicator was that high levels of carbon dioxide (the most common of the bio-effluents) emitted by the occupants invoked a physiological response that made the air feel “hot and stuffy”.

The second was a build-up of moisture, leading to condensation, particularly where that condensation occurred within wall cavities. This allowed mould to flourish unseen and undetected, until it made its presence felt by outbreaks of eye, nose, throat and skin irritations and eventually the smell from the emitted chemicals.

Editor's note from The Weather Network: A recent study (see the video above) suggests that buildings with ventilation systems, particularly air conditioning units, help disseminate contaminates into the air and contribute to sick building syndrome. 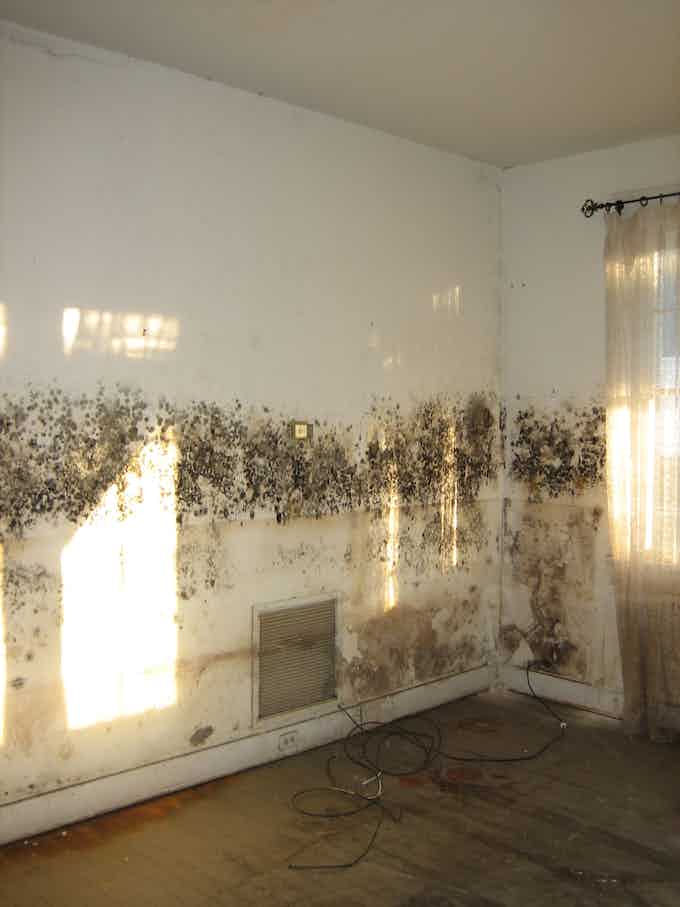 Mould can have harmful effects before it becomes this obvious. Wikimedia Commons, CC BY-SA

Unfortunately, the irritation and smell were generally attributed to chemical exposure and not to biological origins. This led to a four-decade-long obsession with volatile organic compounds (VOCs) and the emission of these chemicals into the indoor air. This was in part understandable because VOCs were also the main focus of environmental protection agencies at that time.

Apart from particularly aggressive chemicals like formaldehyde, emitted from resins in particle board and laminates, and the nitrogen dioxides from gas-fired cookers and heaters, most other VOCs have never been convincingly linked to health effects.

This is hardly surprising when you compare the occupational exposure limits for the same chemicals with their concentration in indoor air. The levels for safe workplace exposure are often 1,000 times higher. So why would we expect any effect in the home or office?

But headlines like “Is your carpet killing you?” are much sexier than “Please remember to open a window occasionally”.

In the mid-2000s attention switched to semi-volatile organic compounds (SVOCs) as a result of the endocrine disruptor debate. Previously no-one had considered them in indoor air quality because it couldn’t be envisaged how a compound with such a low volatility could be inhaled in any significant quantities.

It has now been shown that dust settling on materials containing SVOCs (vinyl flooring and the like) absorbs the chemicals then is resuspended in the air, for us to inhale or ingest. The Bornehag study linked phthlates (chemicals widely used in plastics) absorbed on particulate matter to asthma.

The most ubiquitous SVOCs are the phthlate plasticisers. Laboratory and environmental studies in animals have provided strong indications that endocrine disruption is taking place. Human evidence is lacking at this stage. But human studies of other effects have shown stronger evidence.

A study in Bulgaria by Scandinavian researchers showed increasing rates of childhood asthma correlated to rising use of phthlates in the home. Given that most homes did not contain vinyl flooring or seat covering this was at first confusing. But interviews with the households showed a big increase in use of a particular cleaning product that contained phthlate, presumably to rejuvenate vinyl surfaces.

VIDEO: DOES DRIVING WITH THE AIR CONDITIONING ON USE MORE GAS?

YOU CAN OPEN A WINDOW, BUT WHAT IF IT'S WORSE OUTSIDE?

Our traditional way to improve poor indoor air quality is to increase ventilation to purge the contaminants. This works well for volatile organic chemicals and bio-effluents like CO2 and odours, and also works well in suppressing the SVOC-laden dust.

But what do you do when the outside air quality is worse than the inside air? This had long been a problem in inner-city areas before the era of environmental legislation. Later, with the rise of the use of diesel engines for motor vehicles, a new category of pollution has emerged – ultra-fine particle (UFP) pollution. Other sources are bushfire smoke from activities such as land clearing in South East Asia and bushfire mitigation activities in southern Australia and grass pollens, which can result in “thunderstorm asthma”.

In these cases the pollution is coming indoors from outside, as opposed to the traditional indoor air quality problem of pollution being inside and trying to get it out.

While the technology exists to reduce ultra-fine particles coming indoors, it is expensive and not well known. We should be developing this technology as a required standard for buildings like hospitals, because this is where asthma suffers seek shelter and treatment during such events.

My mantra has always been that I can fix any indoor air quality problem with enough clean, fresh air. This is still true, but that clean air is getting harder to find.

This article is republished from The Conversation under a Creative Commons license. It was originally published in January 2018. Read the original article.