Sunday, January 10th 2021, 3:25 pm - Scientists say that there are specific stressors humans can control to protect whale populations, such as vessel traffic and marine noise pollution.

The bleak history of whaling pushed many species to the brink of extinction, even in the remote waters of the north and south poles. Over 1.3 million whales were killed in just 70 years around Antarctica alone. The scale of this industrial harvest completely decimated many populations of large whales in the Southern Ocean. But nearly 40 years after commercial whaling ended, we’re finally seeing signs that some of the most heavily-targeted species are recovering.

In a recent study, scientists reported that blue whales, once prized by whalers for their gargantuan size, are increasing in number in the waters surrounding the sub-Antarctic island of South Georgia, with 41 new individuals catalogued over the past nine years. South Georgia saw around 3,000 blue whales killed each year at the hunt’s peak in the early 20th century. The waters surrounding the island are rich in the krill these whales eat, and scientists believe their return heralds a “rediscovery” of this oceanic larder by new generations. 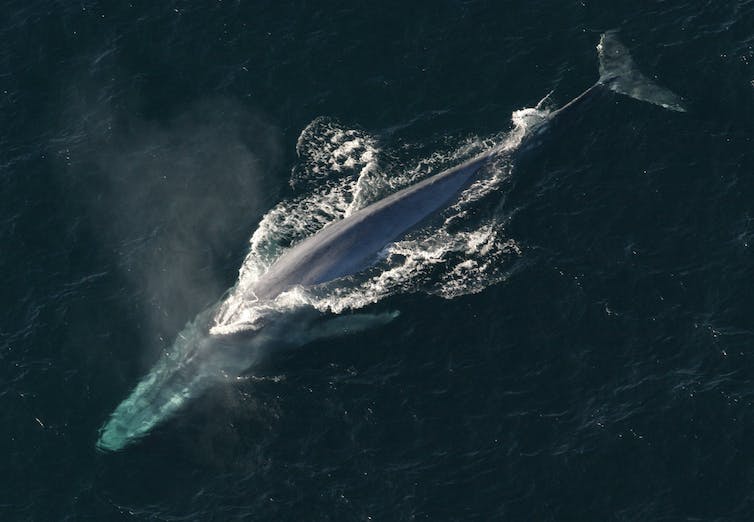 Blue whales are thought to be the largest animals to ever exist. Anim Flickr/NOAA Photo Library

Similar signs of recovery have been documented for humpback whales around the western Antarctic Peninsula. In the far north, western Arctic bowhead whales appear to be approaching numbers last seen in pre-whaling days, while fin and minke whales are now regularly seen in the Chukchi Sea near Alaska.

With the whaling industry gone, polar seas are among the best places for these ocean giants to re-establish their populations. Their habitats here are still relatively pristine and, for the moment, contain fairly stable food supplies. The Arctic still hosts subsistence harvests by indigenous communities, though these hunts are carefully managed.

The 1984 suspension of commercial whaling prevented the extinction of large whales in polar waters, but it cannot protect them from the new pressures which will emerge as global warming reshapes these regions. So what do these rapid changes mean for the still fragile recoveries of polar whale species?

Let’s not blow it

Over the next few decades, whales at the poles will face several new sources of stress, from warming waters disrupting their food supply to pollution and commercial fishing. With less sea ice and longer ice-free periods in the summer, easier access to the Arctic and Southern oceans and their resources is tempting many industries to expand or establish themselves in these remote waters. Vessel traffic, particularly in the Arctic, is increasing, and whales are among the most vulnerable to the increasing noise and the potentially lethal threat of collision. 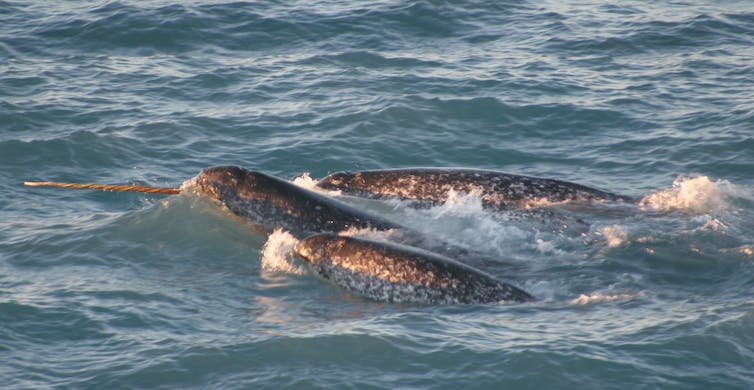 We’ve learned how to minimise the impacts of human activity on whales in busier waters outside of the Arctic and Antarctic. As part of an ongoing research project funded by the European Commission, myself and colleagues are trying to apply those lessons in the Arctic, to help protect whales from the growing presence of shipping.

We know that slowing vessels down reduces the likelihood of fatal collisions with whales, and it has the added benefit of reducing how much noise the ships produce. Much like the speed restrictions planners place in busy town centres to reduce the risk of cars hitting pedestrians, we can create slow-down areas for ships in locations we know are used by whales.

One source of stress that we can monitor and assess quite well is the prevalence of marine noise pollution, thanks to underwater recording devices called hydrophones. Large ships produce loud, low-frequency noise that can travel far underwater. Whales rely on sound to help them navigate their dark underwater habitats, but vessel noise can prevent them communicating and foraging effectively. It’s a bit like trying to talk to your friend in a crowded restaurant.

But for whales, this can be more than a simple annoyance, it can be deadly: one study found that ambient noise increased the risk of humpback mothers and calves being separated. Research is now underway in the Arctic to identify areas where increasing noise from ships may be affecting whales, and where action – such as moving shipping lanes further away – might help.

In many cases, fascination has replaced greed in our relationship with whales. We now understand them as useful indicators of ocean health, as well as highly intelligent beings with complex cultures which we have an obligation to protect.

Still, it has still taken more than 40 years to get where we are, and the fact that many whale populations – including belugas, bowheads and some humpbacks – are still struggling, suggests we still have a way to go. Not all the species commercial whalers once hunted appear to be recovering, even with long-term protection measures. Sperm whales in the southern hemisphere and western grey whales in the Russian Arctic are notable examples.

As scientists, we still have much to learn. But we know enough to understand that a far-sighted view of the needs and vulnerabilities of these beautiful creatures is necessary to preserve a future for them.