At least 13 people are stranded in Cape Breton's Victoria County after a storm pummelled the region this week with powerful winds and heavy rain.

In Tarbotvale, N.S., a large section of gravel road was washed away and its 30-metre steel truss bridge drifted down the river.

Barbara Longva, the local councillor for the area, said six people are unable to leave their properties on the Rear Barachois Road.

"It's a huge job to try to fix this," said Longva, who lives in nearby Englishtown.

"It's a bridge, plus there's probably a quarter-kilometre of road that's completely gone. It's a big section of road. That's not something they could fix overnight."

A community effort is underway to help those who are stranded.

In a text message, Tarbotvale resident Marcelle Lavoie said her son, Gordon Crimp, was able to get a line over the local river on Thursday morning to get supplies to stranded residents. 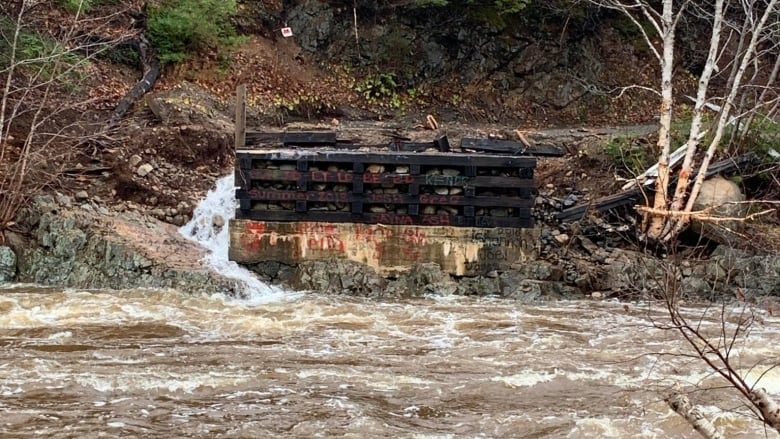 The bridge over the river in Tarbotvale washed away in the storm that swept across the province this week. (Guillotino Shuxley/CBC)

A rope has been fastened to trees on either side of the river, and a milk crate on a metal ring is being used to travel to either side.

Lavoie estimates the distance between the gap is about 25 to 30 metres.

Walkie-talkies are also being used to communicate as the sound of the rushing river makes it too difficult to yell across the stretch.

Being able to move supplies across the river is "a start," according to Lavoie who is without cell service, only text messaging. 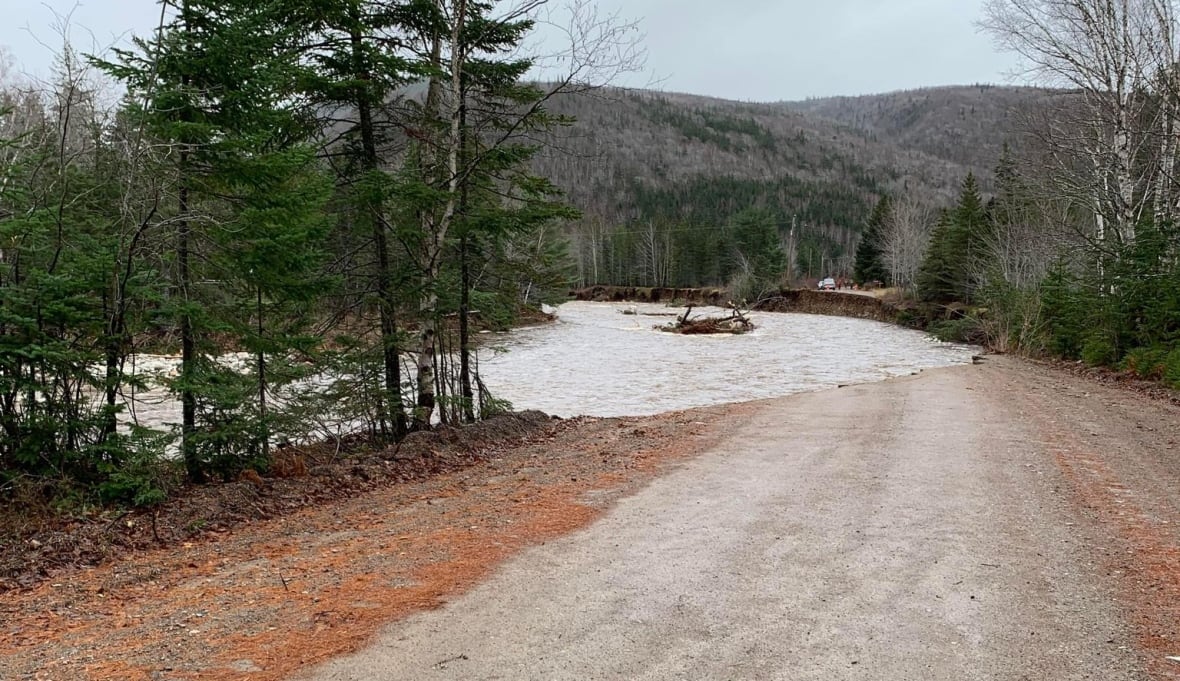 About a quarter of a kilometre of the road to Tarbotvale was destroyed. (Guillotino Shuxley/CBC)

DAYS OR WEEKS TO RE-CONNECT COMMUNITY

Lyle Donovan, the Emergency Management Office co-ordinator for Victoria County, said Thursday morning it could take days or weeks to establish a route to the community.

Rebecca Barron and her family live on Tarbotvale Road and watched as heavy rain all but destroyed the embankment at the end of their driveway.

Now the family's only option is to leave their home by driving a truck through a field and some trees in order to reach the nearby roadway.

Barron said her family has been checking on residents who are left stranded on the other side of the river.

"They're doing OK," she said. "They said they have food and everything that they need for now, so they're waiting to see what's going to happen, as far as when repairs are going to take place."

Longva said members of the Emergency Management Office are looking into rescuing the people who are unable to leave their homes. In addition to Tarbotvale, seven people are stranded on the Oregon Road near North River after their bridge washed out.

Longva said she hopes people will stay away from areas that were compromised by the recent storm.

"It's pretty devastating what nature's force can do," she said. "I grew up in Tarbot and that bridge has been there my whole life. To see it washed out, I really couldn't believe it."

This article was written by Erin Pottie and originally published by the CBC.