Image: Carol Ann Ryan snapped this photo of a silver fox staring down a vole on Signal Hill, which overlooks St. John's. 'I thought I'd just do a little walk around. And there he was. You never know what you're going to get.' (Carol Ann Ryan)

Carol Ann Ryan couldn't believe what she was seeing as she peered through the viewfinder of her camera on Saturday.

A silver fox had cornered a small vole at the top of Signal Hill, just a few feet from the end of her lens. The vole stood on its hind legs, almost as if it were pleading for mercy, before the unrelenting fox devoured its breakfast.

"That morning it was -13, plus wind chill, blowing winds. I thought I'd just do a little walk around. And there he was," she said. "You never know what you're going to get." 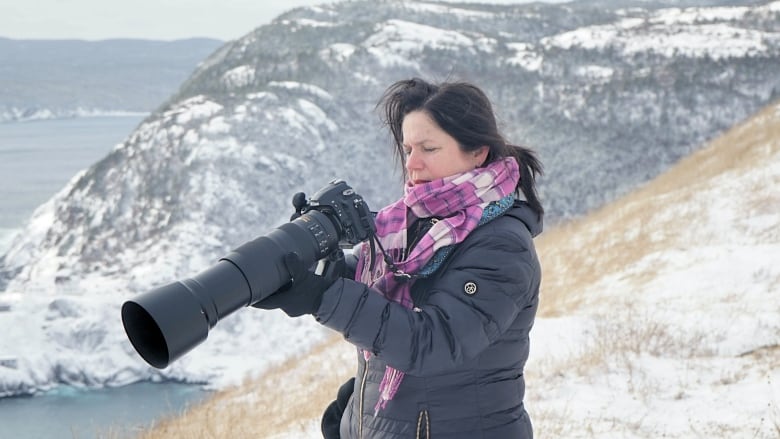 Ryan loves to spend her mornings at Signal Hill with her camera. (Ryan Cooke/CBC)

Ryan captured the entire sequence from beginning to end. She was shooting rapidly for about a minute, trying to keep the fox in focus the entire time. She captured the way it stalked the vole, another picture showed the vole in the air as the fox's mouth gaped open. The next shot showed the fox with the vole dangling from its mouth.

"I do have him at the end of it where he has the vole remnants on his lips," she laughed.

Photography has been a lifelong passion for Ryan. After recently retiring from her job as a nurse, she began spending more time out with her camera.

Like many photographers, she likes to be on Signal Hill as early as possible to capture the wildlife and the picturesque sunrises. Her favourite subjects are the foxes at the national historic site, but until Saturday they hadn't been seen in three weeks.

While they are social animals, their hunting can be hard to capture, she said, since they sometimes flee with their prey.

"They were so close in the open," she said. "A lot of times they're down over the hill and you can't capture the whole event that goes on."

Ryan said the foxes often go up to people, presumably looking for food. She's heard stories of them chewing on gloves and boots, but never hurting anyone.

Efforts were made by Parks Canada in 2014 to trap the foxes and relocate them, to avoid people feeding them. It's unclear how many still live in the area.

While the fox Ryan photographed seemed to have no trouble hunting, she urges people not to disturb their way of life.

"Do not feed them," she said. "I've seen people feed them and that hurts them."

VIDEO: WHAT DOES THE FOX SAY?