Some animals will eat anything, including snow.

Case in point: Check out this monkey, caught on camera at the Milwaukee County Zoo in 2019 (see video above).

The clever Japanese macaque, which is native to snowy environments, can be seen rolling the snow into a ball and eating it.

It seems harmless, right? That depends.

Experts say snow isn't safe for humans -- or monkeys -- to eat, with some exceptions.

That's because it can contain harmful chemicals like antifreeze or salt. Snow is mostly made up of water, but Jeff S. Gaffney, a professor of chemistry at the University of Arkansas, told NPR in 2016 that it can also contain sulfates, nitrates, formaldehyde, or mercury, depending on the environment.

As it descends to the ground snow acts like a net that absorbs pollutants. If it falls within range of a busy roadway or factory, for example, it will likely contain traces of black carbon or soot.

Pesticides have also been detected, and wind can whip up dust and soil in a storm, carrying it long distances.

Snow that's recently started to fall is likely to have a higher concentration of pollutants, according to water and climate change researcher John Pomery.

Flurries collected in the midst of a storm are likely to be "cleaner," because previous flakes have helped clear the air.

Once it hits the ground, snow can easily conceal small objects like nails or plastic trash that could be harmful if swallowed.

That said, there are some exceptions that make it safe for consumption. According to UCSB ScienceLine, pure, fresh, snow that's fallen on an untouched area like a mountain top is fine to eat.

Snow that has been sitting around for some time is a different story. The longer it's exposed to the environment, the more time it has to absorb dirt, bacteria, and allergens.

Given the monkey in the video above was in an enclosed space and the snow looks freshly-fallen, it was likely safe.

In most cases, the contaminants present in a random sampling of snow will be below toxic levels -- but the next time you take your pet out in a public winter wonderland, you still may want to think twice about letting them indulge in a snowy snack. 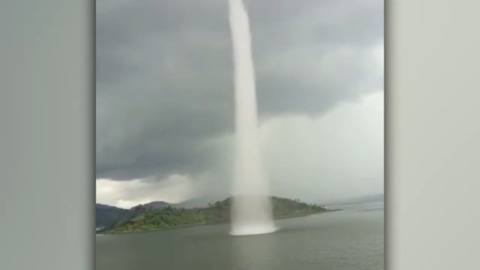