This part of a mosasaur fossil found near Lethbridge, Alta., is protected in a burlap and plaster 'field jacket.' The mosasaur was an 'apex predator' that anything it could get its teeth into. (Royal Tyrrell Museum of Palaeontology)

Picture a Komodo dragon seven metres long surging through the ocean to gobble up fish, turtles — pretty much everything in sight. That pretty much sums up the mosasaur, whose 70-million-year-old fossil was stumbled across by ammolite miners near Lethbridge, Alta.

It was the mosasaur, which dominated the seas 70 million years ago, when most of the planet was ocean, said Royal Tyrrell Museum of Palaeontology's director of resource management Dan Spivak, on the Calgary Eyeopener Monday.

The mosasaur wasn't actually a dinosaur — it was more of a sea monster — and it lived in Bearspaw Sea.

"It's still pretty much encased in rock, but based on what we've seen from other similar type of animals this is a large marine reptile," Spivak said. "It kind of looks a little bit like a swimming Komodo dragon, maybe with a bit pointier nose."

Spivak said the Royal Tyrrell people handling it guessed that it was between 6½ and seven metres long.

"The skull itself is about a metre long with sharp pointy teeth and a real mean look on its face," he said.

There is no living comparable species on the planet, Spivak added.

"This is a completely extinct group of animals that doesn't have any living analogs, I guess you could say," Spivak said. 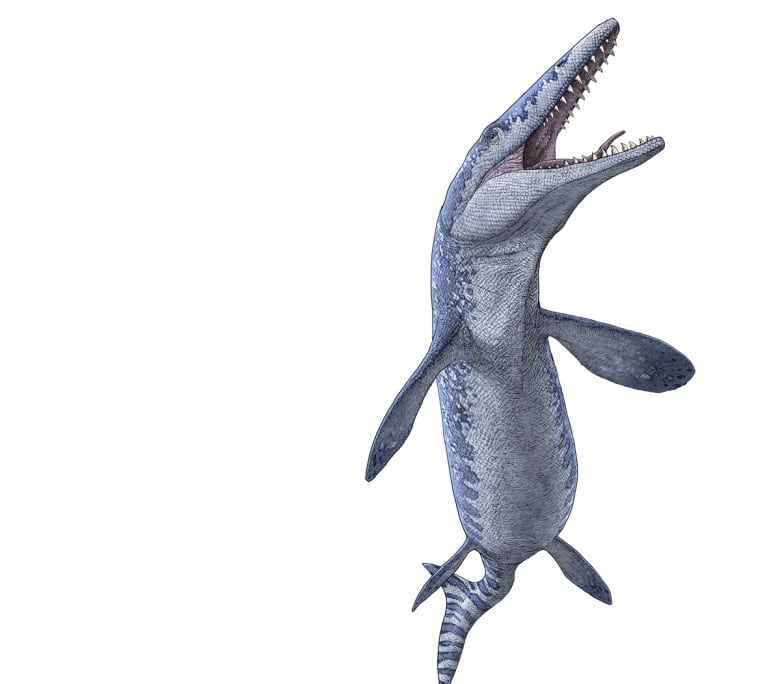 This illustration shows a Tylosaurus, which is a kind of mosasaur. The Royal Tyrrell Museum staff handling the mosasur fossil find guessed that it was between 6and seven metres long. (Art by Julius T. Csotonyi, courtesy Royal Tyrrel Museum of Palaeontology, Drumheller, Alta.)

While there are no living creatures comparable to the mosasaur, there's a cinematic one: the mosasaur did make an appearance in Jurassic World in 2015.

"That was a really really big one," Spivak said. "Those movies tend to put their animals on steroids. So yes it was mosasaur, but it was significantly bigger than a mosasaur would have been in real life."

While Jurassic World might have blown the mosasaur up to the Hollywood sized proportions, there is little doubt that they were nasty pieces of work — a Discovery channel documentary about the mosasaur describes them as the "T-Rex of the Deep."

"They were apex predators," Spivak said.

"These things would be swimming around in what would have been a shallow sea that covered a large part of Alberta 70, 72 million years ago, feeding on turtles and ammonoid and fish — and pretty much anything else that they could have got their teeth into."

The discovery came as miners used track hoes and heavy equipment to excavate for ammolite, the shell of an ancient cephalopod or squid-like animal that, when fossilized, changes structure, creating a rainbow look to it.

Those rainbow shells are being incorporated into jewlery and other things.

The discovery came about recently, when the miners were using track hoes to go through the mine's rocks, inch by inch, when one of the miners spotted the mosasaur fossil embedded into a rock.

"These guys are experts on spotting things in this rock and immediately stopped what they were doing," Spivak said.

That's when Spivak got the call at the museum.

"That's one of the wonderful things about my job is I get these phone calls when people find stuff like this," he said.

"They shut down what they were doing in that area, [and] moved to another part of the mine," Spivak added.

"That was a Wednesday night I got the phone call," he added.

"Friday, we had a team down on site to assess what was there and then the following Monday we had a full team of I believe four people going down with all the appropriate equipment to excavate this thing in the sand for about four days, five days.

"They had it excavated in a field jacket," he said. "And by Friday it was on the back of a truck and at the back door of the museum, waiting to be unloaded."

This article was written for the CBC by Stephen Hunt.

WATCH BELOW: A 14-MILLION-YEAR-OLD WHALE FOSSIL