Wednesday, June 16th 2021, 9:46 am - Saving just one turtle could greatly support the survival of this species

“Help! I’m fishing and just caught a huge sea turtle. She’s completely swallowed my hook.” We are two veterinarians, Debra Moore, who specializes in sea turtles, and John Thomason, who specializes in internal medicine. This is a call we get a lot in our work with the Sea Turtle Stranding and Salvage Network.

Thirty minutes after we received this call, the Sea Turtle Stranding team arrived at the Moses Pier in Gulfport, Mississippi, to find a frantic fisherman standing next to a 65-pound female Kemp’s ridley sea turtle. She was lying on the pier with fishing line coming out of her mouth. After examining the turtle for injuries, the team drove her to the veterinary hospital to see if we could save this turtle’s life.

But why was this one sea turtle so important?

The Kemp’s ridley sea turtle has been on the brink of extinction for the past 40 years. Saving this one turtle, which our team named Toni, could greatly support the survival of this species. 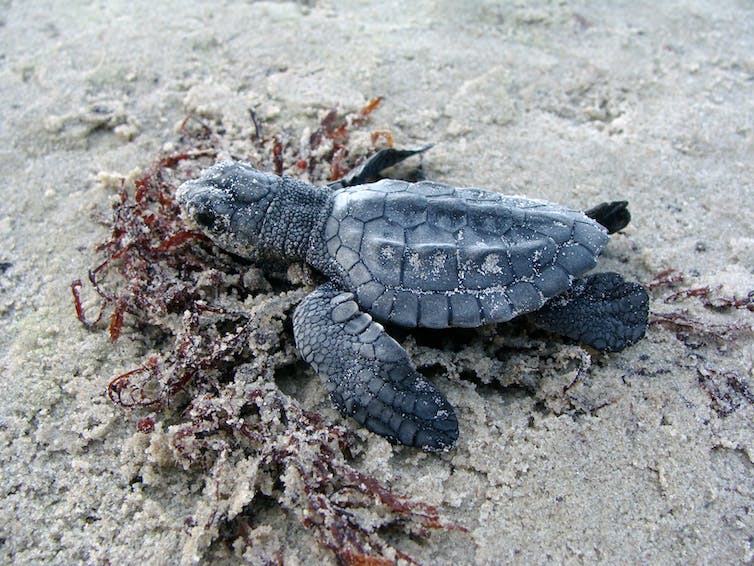 Only 1% of Kemp’s ridley hatchlings make it to adulthood. Nightryder84/WikimediaCommons, CC BY-SA

RELATED: Turtles are out more than ever this time of year. How you can protect them

Kemp’s ridleys can weigh as much as 100 pounds as adults – though they are still the smallest species of sea turtle – and can live for decades. It takes about 15 years for turtles to mature to the point that they can lay eggs, and a mature female can lay two to three clutches of about 100 eggs each nesting season. But less than 1% of hatchlings survive to adulthood, so every adult turtle is important to the overall population – especially a breeding female.

Kemp’s ridley turtles live primarily in coastal environments in the Gulf of Mexico. Over the past century, these gentle creatures have faced increases in pollution, oil spills and accidental catch risk from commercial fishing, as well as coastal development and crowded beaches in their nesting areas. And as Toni’s situation exemplifies, recreational fishing also poses a major threat.

It’s hard to count how many individual Kemp’s ridley sea turtles live in the Gulf of Mexico and Atlantic Ocean, so biologists count nests to track the health of the population. In the early 1940s, biologists estimated there were 40,000 nests in the Gulf of Mexico. By the mid-1980s, that number had fallen to fewer than 750. Through intensive conservation efforts, nests increased to 19,000 by 2009, but the number has dropped back down to 11,000 nests in 2014, the last year biologists published a nesting survey. 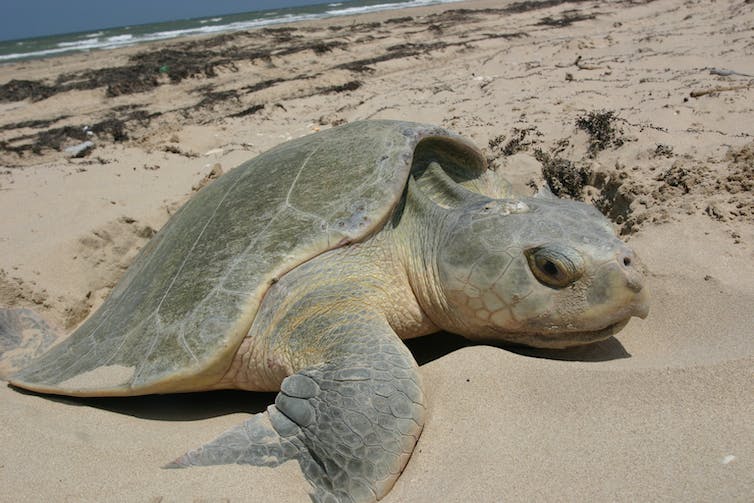 In an effort to save these turtles, the National Oceanic and Atmospheric Administration established the Sea Turtle Stranding and Salvage Network in 1980. We are part of this team of veterinarians, biologists and researchers who work with the public to locate stranded turtles, give them the medical care they need and rehabilitate them for release back into the wild. The public plays a crucial role. If someone who sees an injured animal contacts our rescue team, there is a good chance we can save these turtles.

WATCH BELOW: ROADS ARE A SERIOUS DANGER TO CANADA'S FRESHWATER TURTLES, HERE'S WHAT TO DO

[You’re smart and curious about the world. So are The Conversation’s authors and editors. You can read us daily by subscribing to our newsletter.]

Luckily, the fisherman in Gulfport, Mississippi, knew exactly what to do. As soon as he accidentally caught the large Kemp’s ridley, he contacted the Institute for Marine Mammal Studies (IMMS) stranding hotline. IMMS collaborates with the Mississippi State University College of Veterinary Medicine, where we work to provide top-notch medical care and rehabilitation to many marine mammals, including Kemp’s ridleys. 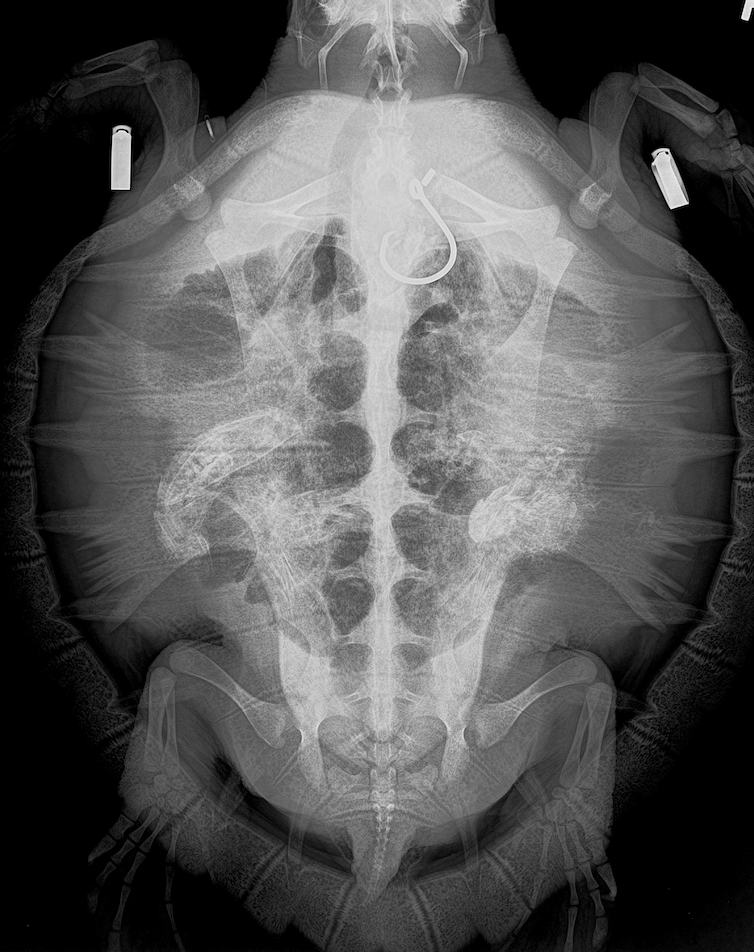 The fishhook, seen near the top of this X-ray, was lodged in the turtle’s stomach. Debra Moore/Institute of Marine Mammal Science, CC BY-ND

That summer afternoon, the sea turtle stranding team transported Toni to the veterinary hospital nearby at IMMS. Once at the hospital, Debra and the veterinary team took an X–ray and found that the hook was lodged deep in the turtle’s stomach. Getting it out would not be easy. Debra then called John to come to Gulfport to try to remove the hook with an endoscope.

We passed an endoscope – a long, thin tube with a camera and a light on the end – into the turtle’s esophagus and stomach. The esophagus connects the mouth to the stomach, and in most animals it is a smooth tube. But not in sea turtles. Sea turtles have hundreds of fingerlike projections called papillae that stick out in the esophagus to trap shrimp, crabs and other food in the stomach. Using the endoscope, we could see that the point of the hook was deeply embedded in the stomach, but the other half, which contained the eye of the fishing hook, was hidden behind some papillae. We needed to be careful to avoid tearing the stomach.

This video shows the esophagus of a different turtle that the team rescued after it swallowed a fishing hook.

Once we got a good view of the hook, the team passed a small lasso through the scope. We needed to slide the lasso over the eye of the hook, then tighten it as close as possible to the point embedded in the turtle’s stomach – a challenging task, since the hook was lodged flat against the stomach wall and hidden by the papillae. But after four hours, our team was finally able to free the hook and pulled it out through the turtle’s mouth.

It took almost four months, but after a complete recovery, Toni was ready to go home. Once Toni was healthy, we outfitted her with some tracking technology and released her. The hope is that she can help teach conservationists more about her species. You can track Toni and see where she is swimming by visiting the IMMS website.

Rescuing this turtle, removing the hook and eventually releasing her back into the wild was an incredibly rewarding process. Everyone on the team knew that because of our efforts, Toni could go on to lay eggs and help support her species. But biologists, veterinarians and the Kemp’s ridley turtles can’t do this alone. We need the public’s help to alert our rescue team if they come across a stranded animal and – more importantly – to take steps to limit the risks these turtles face so that we wont need to rescue Toni again.