Image: Researchers have found the samurai wasp for the first time in Canada, at a site in Chilliwack. The tiny wasps are parasitic, using an invasive stink bug's eggs as its host. (Elijah Talamas)

Its name sounds dangerous — the samurai wasp — but the tiny invasive parasite's appearance in Canada for the first time may not actually be a bad thing.

The wasp lays its eggs inside the eggs of another invasive insect, the brown marmorated stink bug, killing the embryo.

For its part, the stink bug's arrival in Canada in recent years is definitely a bad thing — it dines on tree fruits, hazelnuts and berries, and can have devastating effects for farmers.

The discovery of the samurai wasp, Trissolcus japonicus, in Chilliwack, B.C., was made by a group of researchers who published their findings in the recent issue of the Journal of Hymenoptera Research.

Paul Abram is one the the paper's co-authors and a research scientist with Agriculture and Agri-Food Canada.

"We know that this wasp is showing up in a lot of areas, where not long after the [stink] bug shows up, its enemy also tends to show up," said Abram.

Abram describes the wasp as black, about the size of a sesame seed, with an exoskeleton and a little point where a wasp's stinger would be — but instead of a stinger, it uses the point to lay eggs.

Both the wasp and the stink bug originate in Asia, but they've been making their way around the globe in tandem. Abram said the stink bug first appeared in B.C. in 2015. 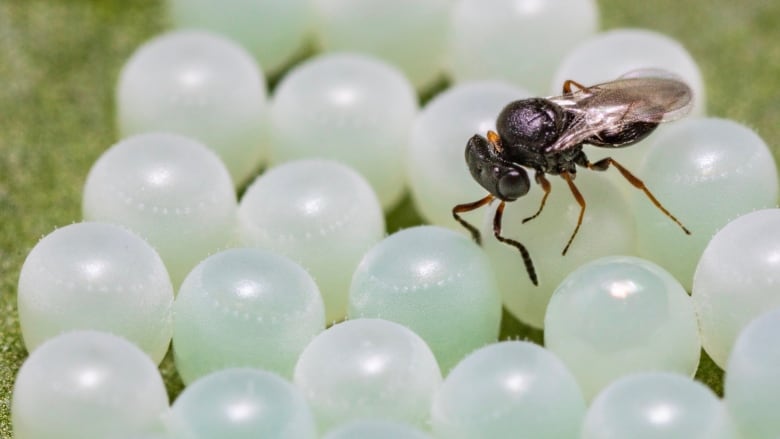 Image: The samurai wasp, Trissolcus japonicus, lays its egg inside the egg of a brown marmorated stink bug. The wasp's offspring will develop inside the stink bug eggs, resulting in the death of the stink bug. (Warren Wong)

There had been talk of deliberately introducing the samurai wasp to try to keep the bug in check, but that would have required a very thorough and long regulatory process.

"Obviously, the kind of natural enemies that are favoured for these introductions are ones that are likely to be very effective and also very specific, that they won't cause unintended consequences," said Abrams, adding that the regulatory process can take decades — not that the wasp cares.

RELATED: The world's biggest bee has been discovered

"They don't know about borders, they don't care about red tape," he said. "Instead of evaluating their safety, what we end up doing is looking at what their impact is."

Abram said the wasp is known to use other stink bugs as its host, and in Canada there are many native species of the bug — some are also pests like the brown marmorated type, but some are harmless, and some actually help farmers by eating different pest species.

Abram said the next step is to figure out where else the wasps are showing up, and what their impact is on the local eco-systems.

This article was written by the CBC by Rafferty Baker.

WATCH BELOW: A WASP FROM HARRY POTTER