The unsettled weather will continue across the Prairies through Friday as widespread rain tracks across the region. Some eastern regions are seeing the risk for non-severe thunderstorms to close out the week while high elevation areas in the west could see snow as cold air tracks for from the north. This coincides with the dominant cooling pattern that will leave parts of the region struggling for any late summer heat. More on the biggest storm risk areas and a look at what's complicating the weather pattern into next week, below.

WATCH BELOW: TEMPERATURE TREND THROUGH SATURDAY

Below-seasonal temperatures have dominated through the first half of August across the Prairies and the cooler than usual temperatures are set to continue through Friday and into the weekend.

"Cooler temperatures take over Alberta on Friday with daytime highs dropping to the mid-teens for Edmonton and Calgary as an upper level low swings down from the north," says Weather Network Meteorologist Kelly Sonnenburg.

A cold front will also bring the risk for non-severe thunderstorms through Friday afternoon and evening for the eastern Prairies. By Saturday, a surface low will also accompany the upper level low, which will bring widespread heavy rain across northern Alberta and Saskatchewan. Temperatures will remain chilly across the northern Prairies through the weekend, as we watch the threat for some late summer snow in the Rockies Friday night and into early Saturday.

This cool and unsettled pattern will dominate the next two weeks across the Prairies as well, although computer models continue to flip flop on the details.

"That's as the models struggle with handling the impacts on the patterns from the two super typhoons that formed in the western Pacific last week," says meteorologist Dr. Doug Gillham. "However, it appears that original ideas are back on track with cooler weather dominating across the Prairies, but with a fight for warmth at times across the south."

According to Gillham, most areas will see a brief warm-up midweek, before the cooler weather arrives as the next system tracks across the region late next week.

WATCH BELOW: EPIC 25-PERSON TRICK SHOT IS EXACTLY WHAT SUMMER IS ALL ABOUT 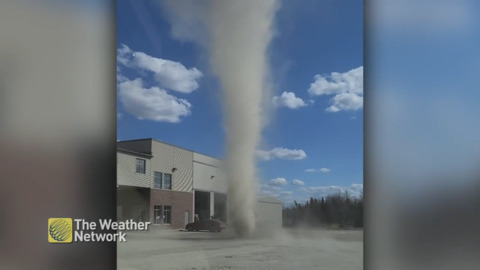