Some once-booming towns now sit completely abandoned, due to business closures, infrastructure breakdowns or a depletion of natural resources.

Many of them are being reclaimed by nature, but glimpses of what life was once like in those places remain.

Here are five ghost towns that can be found in Canada.

All photos courtesy of Wikipedia.

Bralorne was established in the Bridge River district during the Fraser Valley gold rush of the late 1850s.

A man named Arthur Noel bought access to the area and set up a mill in what became the Bralorne Mine. He worked in the area sporadically, until the area became tied up in legalities and stood unused for 12 years.

Pioneer Gold Mines took over in 1914 with industrial equipment.

A profitable vein was discovered in the area and, over the course of a seven-year period, mines in Bridge River produced $370,000,000 in gold.

There isn't much left of Flowerdale, Alberta -- a settlement 24 kilometres southwest of Youngstown.

The community was established in 1910 in the Sunnynook district.

Locating drinkable water was a challenge. Local wells produced bitter water, forcing residents to haul it in in from roughly 10 kilometres away.

Many families left the area during droughts in the 1930s.

The broken walls of a pioneer home in the photograph above are all that remains. 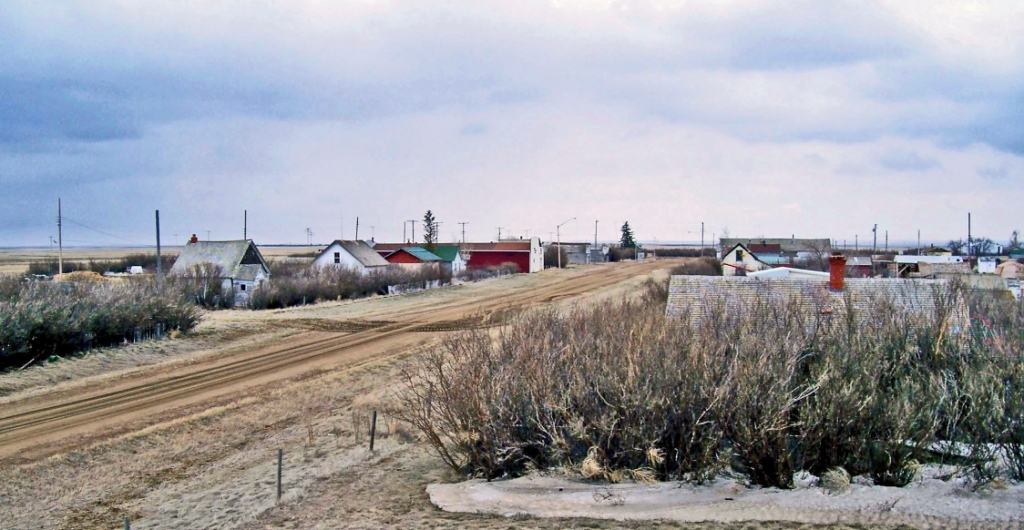 Robsart isn't completely deserted -- according to the Census, the southern Sastkatchewan community, located 69 km south of Maple Creek, had a population of 16 in 2006.

It was dissovled into an unincorporated community in 2002, meaning it is no longer overseen by its own local government.

The community was established in 1910 with the Canadian Pacific Railway (CPR) purchased land and named it Robsart. Three years later a man named Henry Abbott purchased it and settlements soon followed.

At its peak, more than 30 businesses existed in Robsart as well as a hospital. It remains to this day, although it closed in the 1930s.

The CPR built a railway going through the town, which spurred the construction of hotels, churches, schools, banks and grain elevators.

The town's decline was brought about by the Great Depression of the 1930s, combined with fires that wiped out a grain elevator and many businesses.

A vein of pure silver was discovered in this area of land in the Sibley Peninsula in northwestern Ontario in 1868. The Montreal Mining Company, siezed the opportunity and constructed a small mining town.

Ten years later, a second vein was discovered. Most of the silver had been extracted by 1883 and that, combined with falling silver prices, are what spurred its demise.

More than $3 million worth of silver was mined from the area during the community's 16-year run.

The houses that were constructed for the miners are now private cottages.

Located in Quebec's Saguenay-Lac-Saint-Jean region, Val-Jabert was founded in 1901 and centred around the pulp and paper mill that was established to meet a growing demand for newsprint.

It was located near two waterfalls on the Ouiatchouan river, making it a prime spot for paper production.

The Ouiatchouan mill was bought by American investors in 1904, following the death of Damase Jalbert, the town's founder.

Electricity, sewers and telephone service was available to residents of the remote community -- all state-of-the art technologies at the time.

Around 1919, the Spanish Flu hit, contributing to a decline in the town's small population.

Around that time Quebec Pulp and Paper Mills, who had taken control of the plant, ceased all milling activities due to a decrease in demand. Unemployed workers remained in the area until 1929, when the company ordered the homes be boarded up.

Today, Val-Jabert is open to the public as a tourist attraction.

VIDEO: STEP INSIDE AN ABANDONED VILLAGE IN CHINA