A resident of a northern Alberta community is coming to terms with the fact that he and his family are now homeless.

Officials from Paddle Prairie Métis Settlement said 15 homes on the northern edge of the community were destroyed by wildfire this week. The destruction was caused by the out-of-control Chuckegg Creek fire, which has grown to roughly 280,000 hectares.

George Wanuch, 52, lived about three kilometres north of the settlement. He watched helplessly as flames consumed two of his properties on Wednesday night.

"The clouds were purple, red, white, black," Wanuch said. "Every once in a while you would see a big plume of white — that had to have been a house catching fire."

Residents were forced to flee, but Wanuch stayed behind to work for the volunteer fire department.

"The winds were just so vicious," he said. "Nobody could control that fire."

The blaze gained momentum when it took over a park full of jack pine trees, he said.

"It's just like a volcano erupted," he said. "A big white plume of smoke just filled the sky a mile high, miles wide." Wanuch said he spent much of the day releasing penned-up animals before finding himself parked outside of his church. From there, he could see a red glow emanating from the area where he lived with his wife and two daughters.

"I pulled out my guitar and I sang some gospel songs," he said.

"I just had to pray and give God glory at that time. I just felt that was my house burning."

A mandatory evacuation order is still in place for Paddle Prairie, which is 70 kilometres south of High Level. Wanuch and his wife fled to Grande Prairie on Thursday, while others evacuated to Peace River and Fort Vermilion.

"A lot of people, they don't know what's happening with their homes. It's everybody just on pins and needles," he said.

Wanuch said he and his wife aren't sure what to do next. For now, he's going back to Paddle Prairie to help fight the fire.

"God's going to lead the way, just opening up pathways, I guess," he said. "It's a new door, new beginning."

WATCH BELOW: SUMMER FORECAST: DROUGHT, HEAT, AND WILDFIRES TOP OF MIND FOR THE PRAIRIES 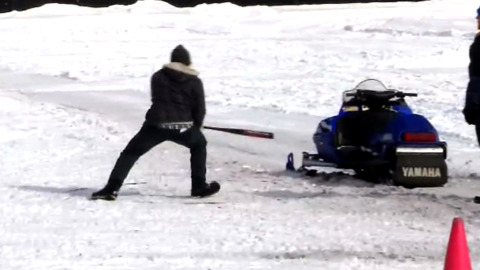