Editor's Choice
Car rust is as bad as you think, but here's what you can do
Isabella O'Malley, M.Env.Sc Reporter

TAE Technologies is a nuclear fusion startup that was founded in California in 1998. The company is now a team of 400 people and recently raised $1.2 billion USD with hefty contributions from influential companies such as Google, Chevron, and Reimagined Ventures.

As the funding pours in, the company states they are “on the cusp of delivering this transformational energy source capable of sustaining the planet for thousands of years.” “If you're thinking of nature's preferred way of making power, it's fusion,” Michl Binderbauer, co-founder and CEO of TAE Technologies, said to The Weather Network. The cost-effectiveness and safety of the technology are what make Binderbauer confident in calling nuclear fusion “a forever solution for clean, carbon-free energy.”

But, what exactly is nuclear fusion?

Nuclear fusion is what keeps the Sun and all other stars shining in the sky. The Sun is a glowing ball of mainly hydrogen and plasma, which creates energy when the hydrogen atoms crash into each other and release energetic light and helium as a byproduct.

To replicate this process down here on Earth, TAE Technologies heats a hydrogen-boron fuel until it turns into a plasma state on each end of the company’s fusion reactor machine. The particles are positively charged and naturally want to repel each other, so exceptionally high temperatures and powerful magnets are used to slam the plasma together and hold them in place so the fusion process can begin. A network of pipes carries fluid through the machine so it can pick up heat from the energetic light that is released by the plasma. The fluid arrives at a steam generator, which results in steam forming and spinning a turbine to generate electricity.

Unlike traditional energy sources that release methane and carbon dioxide, the only byproduct of this nuclear fusion process is helium which is captured and can be used in other industrial applications. 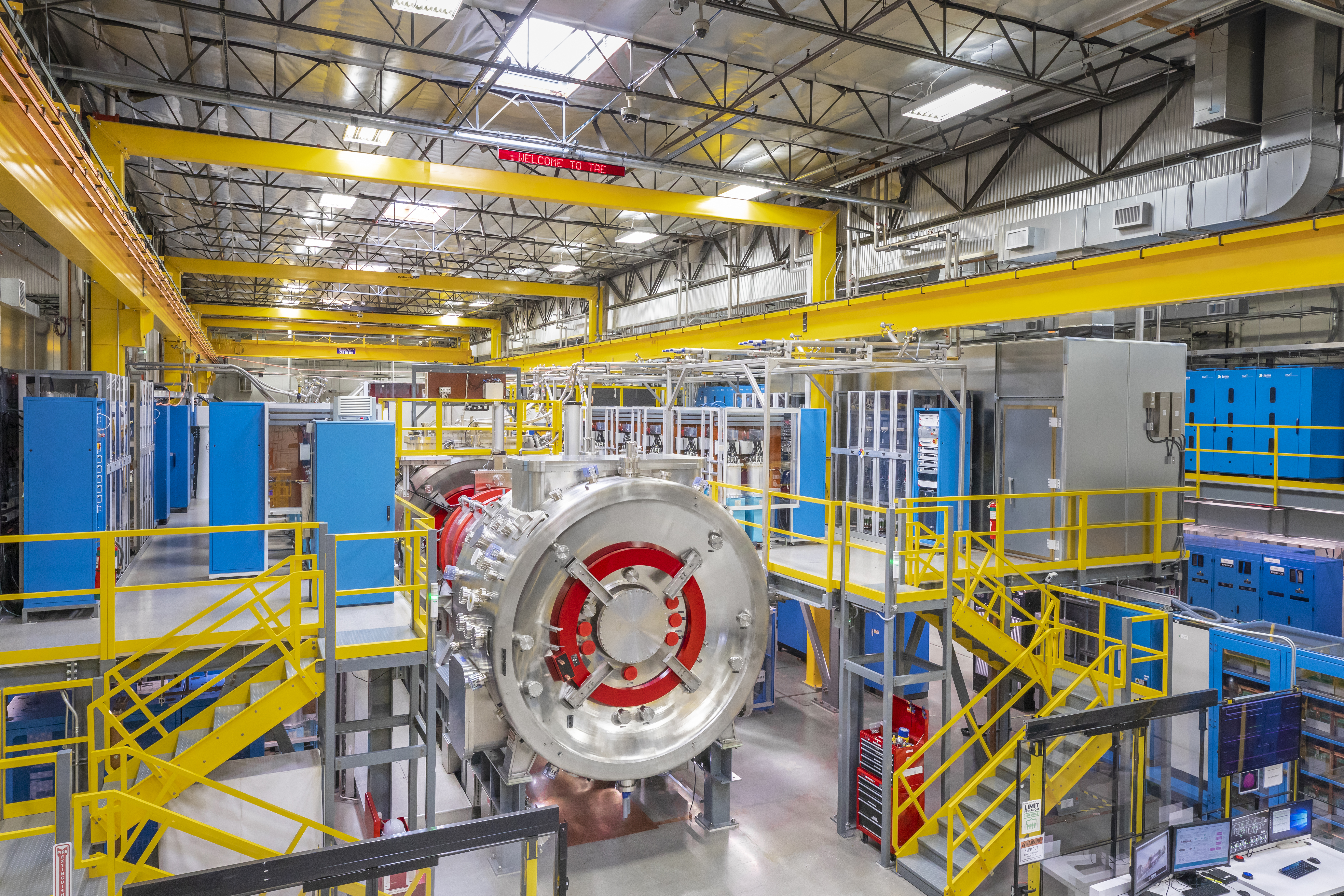 Norman and a full view of the facility located in Foothill Ranch, California. (TAE Technologies)

Nuclear fusion differs from what most of us think when we hear about nuclear energy, which is a fission process where an atom’s nucleus is split apart to release energy.

Both fission and fusion occur at the nuclear level, but one key difference is the split atoms result in radioactive products that are dangerous to human health and the environment. Zero radioactive waste is produced during the fusion process.

“Hydrogen-boron fusion has zero radioactive components to it. Other than ‘nuclear’ in the taxonomy, it's a completely different set of characteristics,” explained Binderbauer.

The Earth has a different gravitational force than the Sun, which is why extreme temperatures are needed to support the nuclear fusion process. The high-temperature requirement is often cited as the main hindrance to the emergence of this clean energy, but TAE Technologies states that exponential progress has been made in the fusion field due to developments in several areas including artificial intelligence, machine learning, vacuum technology, and knowledge about plasma behaviour.

Binderbauer stated that the company’s goal is to reach one billion degrees later this decade or in the early 2030’s, at which point significantly higher levels of energy would be created by the reactor compared to the energy needed to power it. The path to achieving new temperature highs has been lengthy and challenging, but Binderbauer states that the potential of this technology is what makes it so promising.

Current estimates from TAE Technologies suggest that nuclear fusion could become a regular component of a U.S. utility generation portfolio in the 2040s with the deployed capacity of electricity being doubled compared to present-day levels.

“Energy is this great equalizer. When you have it in a way where it no longer depends on one locality that has most of the hydrocarbons, but it's everywhere, ubiquitous distributed, and you're freeing also resource wars and the kinds of constraints we have today,” said Binderbauer.

“So it's a wonderful future. And what stands between us is a few more years of mostly science and engineering to get to the final proof points, and then all working together concertedly to deploy as fast as we can.”

Thumbnail image: This image from June 20, 2013, at 11:15 p.m. EDT shows the bright light of a solar flare on the left side of the Sun and an eruption of solar material shooting through the Sun's atmosphere, called a prominence eruption, (NASA/ SDO)