Two people were killed and at least 60 others injured in a colossal pileup on Montreal's South Shore on Wednesday.

Provincial police said the wreckage spanned about one kilometre, bringing some 200 vehicles to a screeching halt on Highway 15 as blinding snow blew from the shores of the St. Lawrence River onto Highway 15.

Police estimate more than 100 cars and about dozen trucks crashed, with at least 75 needing to be towed. Roughly half of the motorists involved managed to avoid disaster and were able to drive away several hours later when the road was cleared.

A school bus was near the front of the pileup, pressed against a damaged tanker truck, but police said nobody on board was injured.

The two who died were in the same vehicle, police said. Police have yet to release details about the victims.

"We know that these people were involved in a collision with a tank truck, which made the rescue operation more difficult for first responders," said Stéphane Tremblay, spokesperson for the Sûreté du Québec.

The estimated number of injuries has varied throughout the day, with the final tally hovering around 60 in total, 20 of those being serious.

The pileup began at kilometre 46 in the southbound lane at around 12:30 p.m. ET in the suburban city of La Prairie.

A 10-kilometre stretch of the highway was immediately closed in both directions. At first, transport officials thought it might stay closed until the next morning, but have since said it will open by the end of the night. 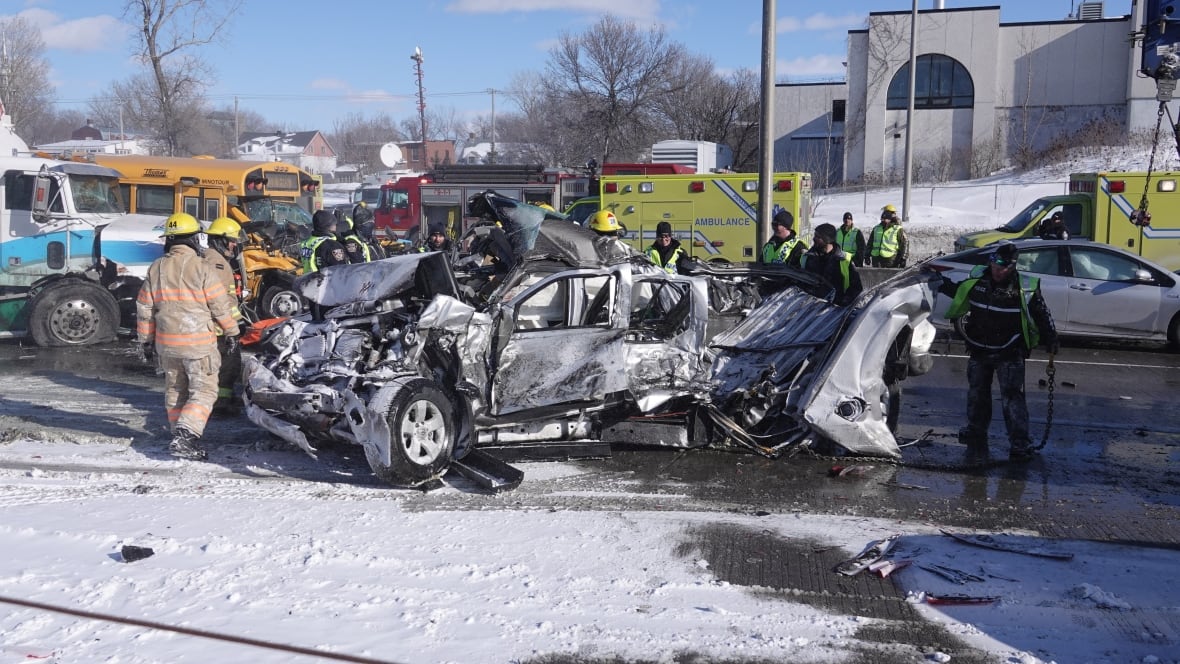 Provincial police, firefighters and ambulance workers were on the scene Wednesday. (Simon-Marc Charron/Radio-Canada)

Danielle McCann, the province's health minister, said three hospitals in the area initiated a Code Orange — a hospital-wide warning that alerts staff that multiple casualties are on the way.

"It was a very prompt operation," she said, commending rescue workers.

Firefighters had to extricate victims from at least nine vehicles. Police say about 150 people in all were tended to at the scene. Many, including those with minor injuries, were taken to a local community centre by chartered buses where a makeshift triage centre was setup.

Though the incident is still under investigation, authorities say it was likely a sudden whiteout caused by blowing snow that led to the chain reaction of collisions.

"I spoke to a few people who couldn't see anything, and then they saw trucks up close. These people were immediately pulled aside and looked after," said Sébastien Lavoie, a division chief with the La Prairie fire department.

Snow-clearing vehicles had passed through the area twice in the hour before the collisions took place, said Quebec's Transport Minister François Bonnardel at an afternoon news conference.

He noted a chain-link fence that runs along the highway is there to help block the blowing snow that gets caught up in gusts of wind from the St. Lawrence River.

The area is not considered prone to collisions as there have been no major accidents there for at least two decades, Bonnardel said.

La Prairie Mayor Donat Serres disagreed with the minister later in the day.

He said the highway was reconfigured in the early 2000s. Its height was raised, he said, creating a "springboard effect" that propels snow up to the height of windshields as strong winds blow off the vast, open section of river.

"I think we need an intervention plan and that we find solutions," he said, suggesting windbreakers be installed along the highway. (Dozens of vehicles were involved in a pileup in southbound lanes of Highway 15 in La Prairie, Que., early Wednesday afternoon. Simon-Marc Charron/Radio-Canada)

Stéphane Gagné, a driver who was caught up in the pileup, told Radio-Canada the visibility was intermittent on the highway and the pavement was extremely slippery.

Provincial police are asking motorists to avoid the area. For those who are on the road, they say drive carefully and adapt to the difficult weather conditions.

SQ spokesperson Sgt. Ann Mathieu told CBC Montreal's Let's Go that weather can be a factor in collisions, but "the most important factor is the driver."

Failing to adapt to road conditions is what causes these types of situations, she said.