The Ulughbegsaurus, a previously unknown apex predator, would have been much larger than a small species of tyrannosaur that existed at the time. (Julius Csotonyi/CBC)

It's roughly 90 million years ago, the Cretaceous period, and continents have begun to rift apart.

A small tyrannosaur — roughly the size of a large horse — peers through the ferns in what would now be Uzbekistan, listening for any sign of prey to tear into with its blade-like teeth.

But the tyrannosaur's time hasn't come yet; there's still a larger apex predator ruling the jungle — a previously unknown species that may become another piece in the puzzle of how tyrannosaurs took over and ruled Asia and North America for millennia.

Darla Zelenitsky, associate professor of dinosaur paleobiology at the University of Calgary, worked with researchers from Canada, Japan and Uzbekistan to identify a new species of carcharodontosaur — large, carnivorous dinosaurs with shark-like teeth. They announced their discovery in the Royal Society Open Science journal on Tuesday. 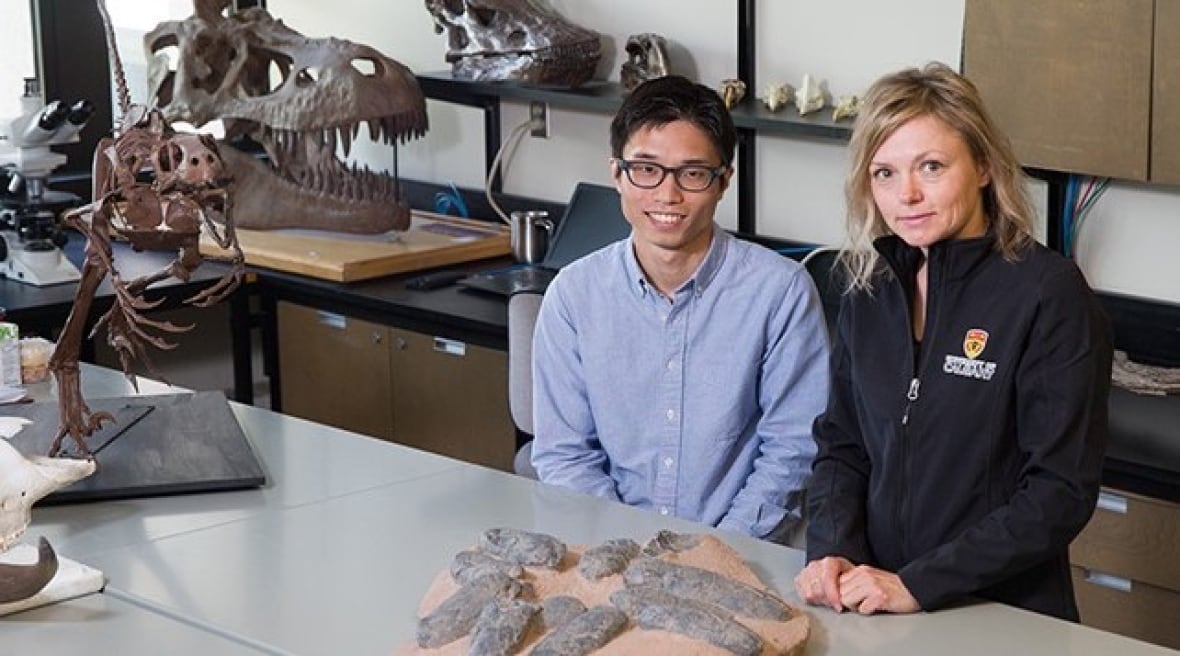 Kohei Tanaka and Darla Zelenitsky have authored a paper announcing their discovery of a new dinosaur species. (University of Calgary)

The new species, Ulughbegsaurus (pronounced oo-LOOG-bek-SAW-rus), was named after 15th century astronomer and mathematician Ulugh Beg, who lived in the region.

Like an early tyrannosaur, this carnivore would have walked on two legs, with a large head, short forelimbs and sharp claws. But that's where the similarities ended. An Ulughbegsaurus would have weighed around 1,000 kilograms and stretched more than 7.5 metres from nose to tail.

"It would have been the largest carnivorous predator of the ecosystem at that time," said Zelenitsky, who explained that the small tyrannosaurs that lived during the same period would have been one-fifth of the bigger animal's body mass.

While it's not known what caused them to die out, the disappearance of carcharodontosaurs from the ecosystem may have helped enabled tyrannosaurs to grow larger and into their dominant predator role.

"We don't know why carcharodontosaurs went extinct around 90 million years ago … [or] exactly how tyrannosaurs became apex predators that we see, like tyrannosaurus rex, later on in the Cretaceous," she said. 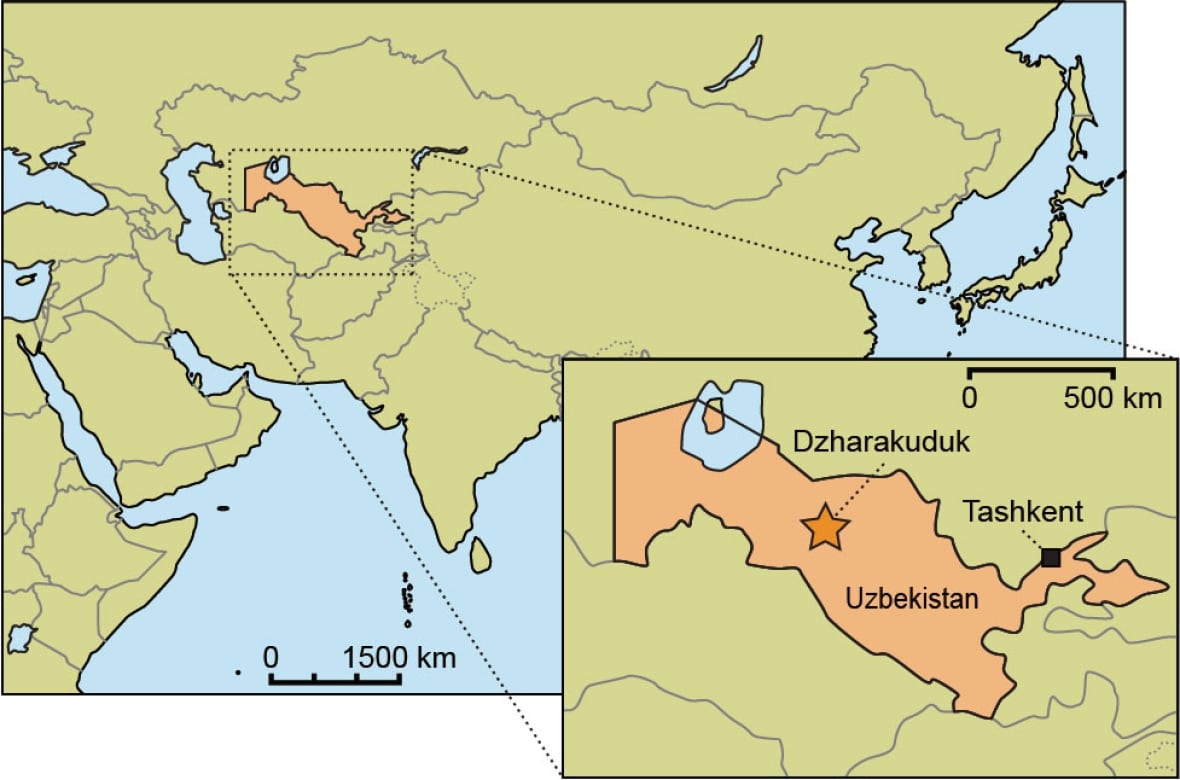 The fossil fragments of the newly discovered Ulughbegsaurus were found in Uzbekistan. (Tanaka et al. 2021)

"This window of the dinosaur fossil record is pretty murky … when you've got a window of time that's very poorly known for fossils, you're always just trying to fill in gaps.

"And this is one more gap that we were able to fill in, because this is the latest occurrence of one of these shark-tooth dinosaurs."

The new species was identified in part via bone fragments and teeth originally found in the 1980s by a Russian paleontologist as part of the Bissekty rock formation in the Kyzylkum Desert.

It was stored in Uzbekistan's state geological museum until a few years ago when Kohei Tanaka, the paper's lead author, found an upper jaw in the formation and realized it belonged to a kind of predator that hadn't been found in the area before.

"I was kind of surprised because … the fossils from this formation have been well studied," Zelenitsky said.

But the formation is largely filled with fragmented fossils, unlike the full skeletons that are more common in fossil beds in Alberta. And the discovery of a new carnivorous dinosaur like this is extremely rare.

"If we're looking at dinosaurs that are younger than 100 million years, so in the 66-million- to 100-million-year window, there's only three species of this type of dinosaur [a carcharodontosaur] known from Asia." 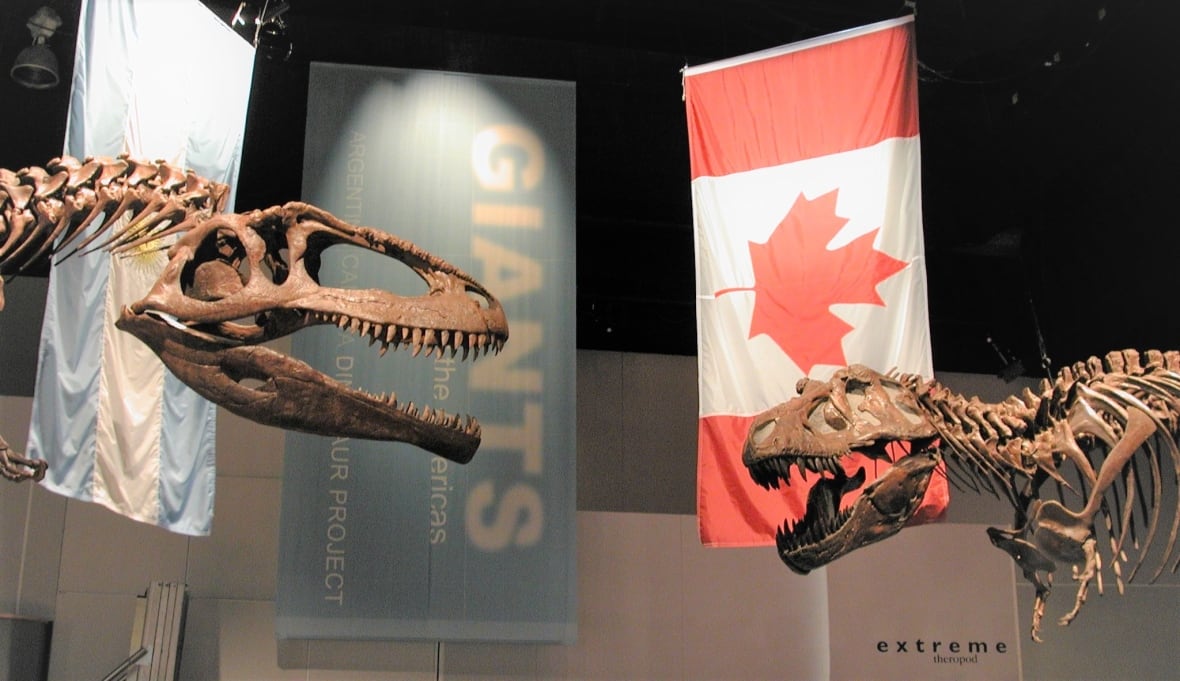 Zelenitsky is hoping the discovery will unlock more knowledge from that period.

"There is the possibility in the future, now that we know this species existed in that ecosystem, that we can find more of this animal and identify it."

This article, written by Sarah Rieger, was originally published for CBC News.