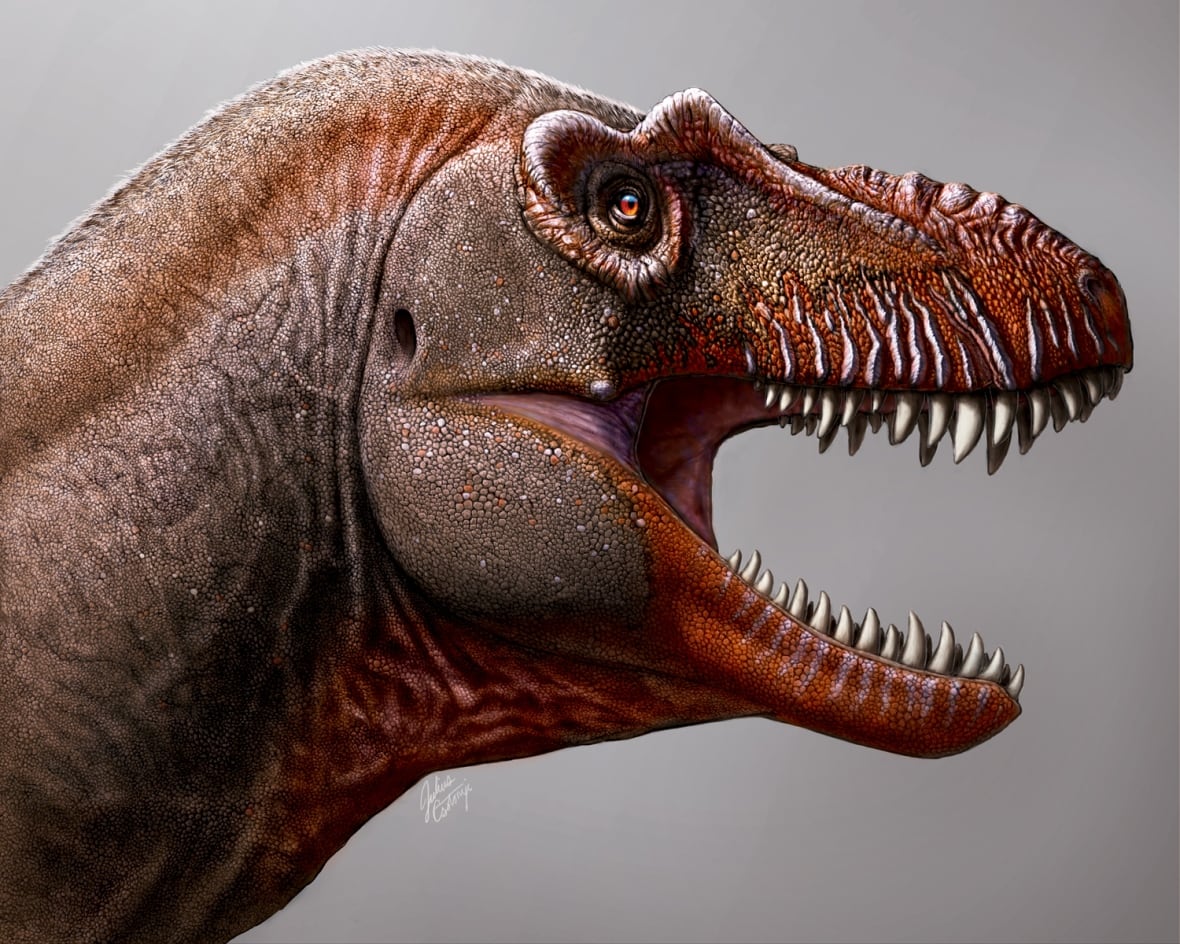 Thanatotheristes degrootorum, seen in this artist's impression, is the first new tyrannosaur species named in Canada in 50 years. (Julius Csotonyi)

A new species of tyrannosaur — the oldest ever found in Canada — has been discovered in Alberta.

Thanatotheristes degrootorum was as long as two cars lined up bumper to bumper and would have towered over an adult human. It stood about 2.4 metres tall at the hips, said Jared Voris, a University of Calgary PhD candidate who led the research identifying it as a new species.

The animal would have been a fearsome predator 79 million years ago during the late Cretaceous period, likely preying on herbivores such as the horned dinosaur Xenoceratops and the dome-headed dinosaur Colepiocephale.

Those are the only two other dinosaur species identified from the same location — a fossil site called the Foremost Formation — and the same period of time. At the time, it was coastal plain with swampy areas near an inland sea called the Western Interior Seaway that extended from the Arctic Ocean to the Gulf of Mexico.

Researchers who discover a new species have the privilege of naming it, so Voris canvassed his colleagues for suggestions.

The winner for the first part of the new dinosaur's name translates roughly to "reaper of death" — coming from the Greek god of death Thanatos and the Greek word "theristes," which means "reaper" or "harvester." It was suggested by Amanda Hendrix, a master's student in the same research group, which is led by Prof. Darla Zelenitsky, who co-authored the study.

"This animal would have absolutely been an imposing creature in the ecosystem that it lived in and it would very likely have been the apex predator," Voris said. "It was really nice to have some sort of name that encapsulated that kind of behaviour."

FOUND BY MEMBERS OF THE PUBLIC

The second part of the animal's name honours the two ranchers who discovered the fossil, John and Sandra De Groot of Hays, Alta., as they were walking along the shoreline of the Bow River in 2010. They alerted the Royal Tyrrell Museum, which labelled the partial jaws and teeth as belonging to a tyrannosaur and filed it to the appropriate drawer in their collection.

About eight years later, Voris came across it while doing research on a different species of tyrannosaur, Gorgosaurus, during his master's degree.

He noticed that it came from a rock formation where no tyrannosaurs had been positively identified before. On closer examination, he realized it was like no other tyrannosaur he had ever seen.

It's the first new tyrannosaur species found in Canada in 50 years.

One of the unique features that helped prove that was some unusual ridges on the specimen's upper jaw. Those helped identify a second, very broken specimen found by Caleb Brown of the Royal Tyrrell Museum, another co-author, in 2018.

The researchers published their description of the new species Monday in the Journal of Cretaceous Research.

Unfortunately, there weren't a lot of bones to go on — mostly fragments of its jaws with broken teeth. By looking at the impressions on both sides of the rock it came from, it appears the skull was originally intact, Voris said. 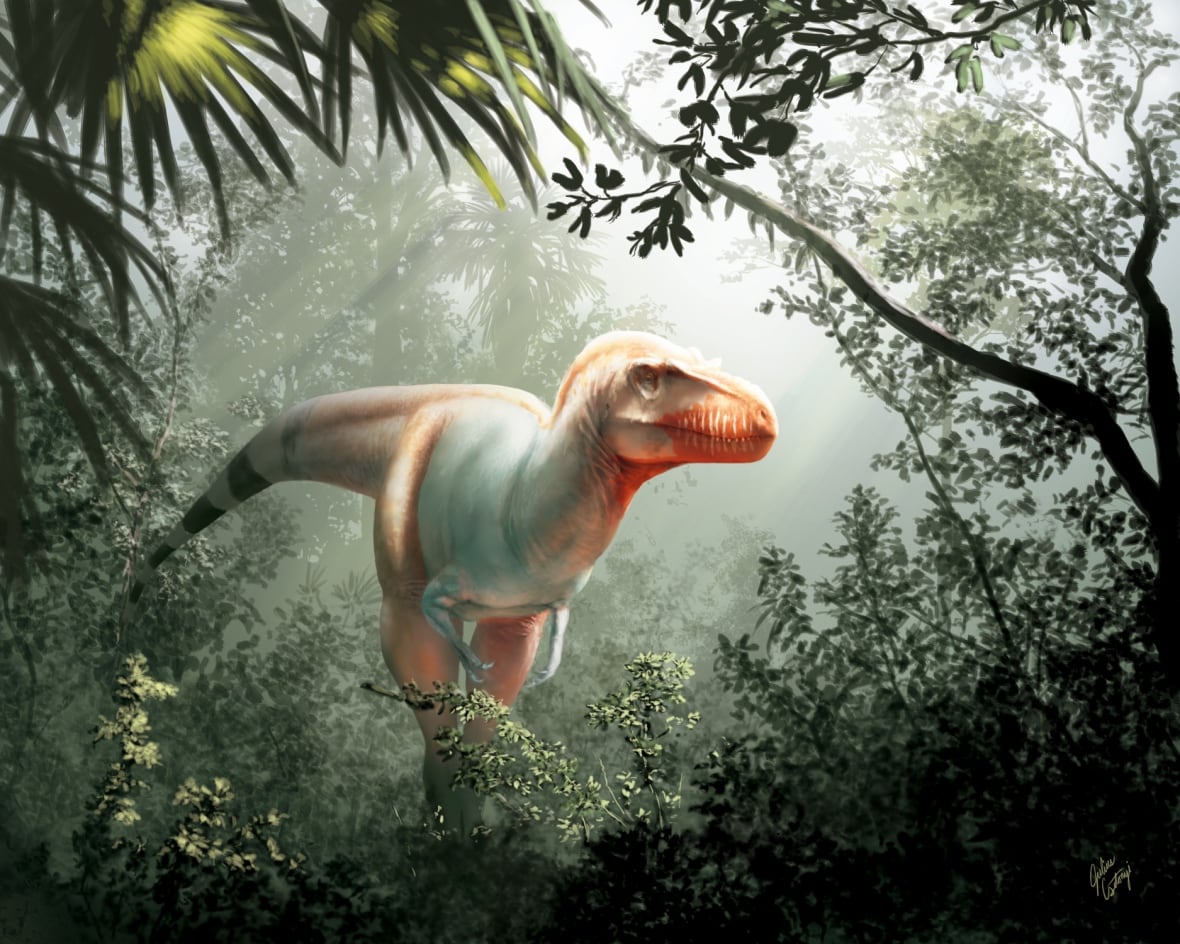 An artist's impression shows how the new species of tyrannosaur discovered in southern Alberta, might have looked. (Julius Csotonyi)

Sadly, it appears the entire skull fell out of the riverbank, and most of the bones were washed away before the De Groots stumbled upon what was left.

Still, it's a lucky find, Zelenitsky said. It is only the third dinosaur species identified in southern Alberta from this time period, and the first top predator.

"They were relatively rare in the ecosystems," she said. In the Cretaceous, as now, there were far more herbivores than predators. "These were probably only a few per cent of the animals."

Finding one helps build a picture of what the ecosystem was like in southern Alberta at this time, she said. 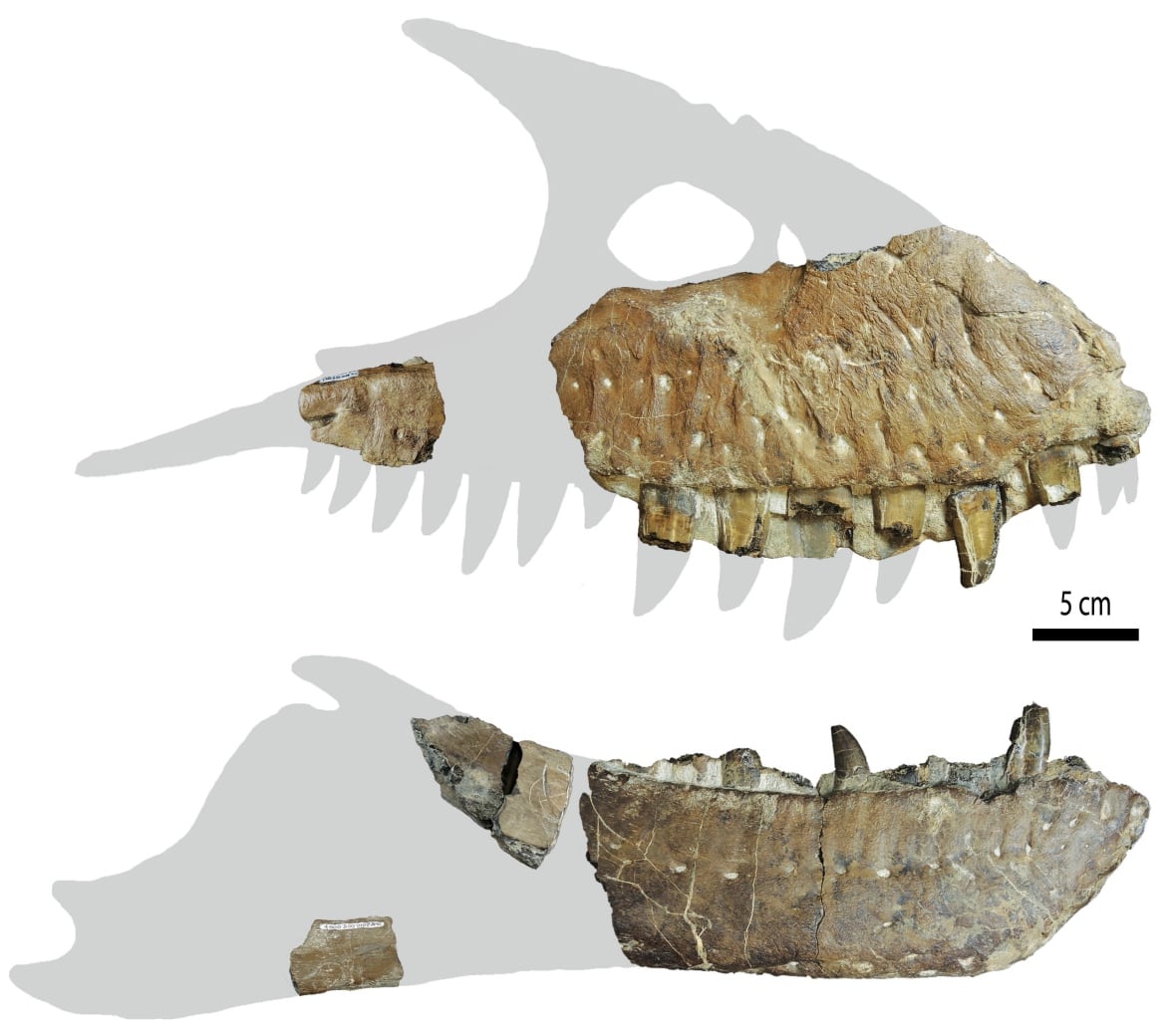 There wasn't much fossil material from the new tyrannosaur to study — mostly parts of its jaws and broken teeth. (Jared Voris)

"I started to realize, 'Well, this could actually be a new species,'" Voris said.

The most well-known tyrannosaur, T. rex, lived around 11 million years after Thanatotheristes. At the time that Thanatotheristes roamed, T. rex's closest relatives were still in Asia.

Voris and Zelenitsky both think there are more Thanatotheristes specimens out there, and hope to find more complete specimens.

"One of my goals now is to see if we can find more of another individual and see how to see exactly how different it is from some of the other tyrannosaurs in Alberta," Voris said. "I have a hunch that it might be pretty different."

The research team hopes to do some more exploration in the Foremost Formation.

While only three dinosaur species have been identified there, lots of teeth hint at unidentified species of bird-like and duck-billed dinosaurs, Voris said.

"There's just a whole bunch of new discoveries waiting to be made."

This article was written for the CBC by Emily Chung.