A "moosarandum of understanding" brings to an end the battle between communities in Saskatchewan and Norway fighting over which one has the world's largest moose statue.

Henriksen's town currently holds the record for largest moose statue in the world, a record that once belonged to Moose Jaw. The Saskatchwan city's Mac the Moose is 9.8-metres tall, while the Norwegian statue is 10 metres. Moose Jaw's Mac the Moose, left, was dethroned as the largest moose statue in the world by Storelgen in Norway. But plans are in the works to replace Mac's antlers, which will return the title to Moose Jaw. (Mariusz.ks/Wikipedia, Shutterstock)

It has been agreed that Mac will reclaim the title as world's tallest moose with alterations that will be paid for with a $25,000 donation from Moosehead Breweries. Meanwhile, the four-year-old statue named Storelgen in Stor-Elvdal, will "forevermore be known as the shiniest and most attractive moose in the world."

Tolmie and Henriksen also discussed a potential twinning of their communities as well as several events that could provide tourism opportunities for both "moose-ipalities."

PREMIER DOES THE 'MOOSE DANCE'

During her visit to Saskatchewan, Henriksen stopped by Premier Scott Moe's office. After discussing the "Moose Truce" and posing for some photos, the Norwegian politician taught the premier a "moose dance" — featured in a Visit Norway video.

Tourism Moose Jaw is currently working with engineers to figure out how to safely make Mac taller.

"Mac is a bit older, and we had to look and make sure he will be structurally sound to take on new antlers," he said. "We're waiting for those reports back and then make that assessment."

Mac is sculpted from concrete and steel and is located on the grounds of Moose Jaw's visitors' centre. It was built in 1984 by Saskatoon artist Don Foulds.

Moose Jaw will celebrate Norway Day each May 17 with an official proclamation and activities celebrating all things Norwegian. 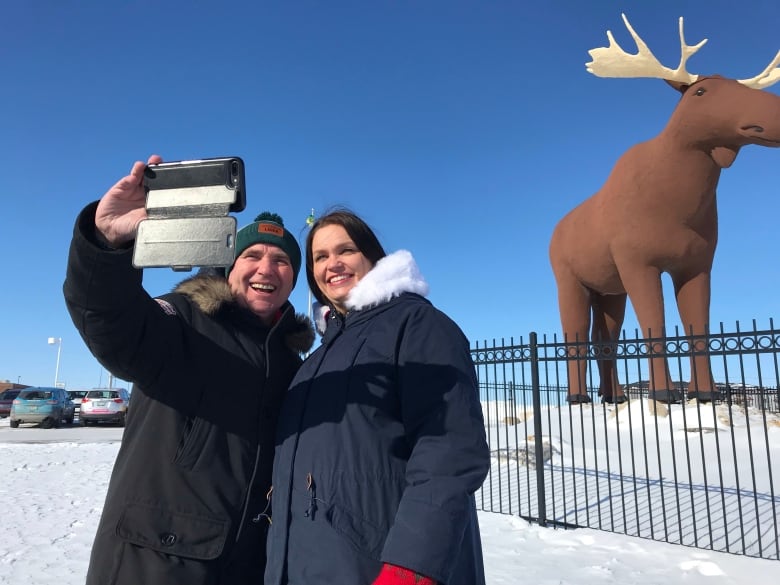 Moose Jaw Mayor Fraser Tolmie and Stor-Elvdal's Deputy Mayor Linda Otnes Henriksen made peace in Moose Jaw on Saturday, sealing the deal with a selfie in front of Moose Jaw's Mac the Moose. The two have been trading friendly jests on an international stage for weeks about which municipality had the biggest moose statue in the world. (Tyler Pidlubny/CBC )

In Stor-Elvdal, Oct. 15 is Storelgen's birthday. It will also be known as Canada Day, with an official proclamation and similar celebrations of Canadiana.

Henriksen came to Saskatchewan to meet with Tolmie on Saturday. Since then, she's been kept busy, including attending Prism Awards for businesswomen in Moose Jaw, school visits and a trip to the base at 15 Wing Moose Jaw.

"Everyone here has been so great. This has just been amazing," she said. "I am charmed."

The proposed "moosarandum of understanding" was signed by Tolmie and Hendriksen, but will have to be approved by their respective municipal councils.

This article was written for the CBC by Samantha Maciag.

VIDEO: IS THAT A MOOSE ON THE ROOF?