Mars has been growing brighter in the night sky throughout the year so far. On Tuesday night, the planet will be at the brightest we've seen it in October in 32 years. According to NASA, Mars came even closer to Earth in 2003 - 55.7 million km on August 27 - which was the closest the two planets had been in around 60,000 years. Still, by October 2003, the planets had drawn farther away from one another than they are now.

The last time Mars was this bright in our October sky was all the way back in 1988!

How will your skies be for the event, Tuesday night? Watch the video below, which presents the forecast cloud conditions across the country.

As Earth orbits around the Sun, it follows a slightly elliptical orbit that brings us closest to the Sun (perihelion) in January and farthest (aphelion) in July. On the other hand, Mars traces a wider ellipse, which is nearly oppositely oriented to Earth's. Its perihelion is close to Earth's aphelion, and vice versa.

Roughly every two years and two months, Mars and Earth experience an alignment known as Opposition. The two planets line up so that Mars is on the exact opposite side of Earth from the Sun. This year, it occurs on October 13.

Right around Mars Opposition, the two planets come close to one another. If this happened every 2 years, precisely, it would occur on the same day. Due to the roughly 2 months 'extra' tacked on, this can happen at any time of the year. In fact, there's a specific cycle where the planets draw closer and closer for subsequent Oppositions, then pull farther and farther away, then draw closer again, and so on.

The closest of these events is always when Mars Opposition occurs in late August - with Earth nearly at its farthest from the Sun, and Mars at its closest to the Sun.

RELATED: THERE ARE EVEN MORE SALTY LAKES ON MARS An infamous internet hoax tries to claim that Mars and the Moon will look the same size in the sky. Credit: NASA

While watching Mars right now is great, due to the planet's brightness in our night sky, watch out for a persistent hoax that will try to blow this fact WAY out of proportion.

Every year, a message makes the rounds over social media, with a wild and utterly false claim that the planet Mars will look as big as the Moon in our sky.

Typically, this message targets August 27, but the hoaxers always revive their story by just changing the date.

The plain and straightforward truth is, the planet Mars has never come even close to appearing as big as the Moon in Earth's skies, and it never will.

The hoax meme's problem is that it leaves out an essential detail: the only way the Moon and Mars will ever look to be the same size is if you look at the Moon with the naked eye, and Mars through a telescope.

This detail was included in an original 2003 notice to the public, which told of Mars's closest approach in some 60,000 years, which won't be repeated until 2287. The hoaxers subsequently left that out important detail when they repeated it in the years after.

Firstly, the closest Earth and Mars ever come to each other is 54.6 million kilometres. That's roughly 142 times farther away than the Moon. So, if Mars was to appear as big as the Moon, from that distance, the planet would need to be 142 times larger than it is, or over three and a half times bigger than Jupiter!

And secondly, With a 6,779 km diameter, Mars is just under twice as big as the Moon (diameter 3,474 km). So, if Mars stayed the same size to look as big as the Moon, it would have to reach a distance of just over twice as far away as the Moon, or around 750,000 km away from Earth. Mars getting that close to Earth is just as impossible as the planet suddenly inflating to 3.5x the Jupiter size!

Some of the newest additions to this hoax try to add a measure of 'doomsday' to the meme. Claims of "panic in the scientific community," due to a previous closest encounter - back in the year 57,617 B.C. - supposedly caused "changes in the earth's crust and climatic disasters." But that is all nonsense. Mars cannot have that kind of effect on Earth from over 50 million km away.

The best things to do for this event are to ignore any strange memes or doomsday claims, and as Mars Opposition approaches, get out and take in the Red Planet at its brightest. If you have access to a telescope or binoculars to get a closer look, all the better!

Sources: NASA | With files from The Weather Network. 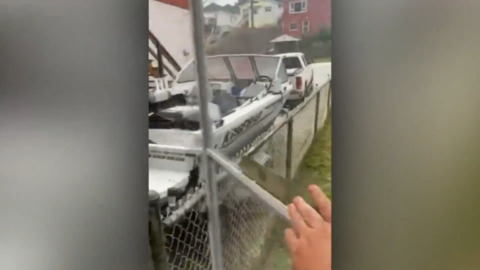