Monday, August 19th 2019, 4:25 pm - A bolt of lightning struck a tent that had fallen over during a powwow at Ebb and Flow First Nation Friday.

More than a dozen people were sent to hospital Friday evening after a bolt of lightning struck a tent that had fallen over at a powwow on Ebb and Flow First Nation, according to local health officials.

Tammy Davis was at the powwow and took a video of the lightning strike.

"Like you could just feel the ground shake," she recalled. "It looked like fire. And probably about the size of a vehicle."

Davis said RCMP sent everyone home from the powwow for their own safety.

She and her daughter went to hospital after the strike, but were sent home.

"It was loud to the point that I'm having trouble still, right after the lightning strike I felt an instant headache, an instant sore stomach."

A spokesperson from the Prairie Mountain Health Region confirmed to CBC News Saturday that a group of people rushed to pick up the blown over tent when lightning struck it. 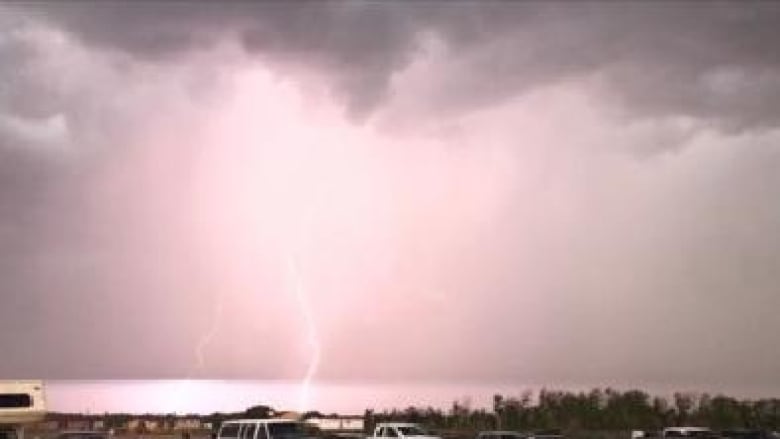 Prairie Mountain Health said 25 people were assessed on scene, but 13 people were sent to nearby Ste. Rose General Hospital with varying injuries.

By Saturday morning, all were treated and released from hospital.

Sara Hoffman, a meteorologist with Environment and Climate Change Canada, said they don't have specific information about this particular strike yet, but lightning can cause damage, even if it doesn't directly hit people.

"It's certainly possible for lightning to strike the ground and travel some distance around the strike, therefore hurting people in the vicinity of the strike," she said. Hoffman added, the two safest places to be during a lightning storm is inside a vehicle with a metal roof or a building with electricity and running water.

Hoffman said experiences with lightning, like this one, are fairly common.

"The ground can be a conduit to get to you, so it's pretty common when one lightning strike occurs, if there's a group of people in the area, lots of people are affected by that. It's not uncommon at all," she said.

Despite the setback, Davis said the Ebb and Flow powwow is set to continue Saturday evening.

She plans to go with her family. Her kids are performing and it's where they are reminded of their late father.

"We get to bond again with family and his family. So it's very, very important that I take my kids back home to know their roots and their culture," Davis said.

VIDEO: HOW HOT IS A LIGHTNING STRIKE?