Getting a goldfish is easy.

Getting rid of them? That's a whole other story.

On a hot August afternoon at the Cuts — a popular swimming hole in Springfield, near the head of Belleisle Bay — swimmers paddle and dive off the tall cliffs.

Darting through the water are dozens of orange, white and calico goldfish.

Some are thumb-sized, like the ones you'd see in a pet store. Others are bigger than your hand.

A handful of goldfish were in the Cuts last summer. But this year, they've multiplied — and fattened up.

"To be honest, they are the biggest goldfish I've ever seen," said Saint Johner Riley Keenan, who estimates some fish are 10 inches, or about 25 centimetres, long.

"I've swam with fish before," said swimmer Bonnie Ferguson."But goldfish? Not so much."

How'd they get there? The goldfish didn't get to the Cuts on their own.

The best theory is that "they were someone's pet that they released," said Graeme Stewart Robertson, executive director of the Atlantic Coastal Action Program in Saint John. 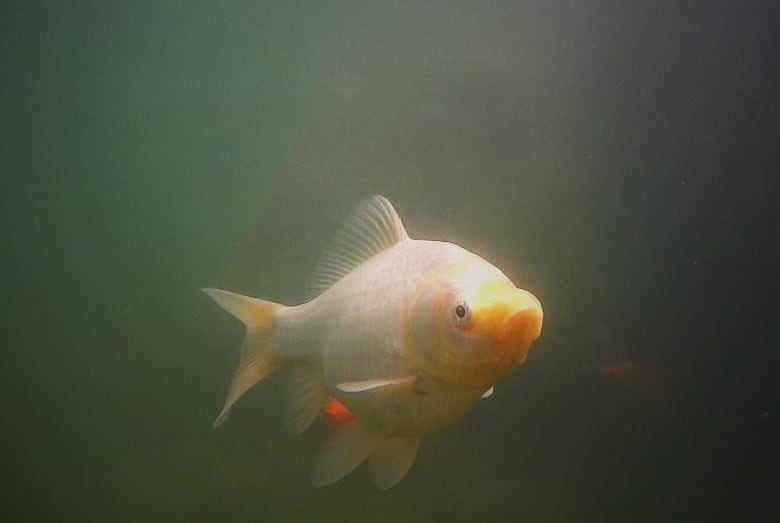 One of the beefier specimens sharing the water with swimmers at the Cuts. (Brian Chisholm / CBC)

But the consequences of setting Goldie free are far-reaching.

"When they're released in the wild, they can grow much larger — sometimes even a couple of feet long or longer," he said.

Rogue goldfish have also been spotted in Rockwood Park's Fisher Lakes and other bodies of water in the Saint John region, according to Stewart-Robertson.

ACAP workers pulling a shopping cart out of Ritchie Lake in Quispamsis once found "a goldfish that had grown so large that it clearly couldn't have entered through the gaps of the cart mesh metal anymore," Stewart-Robertson said.

"They grow to the size of the environment."

In the Cuts — a pool formed when gravel pit excavators hit a natural spring — the goldfish are isolated from other waterways.

But elsewhere, fugitive goldfish are a serious problem.

In Hamilton, scientists with Fisheries and Oceans Canada started banding and tracking the fish after up to two million goldfish were estimated to live in the harbour in 2016.

They tear up vegetation — and with no natural predators — throw the local aquatic ecosystem into chaos. 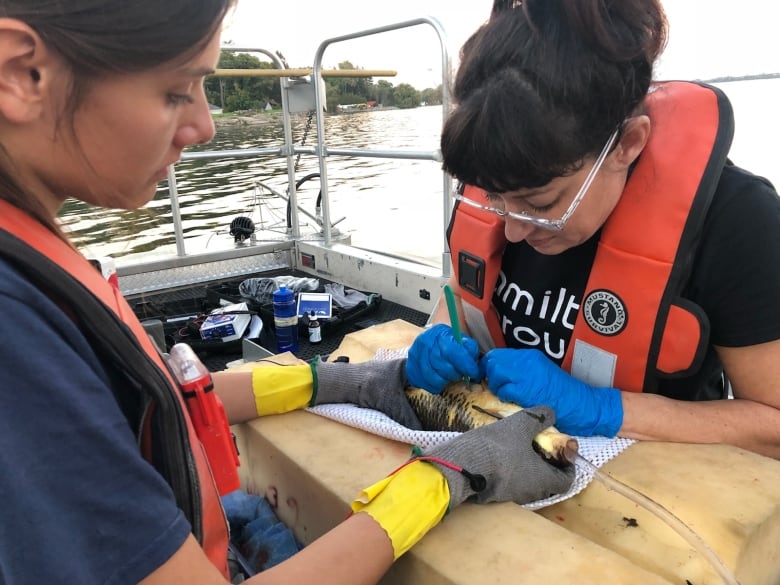 "They'll just keep feeding and growing for many years until they're causing competition problems for local, native fish," Stewart-Robertson said.

The Cuts quarry is deep enough that goldfish can spend the winter below the frost line and return in the spring to keep breeding.

"Unless something eats them," Stewart-Robertson said.

"I'm sure there are some local birds of prey who are looking forward to easily spotting a bright fish in the environment."

Radical anti-goldfish measures employed elsewhere in Canada include include electrocuting them or killing them with a natural pesticide called Rotenone.

But for the people flocking to the Cuts to swim and take pictures, swimming with the fishes is a novelty — at least for now.

"It's kind of a nice surprise when you're out for a swim," said Riley Keenan.

"It's a cool experience to see them here."

This article was written for the CBC by Julia Wright.