The Saskatchewan Aurora Hunters Facebook page started out as a place where Colin Chatfield and his photographer friends could co-ordinate how best to capture one of the greatest light shows on Earth: the aurora borealis, or northern lights.

They'd discuss strategy, techniques, locations and the gear required to capture the stunning natural phenomenon that sparks brilliant greens, pinks and yellows across Saskatchewan's prairie sky. But over the years, the page has changed.

It's grown from a local gathering place for a group of friends to a community of more than 10,000 people eager to share their own images of the night sky — including newcomers ready to learn the basics of how to take the best shot of something so present, yet evasive to an untrained lens. 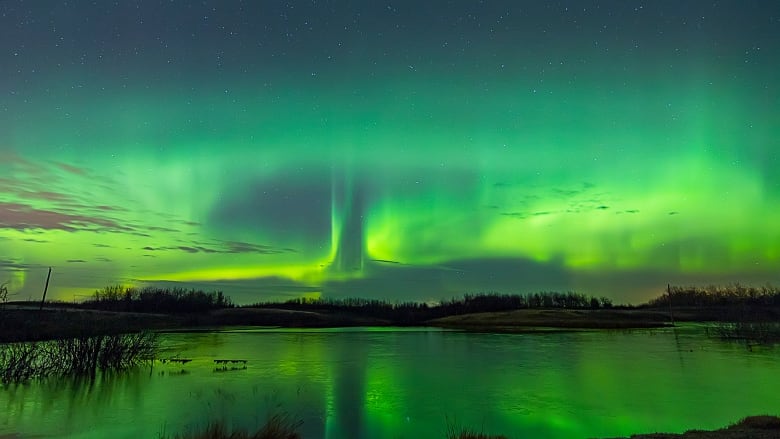 This photo of the aurora borealis was taken in 2017 near 8th Street in Saskatoon by the founder of the Saskatchewan Aurora Hunters Facebook page, Colin Chatfield. The group has more than 10,000 members. (Supplied to the CBC by Colin Chatfield.)

The phenomenon is caused by electrons and other particles travelling from the sun and interacting with gasses in the Earth's atmosphere. While it's usually visible to the human eye, it can take some time — and practice — to find the proper camera settings, lenses and timing to get a great image that truly does them justice.

Chatfield says the group's growth was a slow trickle after it was founded in 2014, but has "really exploded" recently.

"Stepping back into things now, and seeing that the group has almost doubled in size in the last year has been pretty crazy actually," he said in a recent interview.

Chatfield says the pandemic has played a role in the growth — the page now receives hundreds of requests to join every week — as people's lives have changed drastically since COVID-19 hit.

"People have had more time on their hands," he said, as people have their kids at home or are working different or more flexible hours. "If we weren't in the situation we are in right now, I think [the page] would not have been as explosive as it has been."

There are other reasons aurora borealis photography has been growing, he said.

He says for some who moved to Canada from other parts of the world, the dancing night sky is something they've never experienced before — and the same holds true for those who live or have lived elsewhere in the country.

"We have a unique opportunity here to see this fairly often, and a lot of people don't have the means to do that where they live," he said. "That's probably part of the attraction as well."

Chatfield notes while the name of the page is Saskatchewan Aurora Hunters, the group has members from across the country.

One of the new members among the 10,000 is Paula Lessmeister. A long-time photographer, she just shared her first image of the aurora on the page on Sunday, capturing a massive prairie sky filled with stars against the backdrop of the faint northern lights near her home in Spiritwood.

She says while she had little experience with night photography, she knew it was something she wanted to try and capture, even if it meant heading out at 3 a.m.

"It's the mystery and the beauty," she said.

"Not everybody gets to see that, and we're fortunate where we live that we have the chance to, so I thought I'd take a chance. It wasn't the greatest night for it, but you gotta get out there and try."

She said the strong community of people involved in aurora photography made her feel welcome and helped her get involved.

"People are so friendly and helpful," she said. "It's not like you're keeping a big secret. Everybody is willing to share tips and I see lots of helpful hints and stuff like that … so that's a large part of the appeal." 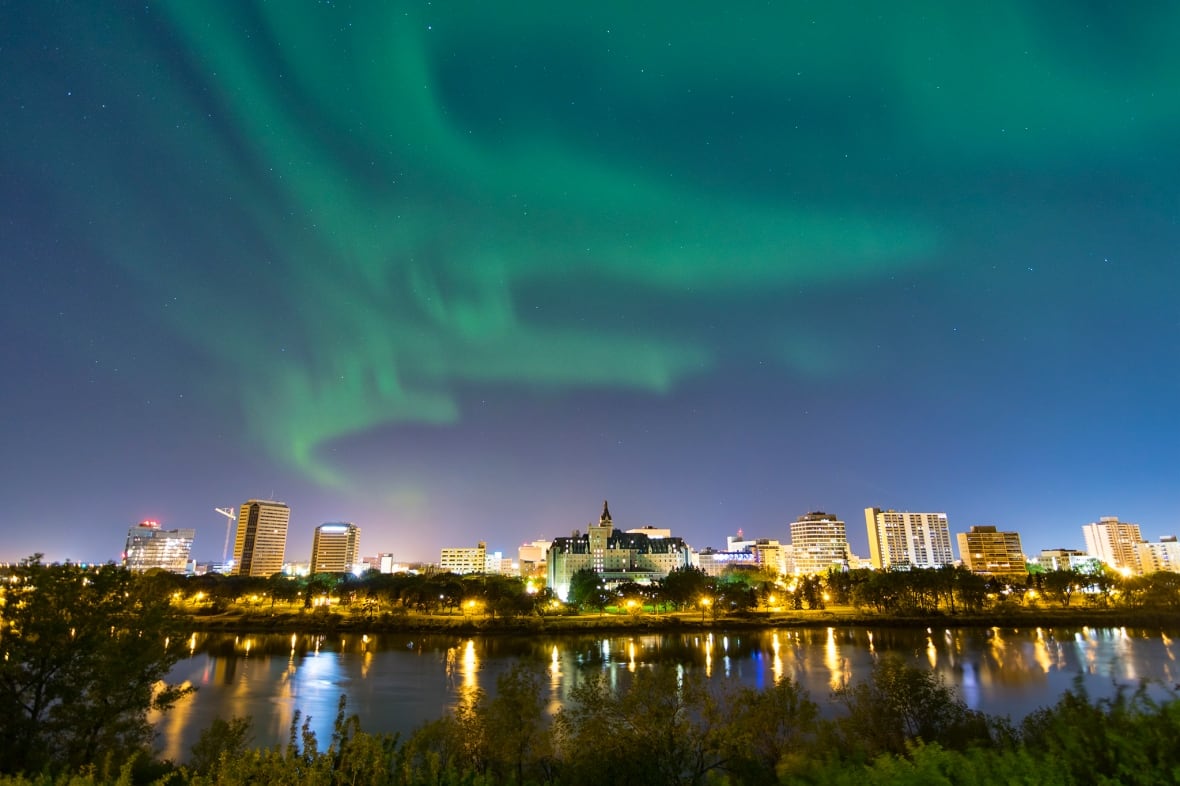 The aurora borealis can be seen over downtown Saskatoon in this photo taken by Chatfield in 2019. (Supplied to the CBC by Colin Chatfield )

She noted the experience itself was a peaceful one with no sound, a breeze and a dark night, which allowed the stars to look as if they were "just exploding in the sky."

"It was awesome to be out there," she said.

That feeling is a familiar one to Tammy Vallee.

A night-sky photographer who has been a moderator of the group since 2018, she says it's been incredible to watch the page attract so many people interested in the art form, and to see so many people ready and willing to help.

"A lot of people, I think they join not really sure what to do, and I remember being one of those people," she said. "It's really great that there's a resource out there where people can help and mentor each other and guide them through what to do.

"The first time you start anything new, it's a lot to figure out if you're trying to do it by yourself."

Vallee says her explanation of why people are so willing to help is simple.

FINDING THE BEST AURORA SPOTS NEAR YOU

Chatfield says he and hard-working administrators behind the group are ready to "explore different ideas."

He said he might gauge interest in a book of member photos, as there's no shortage of spectacular work to share.

"There's so many talented photographers in the group. It's mind-boggling," he said. "It'll be interesting to see what happens this year with the group.... The sky's the limit maybe. But maybe, in this case, it's unlimited."

He's only recently taken his camera back out to explore the night sky, and there are times when he experiences what can only be described as sky envy, when he longs for easier access to a night sky.

He sees something special when he looks at the Facebook group, too.

"It's definitely rewarding seeing something that I was able to create have this impact on people," he said.

This article was written for the CBC by Morgan Modjeski.