Fishing gear and plastic marine debris is a growing global issue. Abandoned, lost or discarded fishing gear — often called ghost gear — can contribute up to 76 per cent of all marine debris found during beach cleanups.

Estimates of the weight of abandoned fish gear vary widely by region and by type of gear used. One study retrieved 14 tonnes from the northwestern Hawaiian Islands. In one fishing region in Nova Scotia, an estimated 22 tonnes of fishing gear remains at sea. Overall, an estimated 640,000 tonnes of ghost gear is lost globally in the oceans every year.

This derelict fishing gear continues to catch fish, including commercially valuable and threatened species, and other marine fauna. For example, ghost gear, especially nets, are responsible for entangling seals and sea turtles. One abandoned fishing net in Puget Sound in the United States is expected to catch two invertebrates per day, one fish every three days and one seabird every five days.

It also costs fishers. Ghost gear reduces catch rates and cuts into profits, it is expensive to replace and it can be dangerous — getting tangled in propellers and snarling anchors.

But a new project aims to get ghost gear out of the ocean and provide the fishing industry with the opportunity to be part of the solution.

Ghost gear can damage seafloor habitats and break down into microplastics. Wildlife may eat large pieces of it — and small ones — or become entangled in it. When plastic coatings from wire crab or lobster traps fragment over time, microplastic particles can be ingested by marine life, disrupting natural hormone production and endocrine function, causing shell disease and affecting reproduction.

Read more: Microplastic pollution is everywhere, but scientists are still learning how it harms wildlife

Research suggests that gear losses are the result of environmental conditions, gear conflicts among fishers and other industries, poor gear condition and inappropriate disposal at sea.

Lost gear can be transported long distances by tides and currents, resulting in tangles (called snarls), which can be hard to relocate and retrieve. Losses can be accidental, but inappropriate discarding of gear at sea also occurs due to inefficient and inadequate solid waste management for end-of-life fishing gear.

GHOST GEAR IN THE MARITIMES

Commercial lobster is the dominant and most valuable fishery in the Maritimes, with 3,000 license holders and exports valued at $2.1 billion in 2017 — one-third of Canada’s fishery exports.

The region is deeply connected to the fishing industry. Fishers and those working in related industries rely on healthy commercial fish stocks and habitat to support their livelihoods.

Although fishers retrieve gear when possible and return lost gear to other fishers when they encounter it, some gear inevitably remains lost at sea. A recent study using seafloor imagery estimated 1.8 million pieces of marine debris remain on the Bay of Fundy seafloor, 28 per cent of which is fishing debris. Although the economic losses caused by ghost gear in the Maritimes is unknown, recycling of retrieved ghost gear can create lucrative economic opportunities.

Given the scope of the problem, national and international policies and programs to reduce sources of plastic marine pollution are growing, along with global movements to address ghost gear, such as the Global Ghost Gear Initiative.

As of 2020, Fisheries and Oceans Canada (DFO) has implemented reporting requirements for lost and retrieved gear in all groundfish and shrimp fisheries. However, existing licence conditions prohibit retrieving gear outside of the prescribed fishing season if the gear does not belong to the fisher who found it. 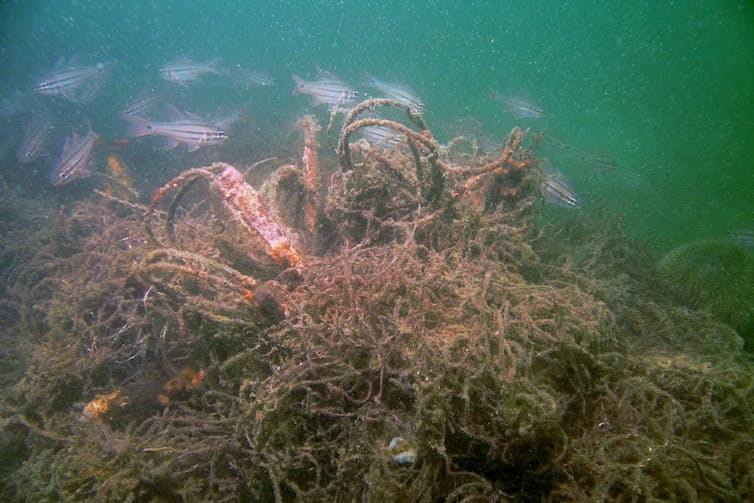 Even so, DFO has supported more than two dozen programs valued at $8.3 million to reduce the amount of abandoned, lost or discarded fishing gear, and implemented the Sustainable Fisheries Solutions and Retrieval Support Contribution Program.

Coastal Action is leading one of these projects in the Maritimes. The collaboration between industry, academia and government aims to prevent, reduce and assess impacts of ghost gear in three lobster fishing areas on Nova Scotia’s south shore from 2020 to 2022.

Ten rope recycling bins will be installed at wharves throughout the region and ghost gear will be retrieved by fishers from identified hot spots areas over 159 days at sea. A recent pilot study collected more than three tonnes of rope in wharf recycling bins around the Bay of Fundy. The project will also conduct an impact assessment of ghost gear during retrieval to determine impacts on marine life and to estimate economic losses.

Sustane Technologies Inc. will recycle retrieved rope into diesel fuel. Innovative mapping technologies will be used in partnership with Dalhousie University and the Ocean Tracking Network. Mapping of ghost gear will improve the retrieval process by using side-scan sonar technology to create detailed maps of the seafloor and identify where lost gear has settled.

Fishers do not want to lose gear and they recognize that ghost gear continues to harm marine life and impacts their bottom line. Future programs to retrieve ghost gear helps protect marine ecosystems and creates economic opportunities for communities that rely on fragile marine resources.