Early in the morning on Dec. 13, 1941, the citizens of Huaraz, Peru, heard a terrifying rumble echo across the valley. Within minutes, a torrent of water, ice and rocks had poured over the city, destroying a third of it and killing at least 2,000 people.

The natural dam of rocks and loose sediment that had held back Lake Palcacocha had failed. Eighty years later, its collapse remains one of Peru’s most tragic natural disasters.

This type of catastrophic event is known as a “glacial lake outburst flood.” Glacial lakes, such as those found throughout the Cordillera Blanca in the Andean mountain range, are often dammed by glacial moraines that can reach heights of over 100 metres. They are impressive, but they are often unstable.

Heavy rainfall and rock, snow or ice avalanches can raise water levels in moraine-dammed glacial lakes, generating waves that overtop the moraine dam or cause it to collapse, releasing huge amounts of water. These natural disasters are only expected to become more common in Peru — and around the world as climate warming melts glaciers at historically unprecedented rates.

This dark history has spurred international research into the stability of the moraines damming Peru’s glacial lakes. The Cordillera Blanca in northern Peru contains the highest concentration of tropical glaciers in the world. Predicting when these outburst floods will occur — and how destructive they will be — is of enormous concern to the over 320,000 people who live downstream. 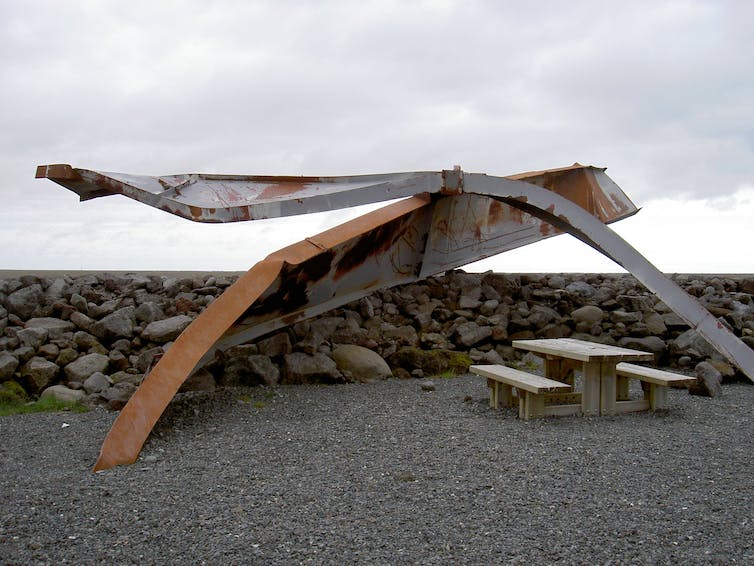 The twisted remains of a steel bridge destroyed by a glacial lake outburst flood in Iceland in 1996. (Chris 73/Wikimedia Commons), CC BY-SA

Geological engineering models use variables such as the size and volume of the lake, height, width and slope of the moraine dam, and channel and valley dimensions to estimate the stability of the moraine dam and the risk of flood. Unfortunately, these models don’t include much information about the composition of the moraine dam, which can vary signifcantly depending on on its location and mode of formation.

My research, part of a collaboration between McMaster University and Peru’s National Institute for Research on Glaciers and Mountain Ecosystems (INAIGEM), focuses on establishing the origin of these moraine dams and the physical characteristics of the dams and the lakes they hold back. These features can have considerable influence on the stability of the dam and its potential for failure.

USING UAV TO UNDERSTAND THE STRUCTURE OF MORAINE DAMS

Glaciers create moraines by transporting, depositing and pushing boulders, sands and fine-grained silts and clays along the valley floor and adjacent valley walls, often forming a barrier. But one moraine may be much more stable than another, depending on the materials it contains and how it is formed.

WATCH BELOW: SEE THE STUNNING BEAUTY INSIDE A GLACIAL CAVE

Water may leak through weak points in the moraine’s stacked layers, taking sediment with it, or loose rocks may fall after a disturbance such as an earthquake. These weak points make a complete collapse of the moraine dam more likely. Locating these weak points is an important step in predicting the stability of the lake dams and can allow geoscientists and engineers to design more effective remediation strategies.

My colleagues and I are analyzing the architecture of large lateral moraines, which form along the sides of glaciers, in southern Iceland using un-crewed aerial vehicles (UAVs or drones) to collect high-resolution images. We use these images to identify and classify areas of coarse- and fine-grained sediment that may form zones of water leakage and sediment removal and cause the dam to fail. We’ve planned similar high resolution UAV surveys of moraine dams in the Cordillera Blanca for early 2022.

The research will enhance the reliability of predictive models to identify potential glacial lake flood hazards. It will also identify areas where remediation work, such as the building of additional outlet channels or armoured barriers, is most needed to strengthen the moraine. 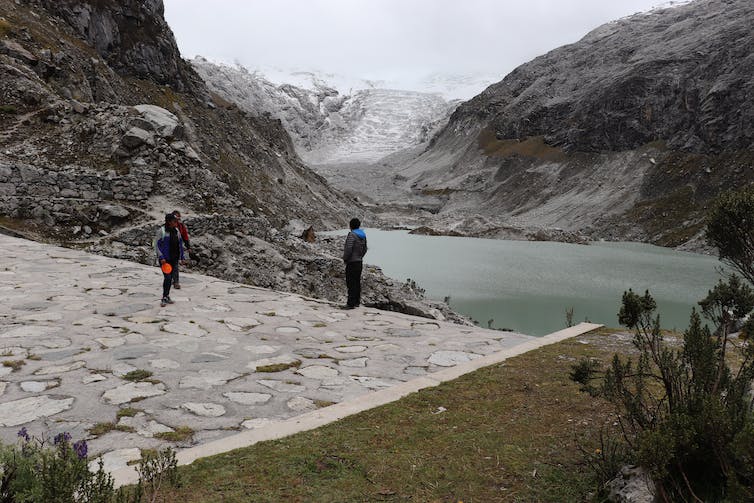 This will be particularly important as glaciers melt more quickly, the volume of water held by these natural moraine dams builds, and the destructive power of floods also continues to increase. A recent study by researchers at the University of Calgary showed that the volume of water in glacial lakes has increased by 50 per cent globally since 1990.

Since the beginning of the 19th century, an estimated 165 moraine-dammed glacial lake outburst floods have occurred. In addition, approximately 12,000 deaths worldwide can be attributed directly to glacier floods.

Our research in Peru will provide new insights into moraine dam stability that can be applied to other regions, such as Bolivia, the Himalayas and the Canadian Rockies, which are also experiencing an increased risk of glacial lake outburst floods as climate warming continues to melt glaciers.