As the hurricane-strength winds of Dorian were lashing trees and downing power lines, two monarch butterflies were inside a Nova Scotia home spreading their wings for the first time.

Jessica Bradford, 31, had self-evacuated from her coastal house in West Lawrencetown, N.S., with the endangered species in tow.

She had raised them from caterpillars inside a terrarium and had hoped the butterflies would stay in their chrysalis until the powerful storm passed.

"They both emerged… and later that evening, when the storm was making landfall, they were ready to go out in the world," said Bradford, who took refuge at her parent's home in Bedford, N.S., as the storm hit last Saturday.

"But that wasn't a possibility." 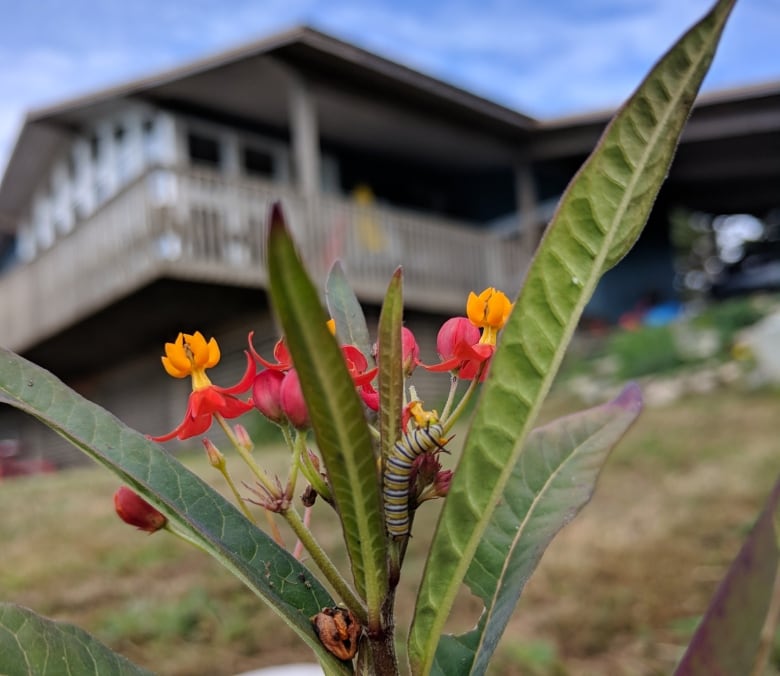 Monarch caterpillars feed solely on milkweed and monarch butterflies need it to lay their eggs, so the plant is critical to the survival of the species. (Submitted by Jessica Bradford)

Earlier this year, Bradford planted milkweed in her garden in the hopes of attracting the recognizable orange and black butterflies.

Monarch caterpillars feed solely on milkweed and monarch butterflies need it to lay their eggs, and so the plant is critical to the survival of the species.

"I would check the leaves pretty much every day," said Bradford, who works for an environmental non-profit and learned how to raise monarchs several years ago.

"One day, I found a couple of caterpillars on the plant."

At the beginning of their lifespan, the caterpillars are "teeny tiny," a little bigger than an inchworm. Bradford started caring for five of the itsy-bitsy caterpillars.

They went through a series of moults until they were "chunky-looking caterpillars" with yellow, white and black stripes, said Bradford.

"From there, when they're ready, they will start turning into a chrysalis," said Bradford, adding that she quickly discovered caterpillars poop frequently, and their habitat requires daily cleaning.

Two weeks ago, she released her first butterfly, now destined to embark upon an incredible 5,000-kilometre journey to Mexico to spend the winter on forested mountaintops.

Two of the other caterpillars were in their chrysalis, which start out as a creamy green colour and become more transparent as it becomes closer to becoming a butterfly.

"The night before the storm, I saw that two of the chrysalis were very transparent and I was really concerned…. There was absolutely no way I was releasing the butterflies in the middle of a hurricane," she said.

The chrysalis starts out as a creamy green colour and become more transparent as it becomes closer to becoming a butterfly. (Submitted by Jessica Bradford) "That morning, the winds were starting to pick up and the ocean was already looking wild. I started gathering some possible food plants for the butterflies, just preparing to keep them in captivity for longer than I hoped for."

She packed an overnight bag and left her home with her pet rabbit in one hand and butterfly terrarium in the other.

A few hours after she arrived at her parents' home in Bedford, she noticed the two butterflies were starting to spread their wings for the first time. 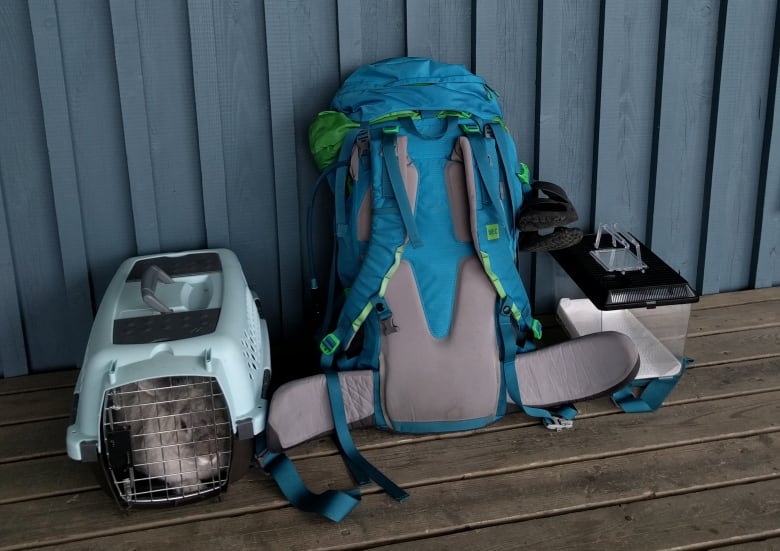 Jessica Bradford self-evacuated from her home in West Lawrencetown, N.S., with her pet rabbit and butterfly terrarium in tow. (Submitted by Jessica Bradford)

"I really didn't want them to emerge during the storm. I had made myself responsible for these endangered butterflies' well-being and I felt a sense of responsibility to make sure they were well cared for," said Bradford.

"It was kind of neat for me because it was the middle of a storm, I'm not going outside, and I had nothing to do… It was a good distraction from some of the mayhem going on in the city."

When the butterflies come out of their chrysalis, their wings are wet and compacted and so they spend some time drying out and inflating their wings.

During this entire process, Bradford was posting updates on social media. She asked her followers to help name the butterflies.

"We ended up with Dorian and Donair," she said with a laugh. 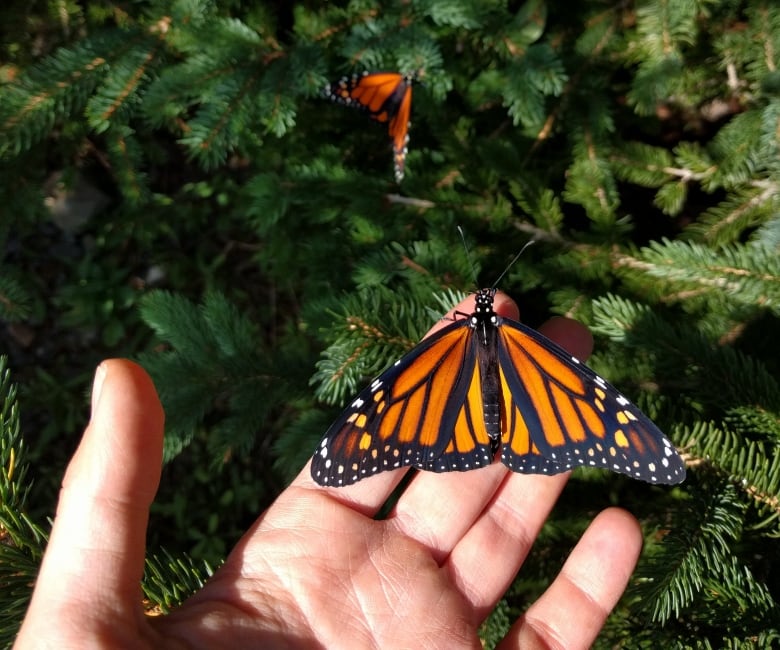 Jessica Bradford returned to her home in West Lawrencetown, N.S., the morning after Dorian hit to release the two butterflies. (Submitted by Jessica Bradford)

Bradford cared for the butterflies and kept them in captivity until the following morning, when she returned to her home in West Lawrencetown.

"I found a nice sheltered spot, the winds had died down a little bit, it was nice and sunny, and I was able to release both of them," said Bradford.

"It was wonderful. I opened up the top of the terrarium, took one of their plants out, and let them go… It was a really good feeling." 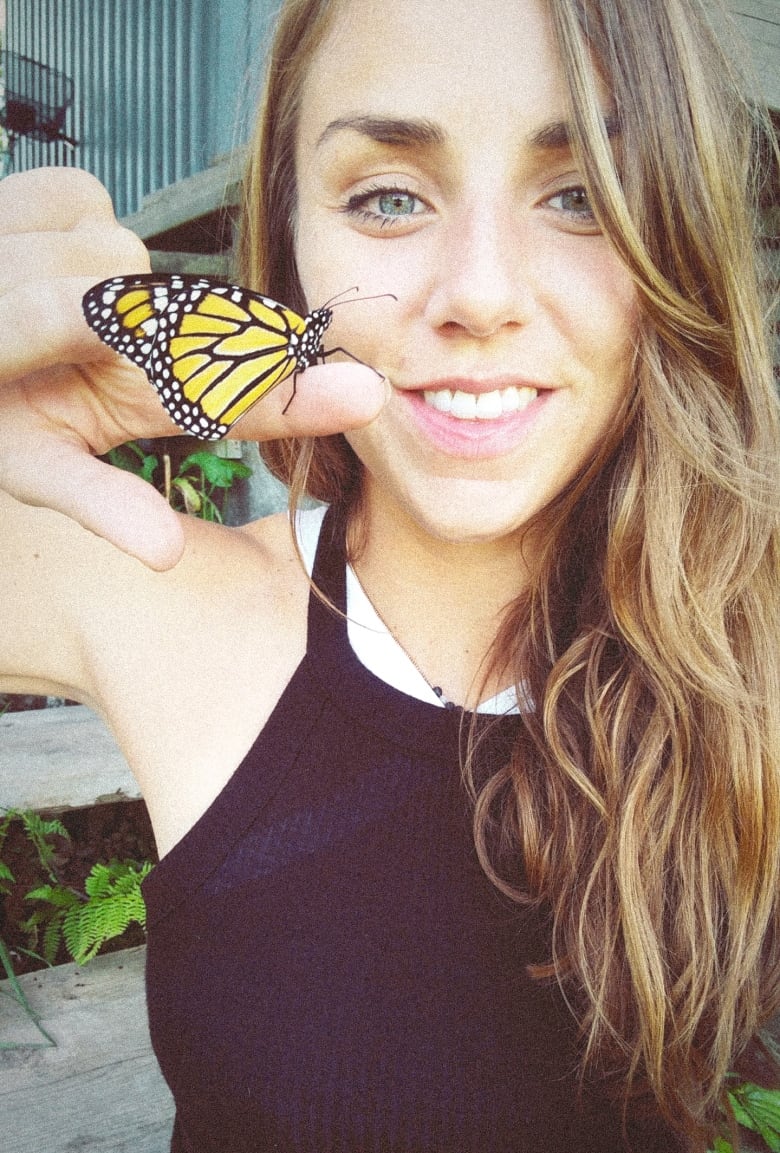 Bradford released another butterfly on Tuesday morning, and another was almost ready for release.

Although it was Bradford's first time raising monarchs, she said it won't be her last.

"I've loved this process from start to finish," she said.