The first systematic exploration of the interior of HMS Terror is offering Parks Canada underwater archeologists the tantalizing prospect that well-preserved written documents might eventually be discovered within the Franklin Expedition wreck.

If that's the case — if there are charts or meticulously recorded logs of what might have transpired aboard the reinforced wooden warship in the mid-19th century — it could go a considerable way toward unravelling the mystery surrounding the ill-fated polar mission.

Earlier this month, underwater archeologists spent seven days exploring the wreck that lies about 24 metres below the surface of the appropriately named Terror Bay, off King William Island, Nunavut.

"Overall I think what surprised us most was just the incredible state of preservation," project director Ryan Harris said in an interview Tuesday. 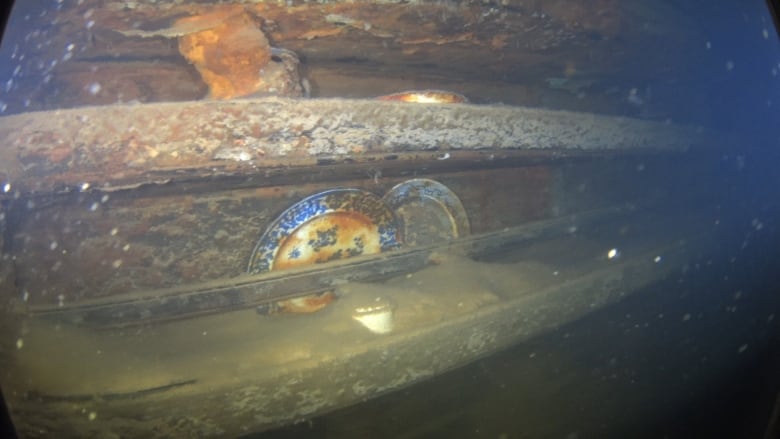 Plates and other artifacts sit on shelves next to a mess table where a group of lower-ranking crew members would have taken their meals on HMS Terror. (Underwater archeology team/Parks Canada)

HMS Terror, along with HMS Erebus, set sail from Greenhithe, England, in 1845 in an expedition led by Sir John Franklin in search of the elusive Northwest Passage. The ships were beset by ice off King William Island in 1846 and deserted two years later, according to a note left by the crew in a cairn. Franklin and his 128 men all died.

But what really happened on the expedition has been an enduring mystery. The discovery of the Erebus wreck in 2014, and the Terror two years later, in many ways only raised more questions, particularly regarding how the ships ended up where they did. (Erebus lies in the shallow waters of Wilmot and Crampton Bay, about 100 kilometres south of the Terror.)

Rough weather severely limited attempts to explore the wrecks in 2018, but this year it was a different story.

"We enjoyed just absolutely exceptionally co-operative weather conditions," said Harris. "Often it was flat calm on the water, allowing us to do a considerable number of dives on the site." 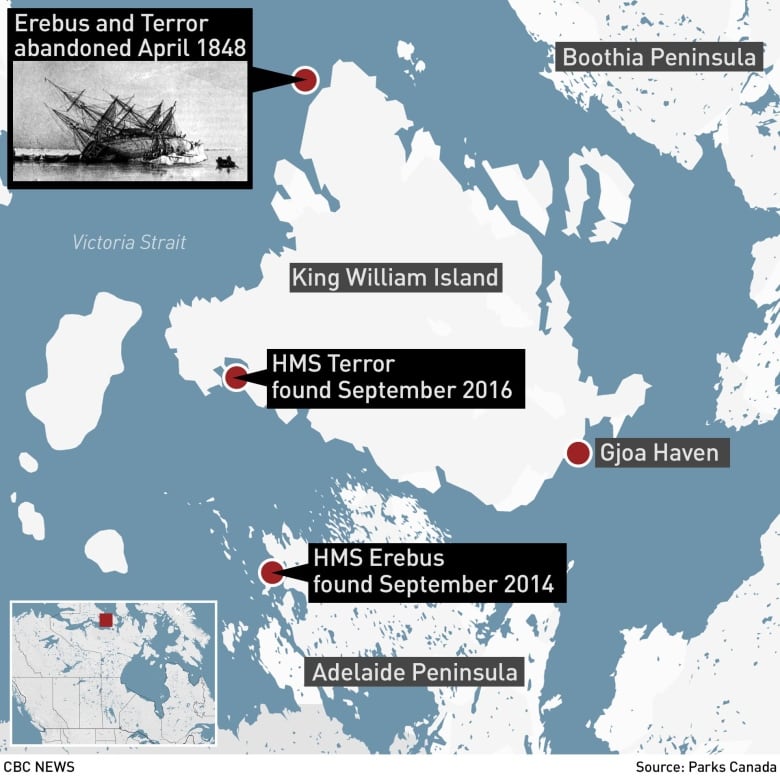 Rough weather severely limited attempts to explore the wrecks in 2018, but this year it was a different story.

Through those 48 dives, the archeological team focused on 3D structural mapping of the wreck and deployed a tiny underwater robot seven times to explore inside, manoeuvring it through four openings in the ship and capturing video deep in the lower deck.

"Really the highlight of that seven-day period of work on the Terror was a series of exploratory searches inside with our remotely operated vehicle," said Harris.

More than 90 per cent of the lower deck was recorded, including 20 cabins and compartments. Only the sleeping quarters of Capt. Francis Crozier remained inaccessible.

Video recorded throughout the wreck shows beds and desks, along with shelves that have some items on them. Tumblers and stemware glasses sit on other shelves in the area thought to be the officers' mess pantry. Glasses, bowls and plates — not broken — were seen in the area where the common sailors would have been.

The condition of the wreck is in large part a result of where and how the Terror landed on the sea floor. The deep, cold water of Terror Bay aided in the preservation, along with the lack of natural light and oxygen, and a deep sediment that has settled in wave-like patterns throughout the wreck.

Parks Canada considers Crozier's cabin to be the best-preserved space on the lower deck. Particularly intriguing is what might lie hidden away in the drawers of his desk, which is covered in that sediment, in some places up to half a metre deep.

"It's really tantalizing to contemplate, for sure," said Harris.

As much as the Parks Canada team is excited by the well-preserved state of the wreck, there is caution in extrapolating too much from what has been observed so far, or making pronouncements that might have to be walked back later when further information is found.

"The process of archeology is fairly meticulous," said Harris.

Still, some observations stand out.

"The point that the propeller is in its operating position is quite a surprising find," said Harris. 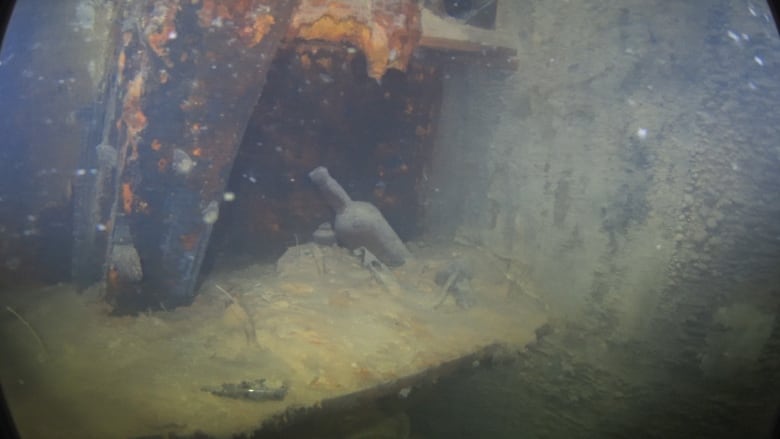 Bottles and other artifacts sit on a shelf in a cabin on the lower deck of HMS Terror. (Underwater archeology team/Parks Canada)

The wreck also gives the appearance of a ship that was deserted, and "settled to the sea floor without violent action," Harris said.

"How exactly that came to pass, we're going to have to carefully examine and try to figure it out."

No human remains were discovered, and no artifacts were recovered during this year's exploration of the Terror. Any artifacts recovered in the future will be co-owned by the federal government and the Inuit, as set out in a recent agreement.

"As joint owners of the artifacts, we share Parks Canada's excitement over the amazing potential to unlock more of this mystery, which, combined with Inuit traditional knowledge, will help paint a more complete story of the Franklin Expedition and its fate," Pamela Gross, president of the Inuit Heritage Trust, said in a release.

This year's exploration of the Terror is also revealing insight into the sailors' way of life. Harris said underwater archeologists "can start to see the social arrangements on the ship." One mess table differs from the next one beside it, for example.

"It's really a unique opportunity to examine a highly compartmentalized and organized Royal Navy ship in the age of discovery in the Arctic," Harris said.

Future plans include having the archeologists go inside the ship to explore each cabin, looking for insight into the private domains of individual officers.

But so far, nothing discovered on HMS Terror has specifically identified any individual. With the amount of sediment that has settled throughout the wreck, you can only see "the big, obvious things," Harris said.

Archeologists also left equipment near the Terror wreck that will record water currents over the next year in hopes the data might shed light on water movements in and out of Terror Bay.

"Were both ships together in Terror Bay at some point? Hopefully time and scientific inquiry will tell."

The Parks Canada team is now working at the Erebus site and hopes to be there "as long as the weather and ice conditions hold," Harris said, ideally until Sept. 15 or 16.

This article was written for the CBC by Janet Davison.