Sherif Mohsen holds up a bottle of hand sanitizer he initially mistook for water in a Toronto grocery store. (photo supplied to the CBC).

Sherif Mohsen doesn't consider himself to be the complaining type, but he knew he had to speak up after coming close to drinking 70 per cent alcohol hand sanitizer thinking it was water because it came packaged in a bottle typically used for beverages.

VIDEO: HERE'S HOW TO PROPERLY WASH YOUR HANDS

Health Canada fast-tracked approval of hand sanitizers to address the shortage sparked by the COVID-19 pandemic. Breweries and distilleries took up the call and switched from boozy beverages to alcohol-based hand sanitizer.

The plastic containers normally used for sanitizers were also in short supply, which forced some companies to use beer cans, wine bottles and other beverage containers to package the hand sanitizer.

He reported the product to his local poison control centre in Toronto and to the Institute for Safe Medication Practices Canada (ISMP), a group which works to reduce the risk of medication errors.

"As soon as we saw [Mohsen's] pictures and we went to look at other products across Canada, we knew right away there was a big risk out there for consumers," said Carolyn Hoffman, CEO of ISMP which put out an alert warning of potential alcohol poisoning from hand sanitizers.

"We know there's a good intention [on the part of manufacturers.] Now there's a big risk on the other side," she said.

VIDEO: HERE'S WHY YOU SHOULDN'T USE HAND SANITIZER WHEN YOU BBQ

LABEL 'LOOKS LIKE IT COULD BE A WINE PRODUCT'

Canadian Distribution Channel (CDC) owner Bruce Khabbazi says he had no choice but to use soda bottles because it's impossible to source alternate containers. He said the company has been using snap caps like the kind you find on standard packaging as lids for the last three and a half weeks. The Selwyn, Ont.-based company bottles several types of liquor under the Persian Empire brand name, according to its website.

Khabbazi says the sanitizer, which contains a bitter-tasting additive, was sold to several major supermarket chains but its current orders are going to government customers.

"We run two shifts helping the Canadians to get the product out to the health care centres and hospitals," said Khabbazi.

ISMP received a separate report where a child brought a container up to their lips and tasted a tiny bit of sanitizer. Hoffman is not sure if it was the same product Mohsen alerted her about.

The number of exposures to hand sanitizers reported to poison centres has nearly doubled from 105 reports in January to 200 in April, according to Health Canada.

Hand sanitizers in beverage containers have popped up in Manitoba supermarkets packaged in wine bottles and beer cans. 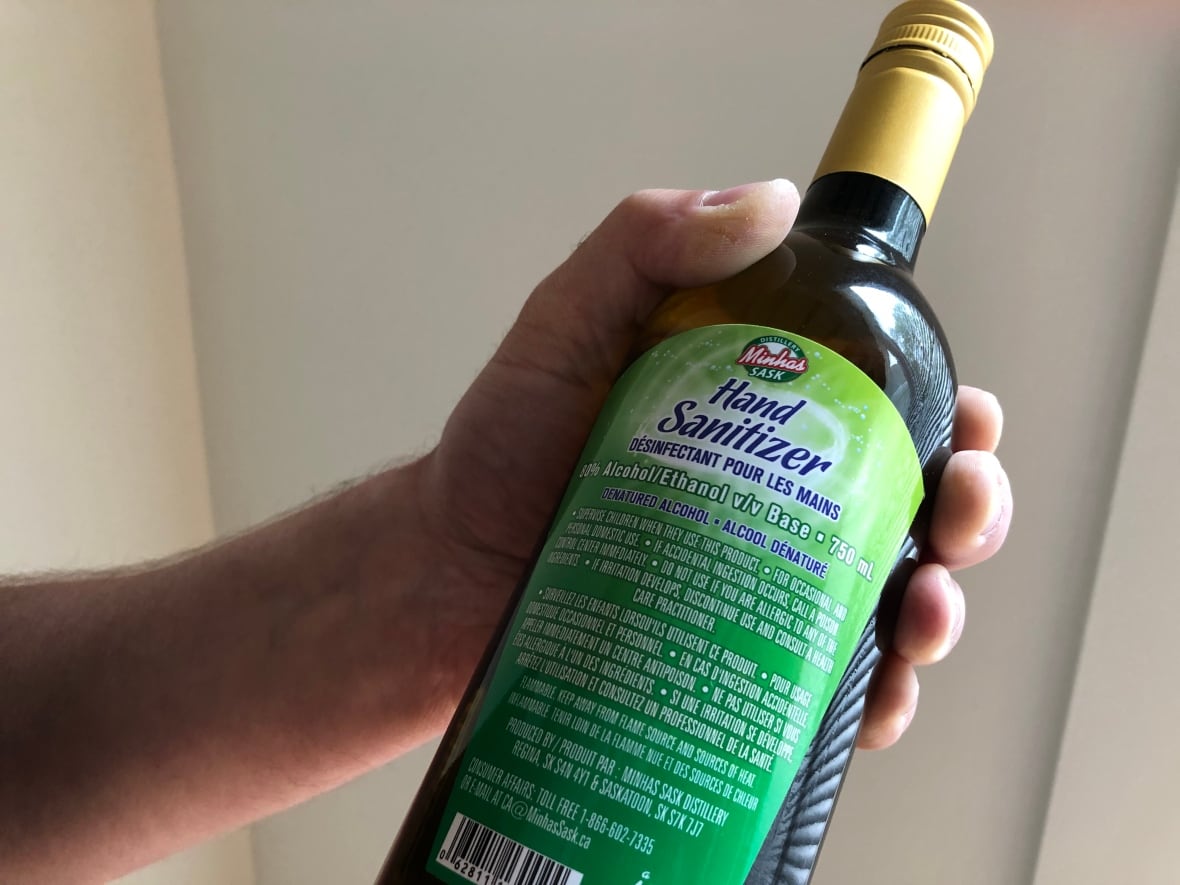 Minhas Sask Distillery in Regina packaged 80 per cent alcohol hand sanitizer in a wine bottle. Hoffman gives Minhas credit going above and beyond Health Canada standards by adding a bitter substance to the sanitizer to discourage consumption, but she says changes to the label could make the product safer.

"Hand sanitizer is clear on it, but the label itself looks like it could be a wine product," said Hoffman whose organization has almost 20 years of experience in designing labels for medications to improve safety and clarity.

"We would provide advice to make that 'for external use only' larger to make it in a different font, larger font and a different colour to make it very prominent. We would advise this manufacturer and others to use those flammable and explosive graphic designs," said Hoffman.

Manitoba-based Farmery Estate Brewery's hand sanitizer is packaged in a beer can with highly visible flammable and explosive icons.

"There does seem to be a real intent to be clear what it's for and not to consume it," said Hoffman, who noted Farmery's label incorporates some of her organization's safety recommendations. 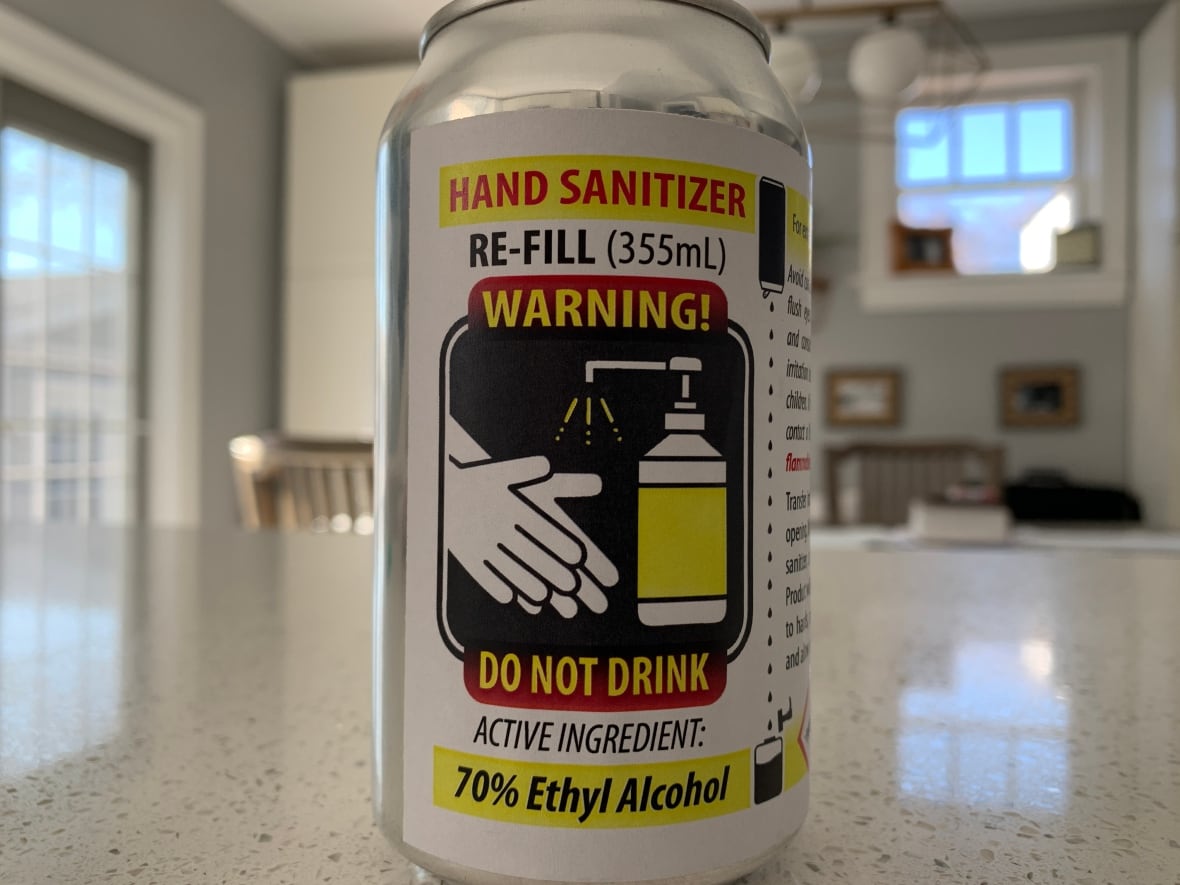 Farmery's hand sanitizer is packaged in a beverage can with a large 'do not drink' warning on the label. (Caroline Barghout/CBC)

Health Canada says sanitizers made by both both Minhas and Farmery are authorized for sale in Canada.

"Cases will be opened for follow-up to verify if there are any non-compliances with labelling requirements," wrote Health Canada in an emailed statement. The spokesperson said verifying compliance is not the same as an investigation.

The department said it has worked with industry to ensure that hand sanitizers are not mistaken for food or beverages. Last month it released an advisory warning Canadians of the dangers of hand sanitizers and other cleaning products.

Health Canada has not responded to a media request about the CDC-branded hand sanitizer identified by Mohsen.

University of Manitoba public health physician Dr. Joss Reimer says in normal times, she would never recommend selling something that could be harmful in packaging that looks like something to drink, but COVID-19 has created shortages.

Reimer says the risk for children is still high even with good labelling.

"If a small child drank half a beer, they might not feel well, but they're unlikely to have any long term effects. If they drank half of one of those hand sanitizer bottles, they could have severe alcohol poisoning and end up in the hospital," said Reimer.

She said proper storage is critical. It needs to be kept away from children and away from other alcohol in the home. Reimer suggests parents have a conversation with their children and teens to let them know the dangers of consuming hand sanitizer.

She said another group who are at risk are people who are alcohol-dependent and may have no other alcohol available. The high alcohol content can lead to alcohol poisoning.

She says to contact the poison control centre if hand sanitizer is ingested.

The ISMP recommends pouring hand sanitizer into a different container (such as a spray bottle) that has been emptied, cleaned and dried, or replacing the cap of the existing bottle with a pump to make the product looks different from drink containers. It should also be labelled as being "for external use only."

Sherif Mohsen believes the lack of clear labelling was likely just an oversight on the part of the manufacturer.

"It's a dangerous oversight," said Mohsen. "I think the labeling should be [the manufacturers's] responsibility."

He says he could see why Health Canada doesn't have the capacity to fully monitor compliance during a pandemic.

"There needs to be some kind of checks and balances, especially when it comes to safety, especially if kids are at stake."

This article was written for the CBC by Joanne Levasseur.