An estimated 700 people have been displaced from their homes in Fort Simpson, N.W.T., the mayor said Monday morning, after the community of about 1,200 was flooded during seasonal ice breakup over the weekend.

"They're down the highway, some of them with motorhomes, camps — setting up a bush camp, and things like that."

He said other residents have gone to stay with relatives or friends.

A final evacuation order was issued in Fort Simpson at about 3 p.m. on Sunday. Whelly said that about 60 people had stayed in the community after the evacuation, but most then left when the power went out. The papal grounds in Fort Simpson, N.W.T., where people gathered to welcome Pope John Paul II in 1987, were flooded on Saturday, before the river rose even higher. A general evacuation order was issued on Sunday afternoon. (Jonathan Antoine/Submitted)

He said the Mackenzie River level on Monday morning was at about 15 metres, the threshold for a general evacuation, and about the same as it had been on Sunday night. Roads in the community are underwater, he said, and some houses have been "inundated" by water.

"There's some places that are quite badly damaged," Whelly said.

"The ones in the low-lying areas, some of them are completely surrounded by water if not, you know, having water two feet, three feet up the walls of their house."

He said on Monday morning that he could look down on the papal grounds in town — named for Pope John Paul II's visit in 1987 — and see outhouse buildings "floating around."

"They were on cement pads. These aren't just little outhouses, these are fairly substantial buildings. They're disconnected and floating around," he said.

"I've never, ever seen the water in my life this high or the ice. It's really undescribable," he said.

Buggins said he's been trying to keep evacuees informed about what's going on in town. He's had little rest over the past few days.

"A lot of people have been asking about their houses, and I'm trying to do my best to try to keep everybody kind of updated … the stress levels are very high." 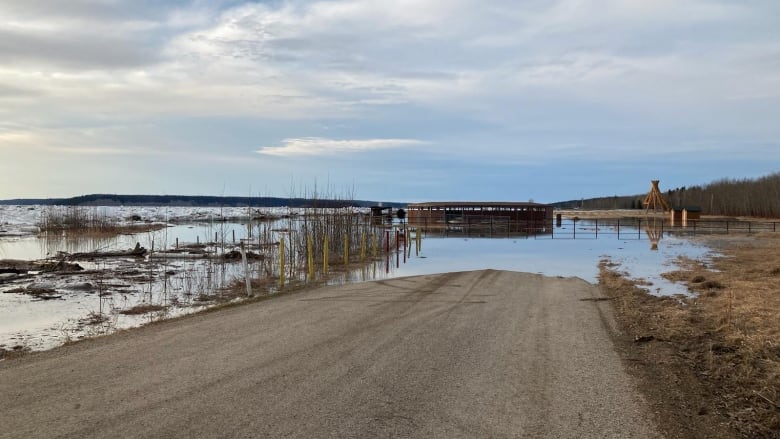 Fort Simpson Mayor Sean Whelly said Saturday morning that rising water levels on the Mackenzie River have started to flood areas of the island, including the Flats, and have made some roads impassable. (Sean Whelly/submitted to the CBC)

Whelly said he visited some residents at the town's camping area on Sunday evening, and that they were doing well and accepting the situation as best they could. Still, "they're anxious to see just how high this river might go," he said.

He said officials had gone to look upstream on the Liard and Mackenzie, to know what to expect.

"It did look like there was a fair bit of ice still yet to come," Whelly said.

"We can hope that the Mackenzie doesn't come right now. Because if it does, then we definitely have a whole lot more problems," he said.

Roger Pilling, chief of Fort Simpson's volunteer fire and ambulance service in town, said on Monday morning that the town's water supply may become a concern. Without power, the local pumphouse is not operating, and flooded roads — including the causeway into town — are preventing water trucks from getting to people.

"Really, at this point, you can just keep your fingers crossed that this will be over sooner than later. But we're all hanging in here," he said.

"It's been a couple of pretty brutal days, but we're still looking forward."

He said he has an amazing group of volunteers to help out.

Communities across the South Slave are facing unprecedented water levels as northern waterways begin their annual spring melt and breakup.

Emergency management teams in Hay River, N.W.T., are telling residents on Monday to be on "high alert" as still-rising water levels threaten flooding across the community. A flooded road in Fort Simpson on Saturday. (Val Nahanni/Submitted)

Closer to Fort Simpson, homes in Jean Marie River have also been damaged by water and contaminated with fuel after the Mackenzie River flooded that community of about 75 people over the weekend, according to the community's chief.

Chief Stanley Sanguez of the Jean Marie River First Nation told the CBC the band office and the school — in the lower-lying downtown area — were also affected.

Speaking on Monday morning, Sanguez grew emotional as he looked around.

Sanguez said earlier that cell service had been restored in Jean Marie River early Sunday afternoon, but they still didn't have power because the power plant has also been damaged by water and fuel.

Doug Prendergast, manager of communications for the Northwest Territories Power Corporation (NTPC), said power to the community was intentionally turned off on Friday night.

"If the water goes down, then I'm hopeful we get the power hooked back up," Sanguez said.

With files from Loren McGinnis and Hannah Paulson.