A rare bird was spotted in Yukon last week.

Birders flocked to Haines Junction to spot a hawfinch, which was thousands of kilometres out of its usual range.

Cameron Eckert, a director with the Yukon Bird Club, says the bird normally spends winters about 6,000 kilometres away — in Japan.

The sighting was so rare that he says it made a national record.

He consulted with multiple databases and birdwatchers in different jurisdictions across Canada to confirm it.

The nearest record of a hawfinch near Yukon he could find was when one was seen in Anchorage, Alaska, a few years ago.

"I think had there been a historic record that I possibly could have missed, it would've come to light by now," said Eckert. 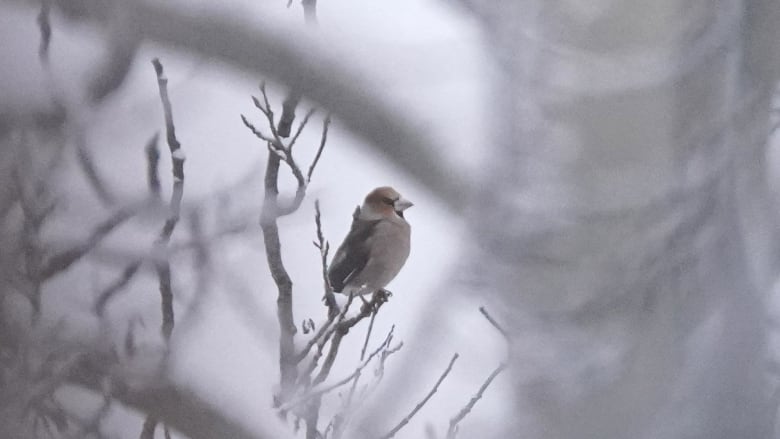 Birders flocked to Haines Junction last week to spot what they say is the first Canadian recorded sighting of a hawfinch. (Submitted by Cameron Eckert)

The hawfinch was first seen very briefly in the town of Haines Junction on Dec. 14 by long-time birder Wolf Riedl. Despite thorough searches, it wasn't until two weeks later that it was seen by Millie Hall.

Eckert worked alongside local birder Julie Bauer, who called him up along with a few other birders in Whitehorse who came into town to try to see it for themselves.

"Not only is the bird remarkable but the community kind of all-eyes-out looking for this bird and getting the word out ... [it was] a real team effort."

Birders from the territory were able to get photo confirmation, including Eckert who was able to snap a shot at the end of last month.

"We'd be walking down the street checking out people's bird feeders, you know, right in their yards, and they're all very welcoming. They'd say 'come on and have a look at my birds too!"

"It's really cool birding around a small community like that because you just got really the sense that everyone was on board for finding and seeing the bird," said Eckert.