Fireballs streaking across the sky in late March set off an epic hunt for the space junk that hit Earth with a boom — in one case metres from a Washington state trailer home with an older couple inside.

The fiery re-entry of the remains of a SpaceX Falcon 9 rocket into Earth's atmosphere on March 25 created a light show that was captured on video by people from Oregon to British Columbia.

Images of the bright display lit up skies and social media. The fragmented rocket's re-entry also sent a data signal alerting a trio of meteorite detectives interested in objects that survive the atmosphere's intense heat and how far it travels. 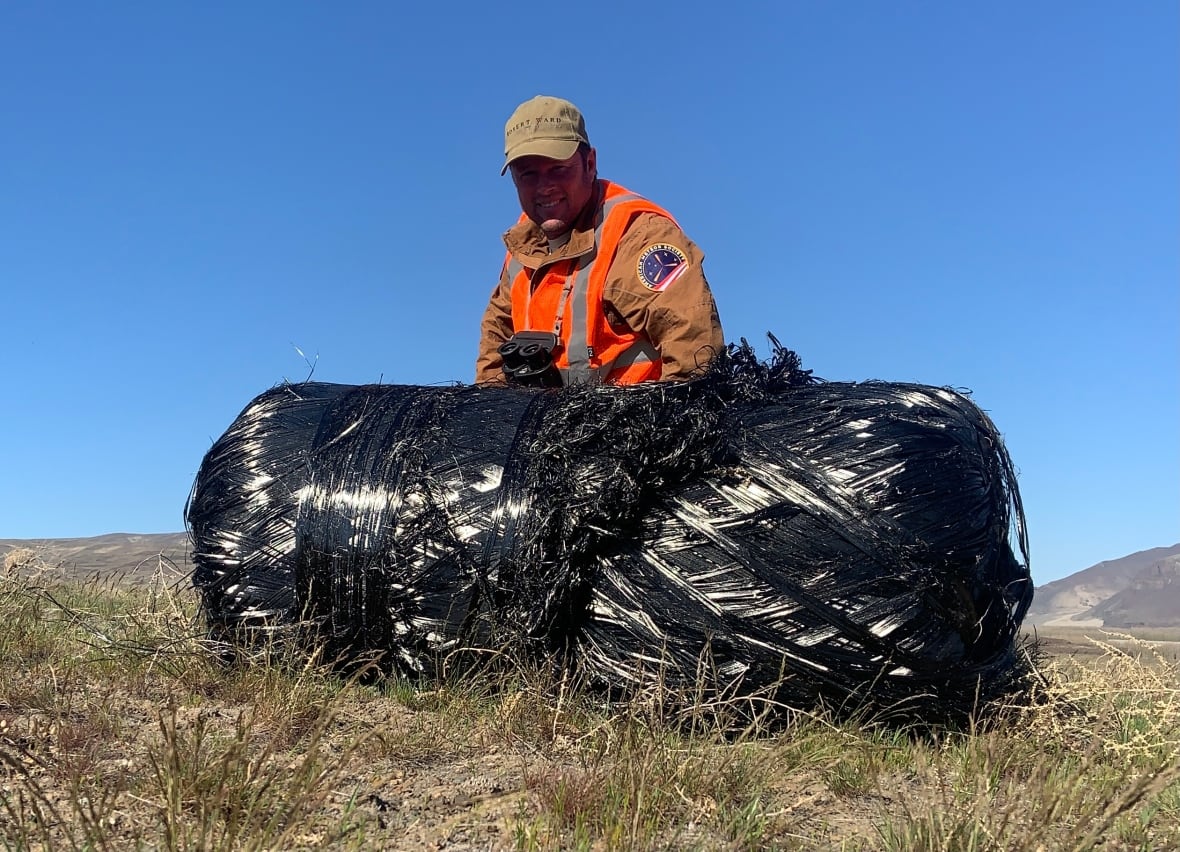 Meteorite hunter Robert Ward poses at the Yakima military training range east of the Columbia River with a carbon-fibre-wrapped pressure tank that contained super-cold helium and was part of the SpaceX Falcon 9 rocket that fell to earth in late March. (Robert Ward)

While most wayward rockets burn up in the atmosphere, a few survive, in this case, smashing into the Earth in eastern Washington state.

So far nobody from SpaceX, Nasa or the Federal Aviation Administration has taken much interest.

But Prescott, Ariz. "space cowboy" Robert Ward did, rushing to hunt for the rocket's remains.

"Anything that falls from space, I'm fascinated by it," said Ward. "When man's creations resist the force of nature, I find that intriguing."

Ward has spent 31 years tracking meteorites and co-ordinates with Mike Hankey, a software developer with the American Meteor Society in Bethesda, Md., and Ken Howard, a meteorologist with the National Oceanic and Atmospheric Administration in Oklahoma.

"You are literally hunting for trash. It has no real value," said Hankey.

But it still excites him.

"There's always a treasure hunting aspect to this ... in finding something that just landed on Earth from space," Hankey said.

He says witnesses end up with valuable data on their phones if they take video, which can be used to determine important details.

Hankey says he uses an app he created by revamping an old crowdsourcing tool to glean data from eyewitness accounts and triangulate the location of whatever fell to Earth.

Howard, the meteorologist, analyzed the weather data, and between them, they were able to pin down the flight path of what was left of the Falcon 9 within the distance of a few football fields.

Ward then flew north from Arizona to Washington state on his first hunt for space garbage. It's not unlike hunting for meteorites, which, he says, can be a dangerous business. 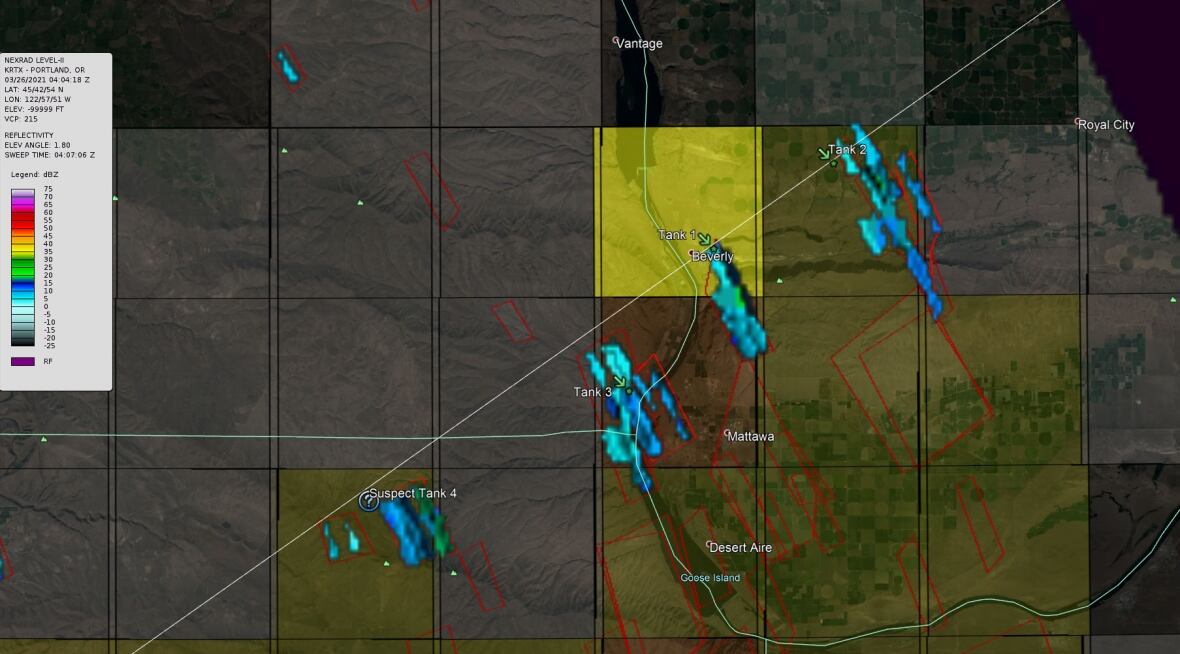 This image shows how the data from radar revealed the locations of tanks that were recovered in Washington state after parts of the SpaceX Falcon 9 rocket fell to earth. (Mike Hankey American Meteor Society)

Over the decades, he says he's been shot at, attacked with a machete and even jailed for weeks in the Middle East after he was accused of spying while meteorite hunting in the Oman desert.

Ward says he came closest to death after he was bitten by a Rocky Mountain tick while hunting for hunks of rock from the Sutter's Mill meteorite that fell to earth in 2012.

So he wasn't phased when an irate homeowner pointed a shotgun at him in April as he hunted down tanks from the Falcon 9 rocket.

The black cylinder-shaped object had landed 15 metres from a trailer home in Mattawa, Wash.

Ward says the wife was friendly, but the husband aimed a gun at him, and the sheriff ended up hauling the tank away.

The tanks are wrapped in carbon fibre composite and contain super-cold helium under high pressure, which, he says, were inside Falcon 9's larger liquid oxygen or LOX tank and played a part in the failure of the one of the spacecraft's rocket.

Ward says each of the cylinders appeared remarkably intact after hitting temperatures of 1,480 C during re-entry, probably because they were protected inside another tank.

The 90-kilogram tanks were found not far from a bend in the Columbia River, east of Yakima. Ward says they are bound in black carbon fibre that breaks off, almost like needles and acts like fibreglass.

"It's really nasty stuff. I wore protective gear, but I was itching for days after."

Ward says loaded the two tanks he recovered into a Ford F150 and drove home to Arizona with the plunder. This week, he got word that another had turned up, not far from where he found the first three. 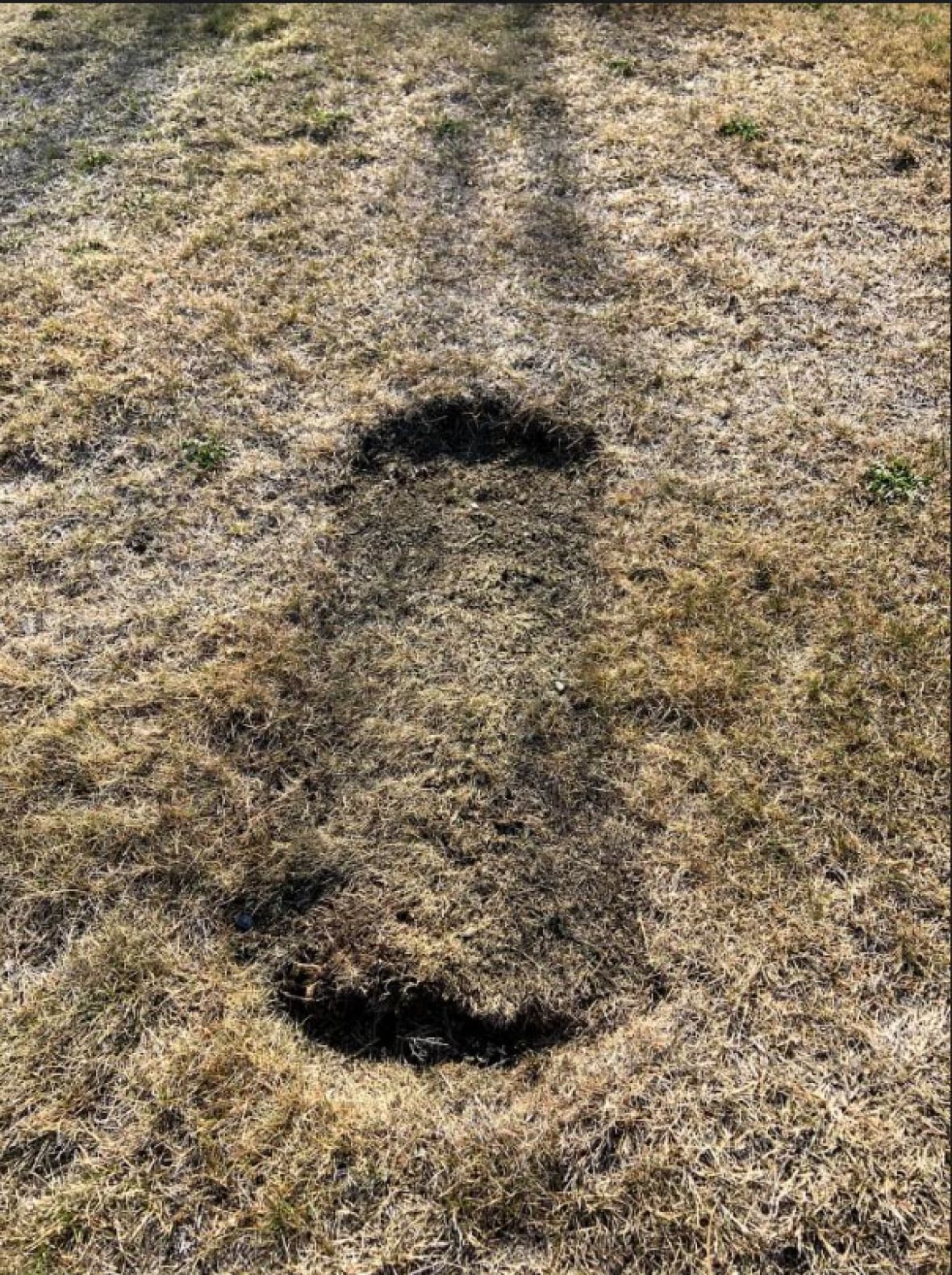 This depression was made by a SpaceX rocket tank that hit a field in Washington state. The tank was hauled away by a Grant County sheriff. (Robert Ward)

His fellow space-junk hunter, Hankey, says he suspects heavier parts of the rocket likely hit the ground farther east — perhaps as far away as Idaho or farther north.

The team has emailed Elon Musk's SpaceX company about its find — but so far — there's been no response or interest in the space garbage.

CBC reached out to SpaceX and NASA.

A NASA spokesperson said the space agency is only interested in cleaning up space debris that's still in orbit.

This article was written for the CBC by Yvette Brend.