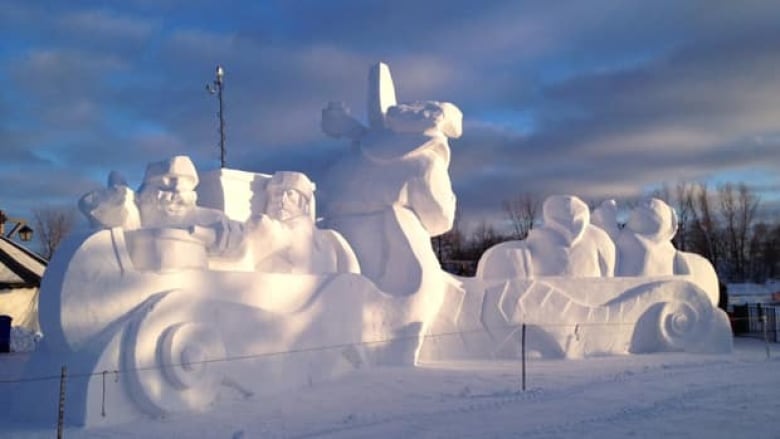 Artists from around the world come to Winnipeg every year for Festival du Voyageur’s International Snow Sculpting Symposium. (Bert Savard/CBC)

For the first time, a First Nation will be representing its people at an international snow sculpture competition based in Winnipeg.

Bronze sculptor Wayne Stranger, who is from Peguis First Nation, said he got the call last week telling him he would be a last-minute addition to the annual symposium at the Festival du Voyageur.

"I was pretty surprised," said Stranger, who has been a sculptor for about 30 years. "I've always thought about doing it for a lot of years, I just never really got around to it."

Stranger and another team from Saskatchewan were announced as contenders after two other artists — one from China and one from India — had to drop out. Festival spokesperson Nicolas Audette said team India did not give a reason and China withdrew because of visa issues.

He said making space for more Indigenous artists is part of the event's ongoing efforts to contribute to reconciliation and make sure it's creating an inclusive space.

"I think it's definitely a step in the right direction. Our festival's mandate is to promote joie de vivre within the French community and to celebrate and bring to life the fur-trade community," said Audette.

"The fur trade would not have happened without Indigenous communities. They were crucial to the survival of the voyageur."

'ONE EXTREME TO ANOTHER'

Stranger said he didn't realize at first how monumental it was for him to be representing Peguis in the competition.

"It carries a big impact," he said. "I'm trying not to think about anything until I get there and get a look at the snow."

Stranger said he's had a huge outpouring of support from people in his community.

"A lot of people are really glad I'm going to be there and cheering me on," he said.

"I just told them, 'Come on down and visit for a while and spend a little bit of time,' because that's the way I work."

Stranger said he will re-create a version of this sculpture out of snow:

"I always wanted other people to have a hand in [my art], whether they did a little bit of sketch work, a little bit of sculpture or whatever, or at least come and see what's going on, because I feed off that energy everybody else brings," he said.

Stranger said the competition will be his first time carving snow, and he's excited to see what it's like.

"With bronze, you work with 2,100-degree molten metal, and we're gonna be working in minus 20 now, so from one extreme to another," he said.

"I know there's snow sculptors that have probably been doing this most of their lives. I'll just have to sort of peek over my shoulder and see what they're doing, how they're using the tools."

Stranger and the six other teams will begin sculpting Wednesday morning at Voyageur Park. Festival officially kicks off on Friday and runs until February 23.