Well, think about this: the United Nations predicts that by 2050, if current trends continue, the world’s population will reach 9.8 billion. As a result, global demand for food and feed is expected to increase by 70 per cent, putting additional pressure on already overexploited agricultural resources.

Global demand for meat in particular will continue to increase as dietary habits in developing countries change, due to rapid urbanization and economic growth.

The oceans are already over-exploited and climate change will have a profound impact on food production. Meanwhile, nearly one billion people worldwide suffer from chronic food deprivation.

Among the possible solutions, one is quietly making its way into the public’s attention: eating insects.

To meet current and future food challenges, the agri-food sector needs to be rethought. We need to find new ways to grow food, address inefficiencies and develop new approaches to production methods.

In addition to population growth, urbanization and the rise of the middle class in developing countries are increasing global demand for food, especially animal protein. The production of traditional feed ingredients such as cereals, fish meal and oilseeds must be reduced and substitutes found to make more efficient use of resources. 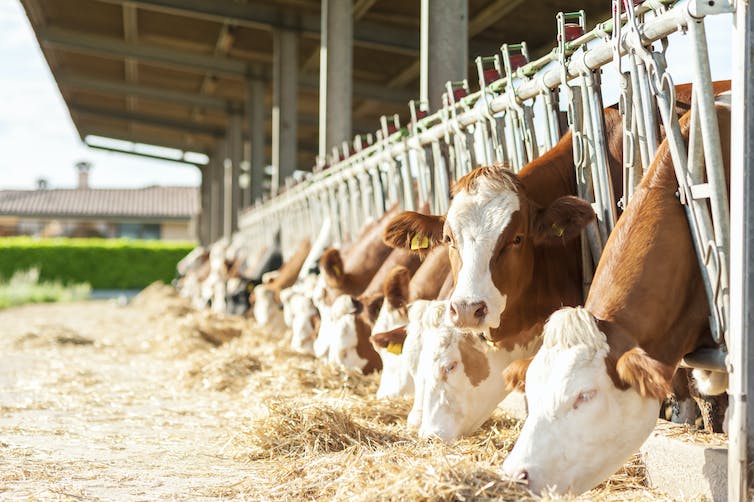 Some of the protein produced for livestock feed comes from sources that may be unsustainable and harmful to the environment. Shutterstock

The billions of animals raised each year for food are putting increasing pressure on land and water resources and contributing to climate change and other negative environmental impacts.

Livestock farming for meat production puts considerable pressure on global land and water use. At present, a large proportion of the protein produced for livestock feed comes from sources that are sometimes unsustainable and harmful to the environment.

To meet the considerable challenge of ensuring food security for the future, it is imperative to find alternative and sustainable sources of protein, both for direct human consumption and for animal feed. Insect-derived proteins are one possible solution. Insects, especially fly larvae, have many qualities that make them well adapted to animal feed.

For example, insects are already a natural source of food for pigs and poultry as well as for many fish species. In addition, insect larvae are generally high in protein and are rich in other beneficial nutrients such as fats, minerals and vitamins. 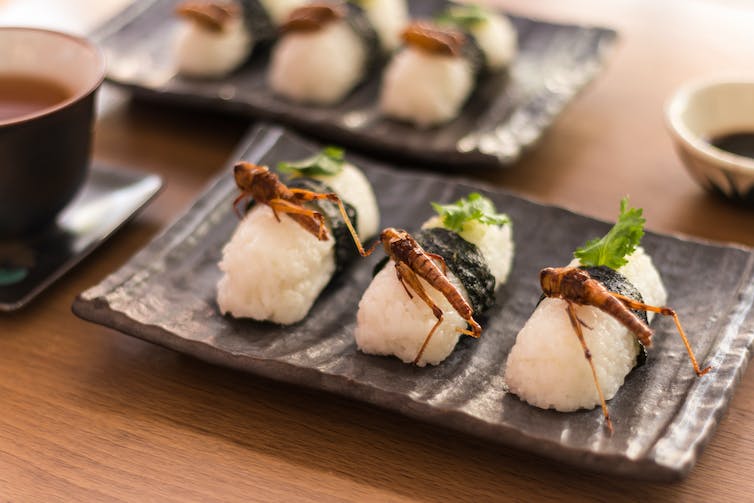 Sushi served with fried grasshoppers is popular in Thailand. Shutterstock

As a source of protein for direct human consumption, insects offer several advantages over traditional sources of meat. They have a significantly higher feed conversion rate than other livestock, which means they are more effective at converting the ingredients used to feed them into nutrients.

In addition, insect production is more environmentally friendly than conventional livestock production. Insects release much lower amounts of greenhouse gases and ammonia into the atmosphere per kilogram of meat than cattle or pigs.

Insect larvae, in particular, are efficient consumers of a wide range of organic materials. They have the ability to “over-cycle” relatively low quality organic residues as feedstock into valuable proteins and lipids. 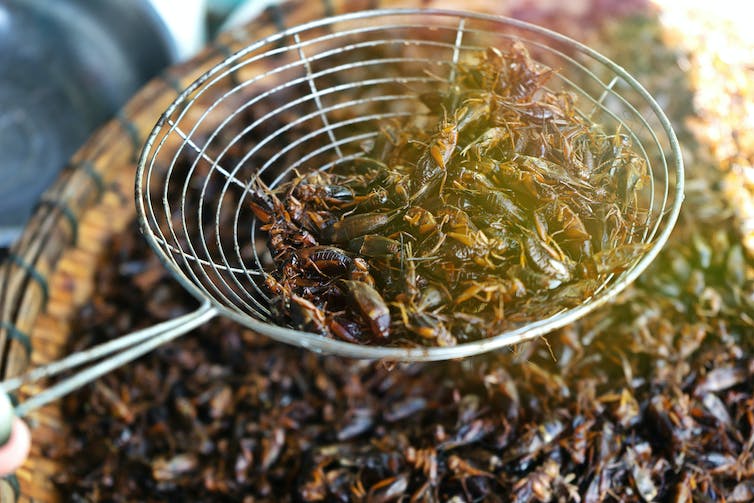 Fried insects in a street kitchen in Bangkok, Thailand. Shutterstock

Although direct human consumption of insects is not widespread in Western countries, raising insects to transform organic waste streams offers an interesting opportunity to produce food ingredients for animal production. In particular, the larvae of the black soldier fly has a nutritional profile that makes them a potential ingredient to replace traditional food ingredients intended for human consumption.

The cultivation of insects raised specifically for domestic animals and fish has been the subject of sporadic assessments for several decades. However, the widespread adoption and commercialization of these approaches remains difficult. The methods are still artisanal and have been mainly developed and deployed in emerging countries with limited resources.

However, a convergence of factors has revived interest in this area, particularly from a number of multinationals in the agri-food sector. A combination of new municipal regulations limiting organic waste disposal and the need to find sustainable ingredients for animal feed have led to renewed interest in insects and their ability to transform organic waste into valuable food resources.