Editor's Choice
Mountain Biking Adventures with a Stormhunter
In partnership with

Thursday, November 21st 2019, 11:33 am - Roads, buildings and industrial facilities rely on the integrity of the ground they’re built upon. But when soils shift or are washed away after heavy rain, severe damage can occur.

Soils are like sponges with a network of pores that allows water and air to freely enter and escape. They can be quite stiff when they’re dry and soft when they’re wet. But some soils are more vulnerable to changes in water content than others. Alternate wetting and drying causes swelling and shrinkage in some clays, whereas freezing and thawing can weaken sandy silts.

In southern Saskatchewan, irregular weather patterns due to climate change affect soil moisture and adversely impact pipelines, roads and other utilities that run along the surface or are buried underground. Unless we find ways to shore up these soils or develop other alternative methods to make these grounds more stable, we face a future of interruptions and costly repairs.

Geology, climate and environment govern the origin and evolution of soils. For example, Saskatchewan’s surface soils are made up of particles deposited from glacial meltwater streams and lakes.

Over the past 10,000 years or so, these soils have been broken down by glaciers, waters, temperatures and biological organisms (weathering) to the deposits we see today. Thick clay sediments and sandy, silty soils are common in the southern part of the province. 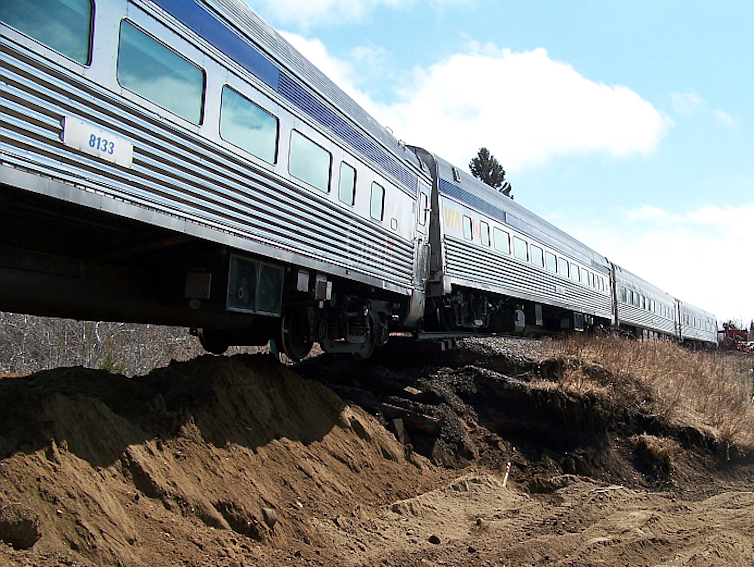 An embankment collapsed and derailed a VIA Rail train near Togo, Sask., in April 2013. (Transportation Safety Board of Canada)

Expansive soils, such as those found in Regina, contain tiny clay particles. These particles are also negatively charged, which means that when water droplets bond to the particles, they are pushed away from one another — similar to the way two magnets will repel one another when their similar poles face each other — causing the soil to expand. When the water evaporates, the particles become close again. Soils follow this cyclic behaviour during summer and fall.

A similar process occurs in sandy silts, like those around Saskatoon, during winter and spring. These soils are more porous and may be generally stable, but they can also form ice lenses (flat bodies of ice) when the water freezes. This causes heave since the volume of ice is about 10 per cent more than that of water. When these lenses melt, the amount of water locally increases and the soils weaken.

SOILS IN THE FUTURE

The southern part of the Prairie provinces form the Palliser’s triangle — a semi-arid steppe once considered to be unfavourable for farming owing to its dry climate. In recent times, the region has been dramatically affected by climate change. The severity of extreme weather conditions, like recent wetter summers, in the area have increased and it appears that the trend will continue in the future.

Read more: Urban floods: We can pay now or later

In the new norm of climate change, we need to understand the behaviour of soils in terms of more frequent and much wider variations in water content.

My colleagues and I look at several related factors in our research studies to tackle the issue of problematic soils, including local geology, soil properties, seasonal weather variations and the impacts of climate change. We’ve gone on to develop models that can forecast the behaviour of these soils under atmospheric conditions.

Our research helps others understand the different pressures various structures, such as storage tanks, residential basements, bridge piers and buried pipelines, are exposed to when they’re built into problematic soils.

The new backfill materials would be self-healing in the sense that they would be less vulnerable to swell-shrink and freeze-thaw cycles. Our aim is to modify soils near structures like storage tanks or pipelines so that they can withstand the harsh and exceedingly unpredictable climate now and in the future.