Parks Canada has announced the Trans-Canada highway running through Rogers Pass and Glacier National Park will be getting the world's largest avalanche detection network. The $3 million network will have a series of sensors that will be placed along the highway corridor to detect avalanches, as well as general snow and ice movement, said Nick Irving, Glacier National Park superintendent.

"The avalanche detection network is a key new investment as part of our avalanche safety mitigation along the Trans-Canada Highway," he told Daybreak South's Bob Keating.

"Providing our avalanche forecasting team with timely information on natural occurrences as well as information concerning how the snowpack is behaving. And we use that information to do our own forecasting ... when we have to do avalanche control to stabilize slopes either side of the Trans Canada Highway."

Parks Canada says the new system will be the first of its kind in Canada and the largest such detection system in the world.

The new detection network is part of a larger $18 million plan for avalanche mitigation in the area.

Measures that have already been implemented include, several new remote avalanche control systems and 2,200 metres of netting to keep the snowpack in place on steep terrain. 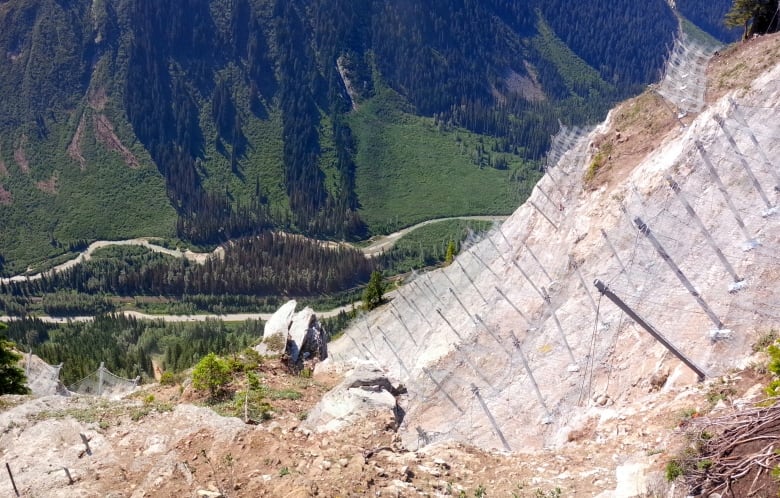 A snow net has been installed at Cougar Corner above the Trans-Canada Highway in Rogers Pass to try and help prevent avalanches from hitting the road. (Parks Canada)

Within the 42 kilometres of the Trans-Canada Highway in Rogers Pass, there are 134 avalanche paths.

The new system being installed is radar-based and operates similarly to seismic readings for earthquakes, said Irving.

Some of the information it will provide includes wind direction, snow volumes, how snow is being transported, how snow is settling and temperature behaviour.

Avalanche Warriors: the team of technicians who keep mountain highways safe "All of this information, including the work of the avalanche detection network, feeds into our team having the best available tools and information to make timely decisions on how we manage the avalanche prone slopes through the Trans-Canada Highway corridor of Rogers Pass," said Irving.

He says it will also benefit backcountry users by providing "the best available information" for forecasts and slope stability assessments.

The system is expected to be ready for testing this upcoming winter.