Jacqueline Patron is used to seeing trains slide by her backyard at the north edge of Regina.

But last week, the train may have left more than a lonely prairie beat. Just minutes after it passed north of Winnipeg Street, a grass fire started.

Neighbours began fighting the fire. A fire truck came, too, and put out the fire.

"Having tracks that close to homes and with it being so dry, yes, a little too close," said Patron.

Fire officials are still looking into the exact cause, so they cannot confirm whether or not the train sparked the blaze. Two other grass fires are also under investigation.

No matter the cause, Patron would like to see dry, tall weeds mowed down near tracks and in industrial areas to protect homes like hers on the outskirts of the city. 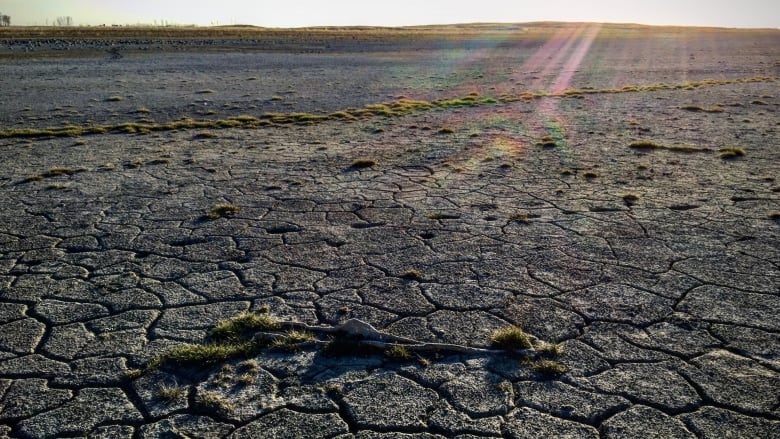 This is a slough bed near Estevan that usually covers a huge quarter section of land, according to Nyki Maisonneuve. 'Where I was standing is typically around five feet deep with water. The slough is just dust now.' Apr. 30/2021 (Nyki Maisonneuve/submitted to the CBC).

"The fuel is very dry and that contributes to the spread of fires when they start."

A grass fire a week ago on the outskirts of the city was tough to control, and firefighters needed help from the Warman Fire Department.

Ralston said it is so dry, that even a spark from welding or grinding has the potential to start an out-of-control fire. He said many R.M.s around the city have a fire ban in place.

Todd Lewis, the president of the Agricultural Producers Association of Saskatchewan, said it has not been this dry on his farm near Regina since the 1980s.

Lewis said farming practices have changed since those drought years to conserve moisture in the soil.

'We manage our water better but we still cannot replace rainfall.'

He said it is especially tough for cattle farmers, as dugout levels are low. Lewis and other farmers are hoping May and June bring rain.

John Pomeroy, a water expert with the University of Saskatchewan, said part of the problem is snowfall on the prairies came early in November. Much of the snow simply sublimated back into the atmosphere during snowstorms before it got a chance to melt into the ground.

"Ninety-three per cent of the agricultural part of the Prairies is in drought right now. This is quite severe," he said.

Those numbers are according to Agriculture Canada. Southeast Saskatchewan is described as having 'extreme' drought and much of the southern grain belt is classified as 'severe.'

Pomeroy said a drought like this in the 1930s would have been devastating, but 'we're much better prepared than we used to be.'

Still he would like to see more shelter belts and preservation of wetlands to keep moisture on the ground.

"The water resources we have are always on the edge so we have to manage them very carefully," Pomeroy said.

This article, written by Amanda Marcotte, was originally published for CBC News.