Albino raccoons have a genetic mutation that strips them of the traditional black and grey colouring. (Martin Ouellette/Churchwood Pictures)

Martin Ouellette wasn't expecting anything unusual when he went outside to snap a few photos of the raccoons who have taken up residence in his backyard.

Instead, he found that at least two of the raccoons in the family appeared to be albino — a one in 750,000 rarity.

"My mind was blown," said Ouellette, who saw the raccoons first the evening before his birthday. He called it an "auspicious omen."

"They first showed up a few weeks ago," he said. "We have a big oak tree in our backyard and I think they're nesting in there."

Unlike typical raccoons, albino raccoons have a genetic mutation that strips them of the traditional black and grey colouring. They are all-white, or off-white, including hands and feet.

Ouellette, who owns a photography studio in Windsor, spends a lot of time outdoors, photographing wildlife. He'd never seen an albino raccoon before, but said one of the two is really curious.

"He comes to the ends of the branches and looks at me," said Ouellette. He's noticed that the other raccoon siblings seem to protect the albino ones. 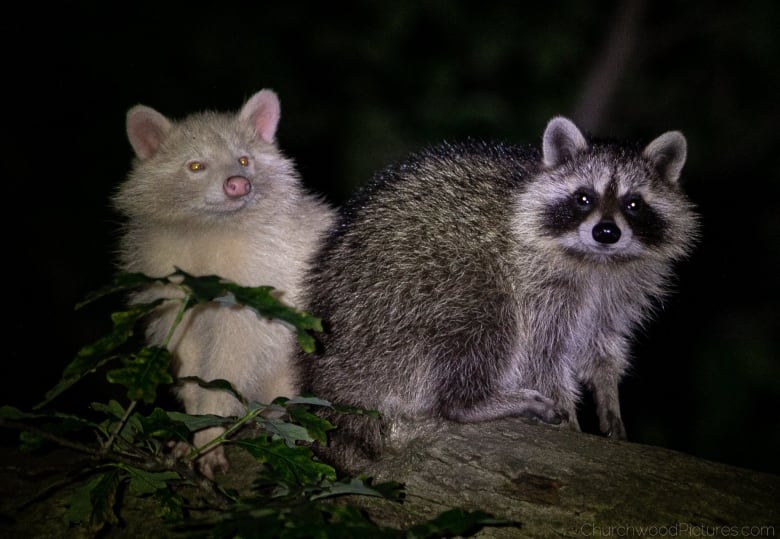 Albino raccoons have a genetic mutation that strips them of the traditional black and grey colouring. (Martin Ouellette/Churchwood Pictures)

Tom Preney, biodiversity co-ordinator for the City of Windsor, has worked at Ojibway Nature Centre for more than 15 years — and he's never seen an albino raccoon.

"It's quite rare," said Preney. "To see two together ... it would usually be just one."

Seeing an albino raccoon is rare because they usually don't last long in the wild — Preney said their colouring means they might stick out more.

"In the summer months they're going to have a hard time hiding," said Preney, who said, to his knowledge, no other sightings had been recorded in Windsor-Essex.

Wildlife experts agree that while seeing an albino raccoon in the wild is a 1 in 750,000 chance, they actually occur about 1 in 10,000 births.

The National Weather Service in the U.S. estimates that the odds of being struck by lightning is also 1 in 750,000.

This article was written for the CBC by Angelica Haggert.