As a helicopter hovers above a field in the Fraser Valley, ground crews practise how to descend into a fire zone, prepping for what could be another busy wildfire season.

"We kind of use the hover exit as a last resort if there is no other options to get into the fire," explained B.C. Wildfire Service team leader Brian Davis, who was taking part in the exercise on Tuesday.

Crews and officials across B.C. are in preparation mode ahead of the summer, following the two most destructive wildfire seasons recorded in B.C.'s history.

While Davis's comrades practise for action, several significant fires have already been sparked across the province, from Squamish and Vancouver Island to the Interior and northern B.C. 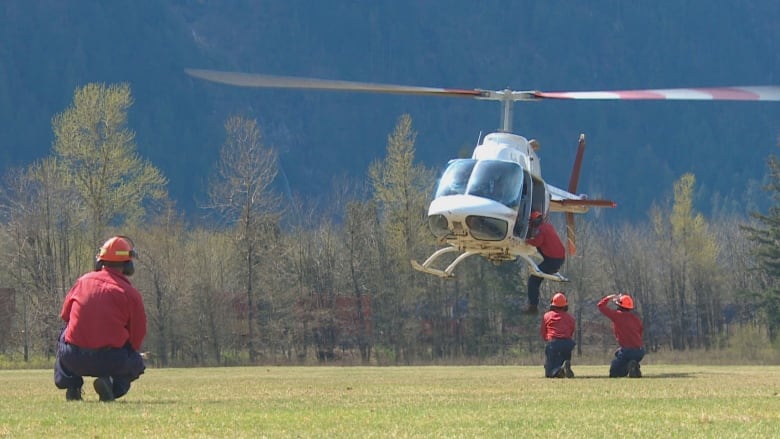 Wildfire crews practise hover exits from a helicopter. There are fears that the 2019 wildfire season in B.C. will be another destructive one. (CBC)

A fire north of Squamish, believed to be human caused, is now burning over 50 hectares, according to the wildfire service's latest update Tuesday evening.

"These ones grew a little bigger than average at this kind of time of year," said JodyLucius, the fire information officer with the Kamloops Fire Centre.

"That's really largely due to the fact that we've got quite a bit of dry cured grass in the area."

The severity of wildfires this spring depends largely on the weather and rainfall this month, she said.

In Prince George, preparations include hiring a full-time manager to handle emergency operations, a position that was brought in last spring.

"We see [wildfires] as an annual event and I'm nervous about it," said Mayor Lyn Hall. "We need to be prepared for it."

For Maureen LeBourdais, who was just elected director of Area F in the Cariboo Regional District, wildfire prep is top of mind.

"The regional district is undertaking some significant preparations just to have things in place," she said.

"They are developing a permanent emergency preparedness centre … Fire-safe work is going on around some communities."

VIDEO: HEALTH AND WEATHER | BC WILDFIRES

'WE HAVE TO BE AWARE OF THE HAZARDS'

This year has already seen one of the driest Marches on record for many areas of the province, prompting warnings from fire departments about the early dry conditions.

"If we want to live out in this wonderful area, we have to be aware of the hazards," said Stephanie Dunlop, chief of the Metchosin Fire Department on Vancouver Island.

She's urging British Columbians to be more cautious and fire aware than they would normally be this early in the season.

That includes not flicking cigarette butts out the car window, tending to barbecues and campfires with extra care, trimming foliage 10 metres back from houses and calling 911 at the sight of any fires, she said.

The future looks grim after 2 years of devastating B.C. wildfires "We just prepare our community as best we can and a lot of that right now is education," Dunlop said.

"We wish we could leave it to everyone's good judgment but there are certainly regulations."

Those regulations, including rules around open fires and reporting fires, are listed in the Wildfire Act and are enforced with fines ranging from $383 to $1,150. Campfire bans are not in effect yet.

But fire ecologist Robert Gray says it's not enough for individuals to take precautions.

Entire forests have to be thinned out and carbon emissions significantly curbed to try to reverse the wildfires which, in 2017 at least, were linked to climate change.

"Five years ago, we're looking at the climate models, we were thinking we had time," Gray said.

"Things changed just like that in 2017, 2018, and here we are in 2019. So we have to have some really big, transformational changes in a lot of different parts of the economy and society to solve this problem."

This article was written for the CBC by Clare Hennig.