Ottawa paramedics say an eight-year-old boy may have saved the life of a neighbour Monday morning.

As snow piled up around his Donald Street home, Clayton McGuire's grandmother told him to look outside the window.

To Barb Dodge's experienced eye, it was winter event to behold — a storm against which future blizzards would be compared.

And she was right.

With 12 centimetres falling every hour, and a greater accumulation than on any other Jan. 17 in the city's history, it was a winter day in the Overbrook neighbourhood worth taking in.

But it was the boy, and not his Nan, whose gaze settled on a familiar but unexpected shape crumpled in the snowbank outside the family duplex.

It was a man, only partly visible and disappearing fast. 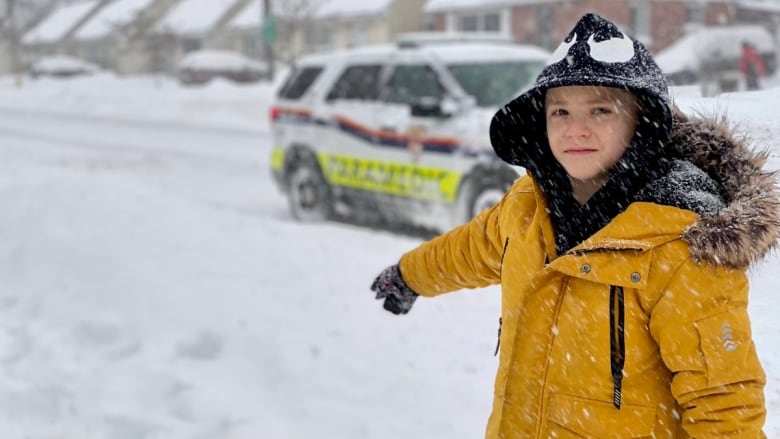 "Oh oh," said Dodge when Clayton gasped and jabbed his finger at the shape in the snow.

Clayton swiftly ran to tell his mother and father.

Once roused by his son, Joey McGuire rushed outside to assist the man, whom paramedics said was in his 70s.

McGuire guessed, by the thickness of the white blanket covering him, the pedestrian had been lying face down in the cold for 20 or more dangerous minutes.

While the McGuires helped the man to his feet and to their front steps to rest and Clayton fetched a hot drink and a blanket, paramedics arrived.

Though grateful the storm had delayed his return to class so that he might be home to spot his stricken neighbour in a time of need, Clayton McGuire was not leaping for recognition.

"I helped a guy," Clayton offered tentatively when asked how he would describe his morning to friends back in school.

"I saved someone," he added, finally, after some encouragement from his grandmother.

"I'm very proud of him," McGuire said of his son.

911 CALL CAN 'MAKE A WHOLE DIFFERENCE'

The boy's heroics caught the attention of the mayor, with Jim Watson tweeting, "Way to go Clayton! Thank you for helping this man in your community. You are an amazing and very kind person."

"Anyone who makes the call to 911 when help is required can be considered a hero," said Mollema.

"You made the whole difference."

Mollema said paramedics treated the man on site and that he declined to be transported to hospital.

Clayton acknowledged his new role as "the neighbourhood watch guy," and vowed to keep an eye out for people in need of assistance.

This article was written for the CBC by Stu Mills.