As avian influenza spreads across Ontario, officials are urging people with backyard chickens to pay attention to potential signs of infection in their flocks.

They're also warning people not to feed wild birds by hand and to ensure bird feeders are kept clean to curb potential spread of the flu.

Shayan Sharif, a professor at the Ontario Veterinary College at the University of Guelph, said bird flu is a growing problem in Ontario and across Canada.

"There seems to be more and more spread of this virus," Sharif, who researches chicken immunity, said in an interview.

"And I wouldn't be surprised if I saw more spread here in Ontario and perhaps in our neighbouring provinces, including in Quebec and Manitoba."

The Canadian Food Inspection Agency (CFIA) says there have been 11 instances of avian flu being confirmed in Ontario poultry flocks between March 27 and April 10. That includes three backyard flocks in Prince Edward County, the Township of Selwyn and the Township of Chippewas of Nawash Unceded First Nation.

As well, a wild bird — a red-tailed hawk — was found to have the flu in the Waterloo area in mid-March.

Mary Jane Ireland, Canada's chief veterinary officer, said it's been an "unprecedented year" for avian flu around the globe, with significant spread in Europe, Asia, Africa and North America. She said it's the largest number of cases in multiple provinces in recent memory and the first time Canada has seen H5N1, a highly pathogenic avian influenza strain.

When asked why avian flu has been so widespread this year, she said it's because there's a high number of wild, migratory birds with the virus.

"The environmental pressure in migratory birds is very high right now and I think that's the reason." 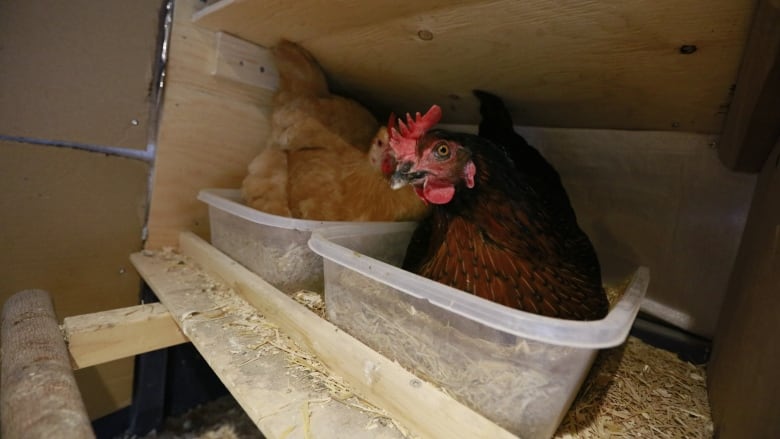 File photo shows healthy backyard chickens owned by a family in Toronto, where a pilot project allows residents to have urban hens in specific areas and wards of the city. With avian flu issues in Ontario, experts are advising people with backyard chickens to watch for signs of it among their flocks and take precautions. (Richard Agecoutay/CBC )

Avian flu isn't only a threat to large poultry farms, but it can impact backyard flocks, CFIA says. Bird owners are legally responsible to notify authorities if their animals become sick.

Ireland noted infected birds can shed the virus through saliva, nasal secretions and feces, and it can be spread through bird-to-bird contact or if the birds touch surfaces contaminated with the virus, including food dishes, a person's shoes or the tools used to clean out coops.

Ireland said steps people with backyard chickens can take to prevent wild birds from coming in contact with chickens include keeping food and water away from wild birds, and cleaning up spills so as to not attract unwanted birds.

Cleaning is also critical at this time, CFIA says on its website

"No equipment should be shared with or borrowed from other bird owners. Always clean your hands, clothing and footwear before and after handling birds."

As well, visitors to where chickens are kept should be limited, as humans can spread bird flu.

Any new chickens should be kept separate from others for at least 30 days before integrating them into the flock, CFIA says.

Owners of backyard chickens should also keep their eyes out for the following symptoms that may indicate the birds are sick:

Elizabeth Walsh, a Nova Scotia Lands and Forestry wildlife biologist, told CBC News that people with backyard bird feeders might want to consider removing them for the time being.

"Removing feeders will help stop the virus from spreading. I do realize people enjoy their feeders. However, as a bird lover, we also want to be making sure that … our wild populations are safe," she said.

Christopher Sharp, a population management biologist with the Canadian Wildlife Service in Ontario, said he's not asking people to take down bird feeders just yet.

But he does recommend against feeding ducks and other waterfowl in parks right now.

"Feeding encourages wild birds to congregate around a food source and can increase the probability of transmission among wild birds," Sharp said in an interview.

"We do still consider the use of bird feeders as safe, but they should be removed from areas that are open to poultry or other domestic animals."

Sharp said backyard bird enthusiasts should also clean their feeders more frequently. He recommends using a weak solution of regular bleach, then ensuring the feeders are rinsed well and dry before putting them back out.

When it comes to feeding some birds, like chickadees, by hand, Sharp recommends not doing that for now because "all wild birds can contract the virus."

"As much as I want to attract the beautiful birds in Ontario to my backyard, this is probably not the best time for that."